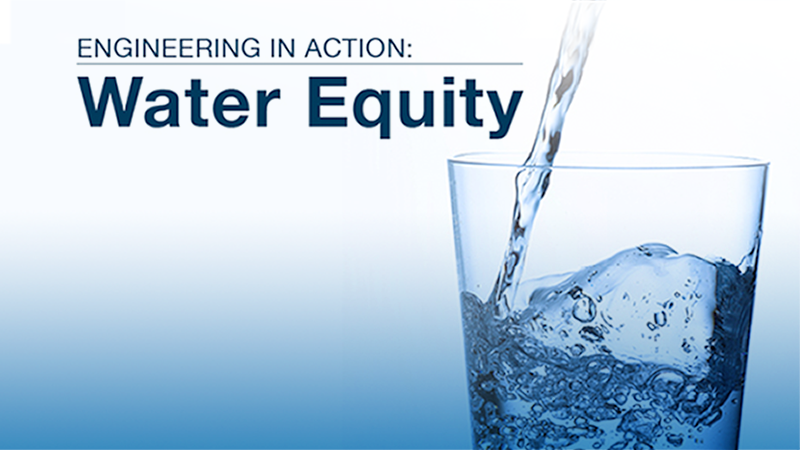 The engineering school collaborated with the UCLA chapter of the National Society of Black Engineers (NSBE) to host the Nov. 9 webinar focused on water equity. Attended by more than 200 people from around the world, the virtual event addressed issues of equity and justice in access to clean water in Los Angeles.

The hour-long discussion featured three panelists who work in different aspects of water infrastructure: Evelyn Cortez-Davis ’92, director of water engineering and technical services at the Los Angeles Department of Water and Power (LADWP); Shaily Mahendra, a UCLA Samueli professor of civil and environmental engineering specializing in water remediation; and Gregory Pierce, co-director of the Water Resources Group in the Institute of the Environment and Sustainability and the Luskin Center for Innovation at UCLA.

The event was hosted by Veronica Santos, a mechanical and aerospace engineering and bioengineering professor as well as UCLA Samueli’s associate dean of equity, diversity and inclusion and faculty affairs. David Jassby, an associate professor of civil and environmental engineering, served as moderator for the discussion.

Water equity, as defined by the group of panelists, means that the appropriate quantity, quality and information of water is provided to every resident that needs it.

“As much as we absolutely recognize and agree with water as a human right, it is also a commercial product, so there are costs associated with it and sometimes they are directly related to the inputs of resources,” Mahendra said.

Many of the costs associated with water equity in Los Angeles stem from an infrastructure that does not meet the needs of modern Angelenos.

“Historically, the original expansion of the city of Los Angeles … relied on imported sources of water because our local source at the time was the Los Angeles River and that was not able to support the growth of the city at the time,” Cortez-Davis said.

But now the focus is on decontaminating local groundwater and collecting stormwater for public consumption, she added.

Cortez-Davis brought up that, while groundwater has made up as much as 25% of the Los Angeles water supply in times of drought, much of the groundwater in Los Angeles County is contaminated from decades of unregulated handling of hazardous industrial chemicals. This means that more advanced water purification techniques will be necessary if groundwater is to become a larger percentage of the county’s water supply.

Collecting stormwater will also be a challenge because of climate change, Cortez-Davis said. Stormwater-capture technology will need to undergo some major changes as the current trend of getting more precipitation in shorter periods of time continues.

As LA County seeks to minimize imported water through groundwater and stormwater collection, advanced technology will be increasingly important to water systems. But such advancements come at a cost.

“When elected leaders are knowledgeable and engaged in water issues, everybody wins,” Cortez-Davis said.

“Expanding or restoring access to that resource is actually requiring a significant investment of dollars,” Cortez-Davis said. “We’re talking about a half a billion dollars of investment.”

As the largest municipal water and power utility in the nation, LADWP has the potential to undertake such projects, but there are more than 200 water systems in Los Angeles County alone.

As Pierce noted, “Each of them really are responsible for that human right to water, making water high quality, affordable and accessible; but they have very different capacities, capabilities and sometimes interests in really delivering on that.”

Moreover, there are factors outside the utility companies’ jurisdiction that affect water quality, such as the location of a neighborhood or the age of the water pipes in the buildings, Mahendra added.

While issues regarding utility companies’ abilities to provide water equitably may be met through funding from private investors, taxpayer dollars will also be a significant portion of the funding pool. Such public support requires water systems to engage with the community.

“Looking to give targeted information, seek key feedback and also show how that feedback is valued I think are some of the steps that need to and are beginning to be taken by certain water systems, but we also need to see more,” Pierce said.

“When elected leaders are knowledgeable and engaged in water issues, everybody wins,” Cortez-Davis said.

The webinar can be viewed in its entirety on UCLA Samueli’s YouTube channel.

Previous “Engineering In Action” programs have covered equity in artificial intelligence and in transportation.