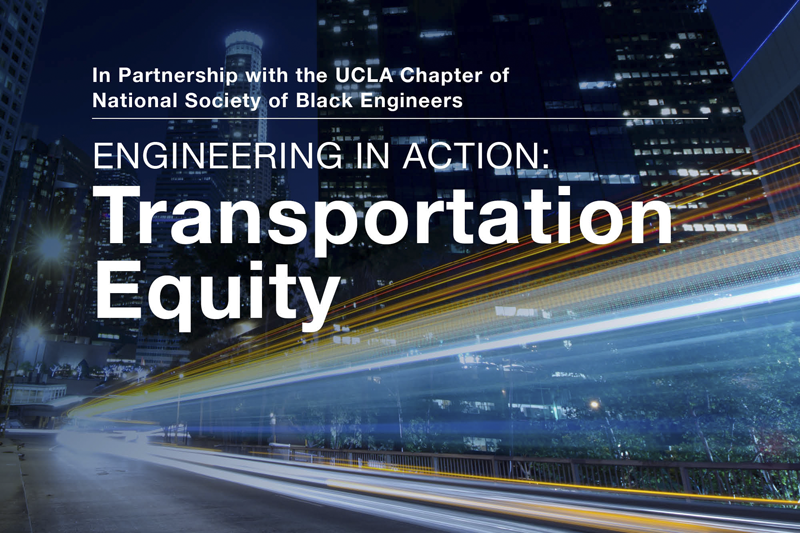 UCLA Samueli Newsroom
As part of a renewed commitment to increase equity and diversity in the fields of engineering and computer science, the UCLA Samueli School of Engineering hosted in spring the second of a three-part “Engineering in Action” series designed to address issues of inclusion and fairness as they relate to engineering and science.

As with the first event that focused on equity in artificial intelligence, the engineering school collaborated with the UCLA chapter of the National Society of Black Engineers (NSBE) to hold the May 20 webinar on transportation equity.

Mechanical and aerospace engineering professor Veronica Santos, who is also UCLA Samueli’s associate dean of equity, diversity and inclusion and faculty affairs hosted the event. The panel discussion was moderated by Audrey Pool O’Neal, director of Women in Engineering at UCLA and an adjunct professor of mechanical and aerospace engineering. Attended by more than 100 people from around the world, the virtual event addressed issues of equity and justice in transportation policy in Los Angeles, and ways to ensure a more holistic approach to transportation and infrastructure decisions.

“When I look at a map of freeways in today’s Los Angeles, it looks nothing like a master plan that was drafted by the California Division of Highways in the late 1940s,” said Avila, who also teaches history at UCLA. “According to that master plan, no community in the Los Angeles urban region was to be more than four miles from a freeway on-ramp, but clearly that’s not the case, and the freeways that exist today reflect roughly about one-third of what that master plan was supposed to be because of many protests in different parts of the city.”

Beverly Hills defeated a highway project in 1975 that would have run through its center. However, residents of Boyle Heights, largely Hispanic and working class, watched six freeways cut through its neighborhood over the years, including two massive interchanges less than two miles apart. Avila argued that even though both communities protested in similar ways, the residents in Beverly Hills prevailed due to their wealth and their connections in city government.

“Right there to me is a signal of the kind of racial and class inequality that structured the freeway system we know today in LA,” Avila said.

“A significant amount of my learning about transportation and its inequities is experiential,” Liban said.

When it comes to current and future projects, including the Metro D Line (Purple) that will soon serve the UCLA community, Liban commented on making decisions with environment and community voices in mind.

“Because of the activism of our stakeholders, we’re able to actually build this transportation system in the most sustainable and resilient way,” said Liban who received his doctoral degree in environmental science and engineering from UCLA. “We have set policies in the agency, for example, to use the cleanest and greenest pieces of equipment in building our projects to reduce the amount of air-quality issues.”

“I’m a proponent of accessible public transit, but it must be tailored to the specific needs of local community based on meaningful community engagement,” said UCLA alumna Patterson who will join the UCLA Samueli faculty in fall of 2022 as an assistant professor of civil and environmental engineering. “I came to truly understand the human consequences of transportation-related policies and practices through the work of Black women environmental justice organizers.”

Avila suggests that in addition to traditional forms of activism, it is also important to pay attention to art and literature used to depict people’s experience. Pointing at a painting behind him by a Mexican American artist, Avila said the artist was part of a generation of Chicano and Chicana activists who through their literature depicted the trauma that Boyle Heights experienced during the age of the freeway construction.

“There is a rich body of muralism, literature and poetry from Mexican American men and women who took it upon themselves to document the environmental degradation that happened in their neighborhood,” Avila said. “There has to be room to listen to nontraditional modes of protest from the people who experienced these kinds of infrastructural trauma firsthand.”

Liban concurred. He said he has gained a significant amount of his learning about transportation and its inequities riding the bus with multiple connections to work or while dropping off his son at school before the pandemic.

“A significant amount of my learning about transportation and its inequities is experiential,” Liban said. “It’s the things I hear about when I’m sitting with the bus riders and standing on the corner of Expo and Western.”

“I’m a proponent of accessible public transit, but it must be tailored to the specific needs of local community based on
meaningful community engagement,” Patterson said.

Patterson cautioned a continued emphasis on automobile-dominated transportation system designs that prioritize cars and roadways, and that a new design paradigm in transportation and infrastructure planning is needed.

“A barrier is in funding and investments,” Patterson said. “Since the 1980s, we have this kind of practice of the 80-20 rule with federal legislation where 80% of funding goes to roadways and 20% goes to public transit… so we need to start with funding mechanisms as well as the prioritization of our transportation planners and engineers.”

Panelists welcomed an interdisciplinary and intersectional approach to address transportation issues, such as zoning, safety, alternative modes of transportation, telecommuting, re-thinking open spaces and even removal of highways.

“Equity means equal access to all parts of the city from all parts of the city, and equal responsibility for sharing the burden from infrastructural costs,” Avila said. “Drivers, bus riders, metro riders and pedestrians should all have an equal stake in transportation development moving forward.”

The entirety of this webinar can be viewed in this YouTube video. Stay tuned for the third installment of the Engineering in Action series this fall.