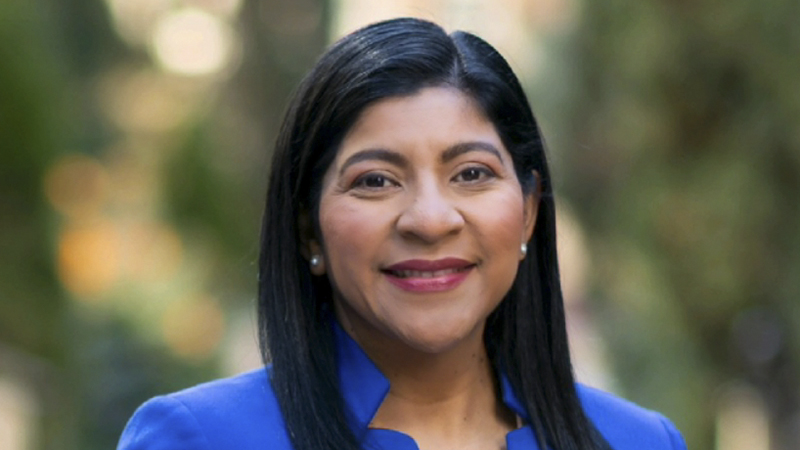 UCLA Samueli Newsroom
When Evelyn Cortez-Davis ’92 was 12 years old, she and her family fled El Salvador, traveling through Guatemala and Mexico to reach Los Angeles.

As her home country was being ravaged by civil war, Cortez-Davis, with her three sisters and her mom, made the treacherous journey familiar to many undocumented immigrants who had to flee their homeland for a chance of a better life.

Cortez-Davis has come a long way from being an undocumented child constantly looking over her shoulder. She is now a licensed professional engineer in California and recognized as a board-certified environmental engineer by the American Association of Environmental Engineers and Scientists. She is also the first Latina and second woman to be appointed director of water engineering and technical services at the Los Angeles Department of Water and Power (LADWP) — making her the highest-ranking Latina engineer at the largest municipal utility in the U.S.

Looking back at the long journey, Cortez-Davis is both grateful for, and humbled by, the opportunity that enabled her and her family to live the American dream. “I am a proud American citizen and a former undocumented immigrant,” Cortez-Davis said. “The American dream lives and I am the proof! I have contributed to the economy in ways I never imagined possible because I was afforded a path to legalization.”

When Cortez-Davis first started attending middle school in LA, she was far behind her peers in her seventh-grade class. Her language barrier placed her in remedial math courses and required her to work that much harder than her classmates to catch up and earn high grades.

But she was determined to succeed. With the support of her family and teachers, she began making strides in her education. At home, Cortez-Davis’ uncles made sure they only spoke English and, at school, teachers encouraged her to speak up and ignore the occasional mocking and judgment from her peers, bolstering her confidence in using her voice.

As she moved into her high school career, however, math continued to be a struggle for Cortez-Davis.

“As everyone else in my senior year of high school was preparing for the AP calculus exam, I was still grappling with trigonometry,” Cortez-Davis recalled. “But I didn’t give up. My amazing chemistry and AP biology teacher, Mrs. Anna Cohen, saw potential in me and pushed me to participate in science field trips and pursue higher-level STEM courses. Ultimately, she was the one who convinced me to apply to UCLA.”

She ended up graduating 10th in her high school class with a 4.3 GPA. However, the college application process proved to be particularly difficult for Cortez-Davis, who, along with her entire family, was still undocumented at the time. She only applied to one school and even that posed a challenge — from scraping together the application fee for UCLA to deciding what personal information, and how much of it, to disclose.

“My college application presented a risk of deportation not just for me but for my entire family,” Cortez-Davis said. “But it was a risk worth taking.”

Much to her relief, she was accepted. Even still, throughout her first few years at the UCLA Samueli School of Engineering, there was always an undercurrent of fear and anxiety.

“I had to assume that everyone posed a threat to my situation and my family’s,” Cortez-Davis said. “Although I made friends, keeping this secret often made campus feel like a very lonely place.”

“Against my better judgment, I showed up to the meeting to try to get answers to some of my questions about rules and expectations — who I could trust, what to do about financial aid,” Cortez-Davis said. “I was hit with regret as soon as I walked in and saw classmates I knew. We were all throwing away our anonymity, and the shared sense of embarrassment and fear was palpable. None of us spoke about it afterward.”

With the passage of the Immigration Reform and Control Act of 1986, Cortez-Davis and her family were able to begin the amnesty application process to gain permanent residency just as Cortez-Davis was starting her freshman year at UCLA. In the interim, she was able to secure provisional status that allowed her to work on campus. It wasn’t until her third year that she and her family were finally granted amnesty and became legal residents.

“I chose to be a civil engineer because I want to change the world,” said Cortez-Davis.

When she first started at UCLA, Cortez-Davis didn’t quite know what she wanted to do after college. But she knew she wanted to help protect the environment and so she decided to focus her studies on water resources and environmental engineering.

Working two jobs every quarter in addition to her rigorous course load, Cortez-Davis was constantly juggling multiple priorities. Nevertheless, she managed to form study groups with fellow students in the Society of Latinx Engineers and Scientists (SOLES), UCLA’s student chapter of the Society of Hispanic Professional Engineers (SHPE). She was a founding member of its K-12 outreach program in the early 1990s, arranging visits to local schools to provide math and science tutoring and organizing STEM events for students in underserved communities in LA. The effort, which continues to expand and evolve to this date, helps provide elementary and middle school students with consistent and positive interactions with UCLA engineering students, many of whom are from the same neighborhoods.

Cortez-Davis and her classmates also designed water park rides and took part in the American Society of Civil Engineers’ concrete canoe competition. After five years, she graduated from UCLA Samueli with a degree in civil engineering and was student speaker at the school’s commencement before embarking on a long career with LADWP.

“I chose to be a civil engineer because I want to change the world,” Cortez-Davis said. “As a basic need, water unites all human beings on Earth and this was the best kind of motivation for me.”

Since 1992, Cortez-Davis has risen through the ranks, playing different roles at LADWP. She has worked in pipeline design and construction, environmental compliance, water conservation, water quality, recycled water and water rights, as well as groundwater remediation and planning. As assistant director of water operations, she led a team that safely treats, stores and delivers reliable water service to the 4 million residents of LA. She also spearheaded efforts to clean up the San Fernando Groundwater Basin by managing the department’s $500 million remediation strategy.

“I wanted to be a public servant in the city where most of my family lives,” Cortez-Davis said. “My UCLA engineering education was the foundation that helped launch my LADWP career and built the analytical skills that I still use today to bring reliable water service to Angelenos.”

“CEED gave me networks, tutoring, study groups and other resources that helped me tremendously,” Cortez-Davis said.

In her new role, Cortez-Davis and her team are working to reduce LA’s dependence on purchased imported water from hundreds of miles away. “Our next big challenge is the transformation of the city’s water supply to local sources. It took more than 100 years to build the existing infrastructure, and it will take true innovation to achieve this long-term change,” Cortez-Davis said. “We have bold plans to transform our supplies to purify recycled water safely and efficiently and convey it throughout the city over the next 20 years.”

Despite a busy career, Cortez-Davis never forgets those who helped her become who she is today and is dedicated to using her experiences to uplift others in similar situations. In 2005, Cortez-Davis published her book, “December Sky: Beyond My Undocumented Life,” which chronicles her family’s immigration story, including her fear of living as an undocumented student and her journey to U.S. citizenship. She said she hopes her experience can help those in despair to find courage.

For nearly three decades, Cortez-Davis has volunteered whatever free time she could find to speak at career fairs and encouraging underrepresented youth, especially girls, to pursue careers in science and engineering. Nowadays, she often brings her daughter, a high school senior, along to participate in these events.

“Women’s voices in STEM are helping bring together diverse ideas to solve today’s complex problems. Right here in Los Angeles, women are leading as researchers, educators, engineers, scientists, technology innovators and more,” Cortez-Davis said. “The key is to inspire girls to maintain their interest in STEM fields beginning at a young age, through middle school and into high school and their college years.”

At LADWP, Cortez-Davis helped launch the Society of Women Engineers (SWE) and SHPE chapters to support its employees and influence the next generation of engineers and STEM professionals.

In 2006, Cortez-Davis was honored with the UCLA Center for Excellence in Engineering and Diversity (CEED) Advocacy Award, an organization to which she credits much of her success.

“CEED gave me networks, tutoring, study groups and other resources that helped me tremendously,” Cortez-Davis said. “I was used to walking into huge classes and being the only Latina student. While this was oftentimes overwhelming, the community CEED provided gave me the support I needed to thrive. And these days, I continue my work with CEED by connecting with incoming students so they can interact with someone who looks like them, has been in their shoes and has made it.”

As a first-generation immigrant and the first in her family to graduate from college, Cortez-Davis knows firsthand how hard it is for girls to pursue a STEM education. “Many students may feel that STEM fields are out of reach because math is not their favorite or best subject. I know because that was the case for me,” she said. “The good news is that math is a skill and it can definitely be improved with practice. So keep up the practice and don’t rule out your interests!”