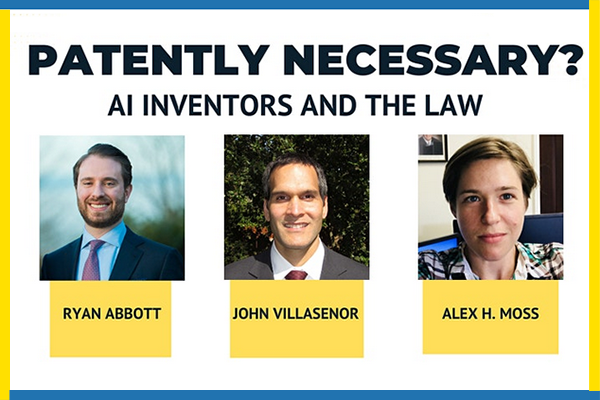 About this event
Artificial Intelligence is rapidly becoming a part of our everyday lives and is the driving force behind a growing number of new technologies. But who gets the patent when an automated system creates its own invention? Current US law requires that an inventor must be a human, even though an increasing amount of innovation is actually done by machines. Should these machines be eligible to qualify as “inventors” under patent law? There are billions of dollars underlying this question, which is currently being considered by the U.S. patent office, as well as by counterparts around the world.

The event will feature two panelists to discuss this question, both of whom are outspoken advocates for reforming America’s patent system:

Ryan Abbott, MD, JD, MTOM, Ph.D. is Professor of Law and Health Sciences at the University of Surrey School of Law and Adjunct Assistant Professor of Medicine at the David Geffen School of Medicine at UCLA. He is the author of The Reasonable Robot: Artificial Intelligence and the Law published in 2020 by Cambridge University Press, and he has published widely on issues associated with law and technology, health law, and intellectual property in leading legal, medical, and scientific books and journals. Managing Intellectual Property magazine named him as one of the fifty most influential people in intellectual property in 2019. Professor Abbott is a mediator and arbitrator with JAMS and a panelist with a variety of national and international dispute resolution service providers.

Alex Moss is a co-founder and the executive director of the Public Interest Patent Law Institute. Alex previously worked as a staff attorney and the Mark Cuban Chair to Eliminate Stupid Patents at the Electronic Frontier Foundation. Prior to that, she was a patent litigator at Sullivan & Cromwell and Durie Tangri. After law school, she clerked for the Honorable Timothy B. Dyk of the U.S. Court of Appeals for the Federal Circuit. Before law school, Alex worked for independent record label Rough Trade. She received her J.D. from Stanford Law School.

John Villasenor is a professor of electrical engineering, law, public policy, and management at UCLA and a nonresident senior fellow at the Brookings Institution. Professor Villasenor’s work addresses the intersection of technology, policy, law, and business, with a focus on topics including digital communications, artificial intelligence, cybersecurity, and privacy. He is also a member of the Council on Foreign Relations and an affiliate at the Center for International Security and Cooperation (CISAC) at Stanford. He has published in the Atlantic, Billboard, the Chronicle of Higher Education, Fast Company, Forbes, the Los Angeles Times, the New York Times, Scientific American, Slate, the Washington Post, and many academic journals.

The event is free and open to all:
https://www.eventbrite.com/e/patently-necessary-ai-inventors-and-the-law-tickets-168788114795