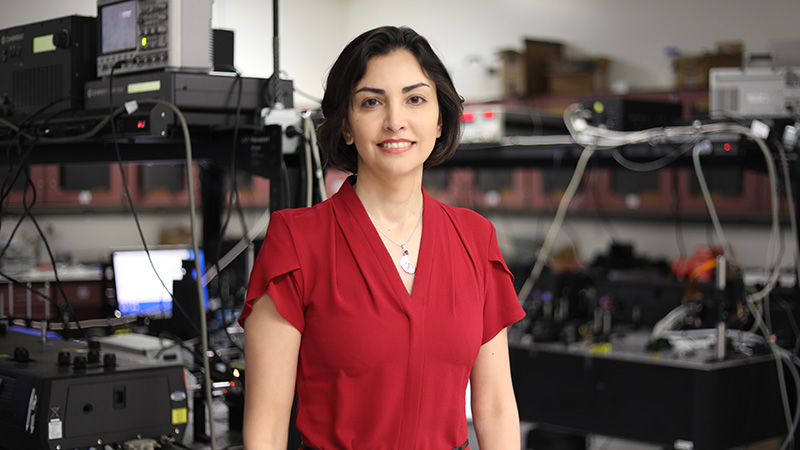 UCLA Samueli Newsroom
Mona Jarrahi, a professor of electrical and computer engineering at the UCLA Samueli School of Engineering, has been selected as the new Northrop Grumman Endowed Chair holder, effective July 1, for her contributions to low-terahertz and high-millimeter wave electronics.

Established in 1988, the permanent chair position was made possible thanks to a gift from the Northrop Grumman Corporation designed to provide teaching and research support for a faculty member who specializes in high-speed electronics with an emphasis on microwave and millimeter wave electronics. Jarrahi succeeds UCLA Samueli electrical engineering professor Tatsuo Itoh, who died in 2021.

A member of the California NanoSystems Institute at UCLA, Jarrahi has contributed to the development of ultrafast electronic and optoelectronic devices, as well as integrated systems for terahertz and millimeter-wave sensing, imaging, computing and communication systems by utilizing novel materials, nanostructures and optical concepts.

Jarrahi joined UCLA in 2013 and is the director of the Terahertz Electronics Laboratory. She has received many prestigious awards, including the 2021 A F Harvey engineering research prize from the U.K.-based Institution of Engineering and Technology, the inaugural Moore Inventor Fellowship from the Gordon and Betty Moore Foundation, and a Presidential Early Career Award for Scientists and Engineers in 2013 — the country’s highest honor for researchers in the early stages of their careers.

Prior to UCLA, Jarrahi was a postdoctoral scholar at UC Berkeley before becoming an assistant professor at University of Michigan-Ann Arbor. She received her bachelor’s in electrical engineering from Sharif University of Technology in Tehran, Iran, and earned both her master’s and doctoral degrees in the same field from Stanford University.