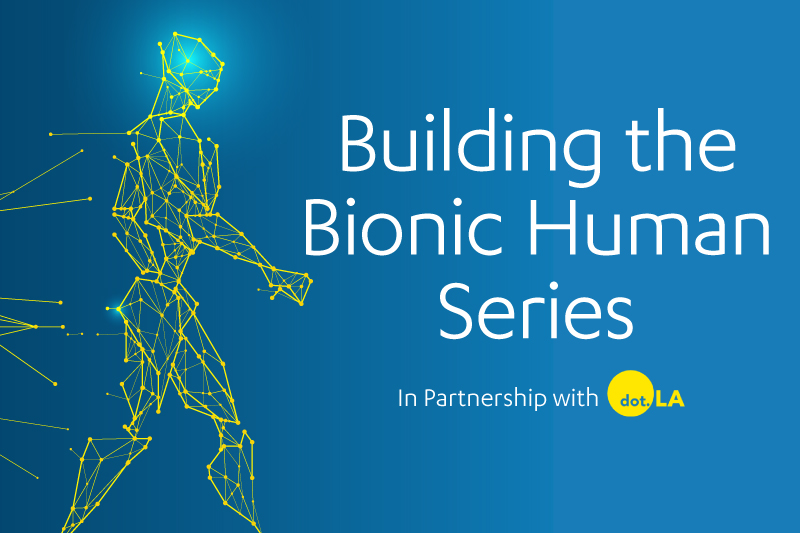 A “bionic human” may sound like something straight out of science fiction, but through groundbreaking research and technological advancements, UCLA engineering and medical experts are making it a reality. A four-part series titled “Building the Bionic Human” kicked off November 19 with a cross-campus panel on the future of prosthetics featuring renowned UCLA faculty.

The Zoom webinar explored ways by which biological functionality can be recovered with improvements in prosthetics and neurotechnology. More than 250 students and alumni attended the virtual event, which was a collaboration between the UCLA Samueli School of Engineering and the David Geffen School of Medicine.

The study of bionics involves research and analysis of mechanical systems that can function like living limbs. Building a bionic human requires applying bionics to the human body in order to help improve quality of life by restoring lost or impaired abilities.

“In our work, merging machine and the mind is an endeavor to help people regain the control, freedom and independence that they may have lost as a result of neural injury or disease,” said panelist Jonathan Kao, an assistant professor of electrical and computer engineering.

The panel featured Kao; Tyler Clites and Veronica Santos, who are both from the Mechanical and Aerospace Engineering Department of UCLA Engineering; and UCLA School of Medicine surgeon Dr. Kodi Azari and neurologist Dr. Steven Cramer. The conversation was moderated by mechanical engineering alumnus Nick Desai, co-founder and CEO of Heal.com.

The group discussion focused on the integration of prostheses with the nervous system. Thanks to recent developments in decoding neural activity and the creation of neural prostheses, panelists said they have high hopes for the future of prosthetics.

In his introduction, Azari explained that because existing prosthetics are not as functional as innate body parts, many amputees decline to use them. However, he said, as prosthetics become better integrated with the nervous system, there is considerable potential for creating prosthetics that patients can truly use.

“Our aim is to go beyond the traditional paradigm of robots as teleoperated tools,” Santos added. “We want to achieve human embodiment of a robot by directly connecting human neural systems to technology in real time.”

Through recent research and experimentation in areas such as pattern recognition and biomarkers, the panelists said they are making huge breakthroughs in the functionality of prosthetics. According to Clites, this heightened functionality is key to merging prosthetics into a patient’s sense of self.

The panelists also highlighted both the close proximity between the engineering and medical schools at UCLA and the unique collaborative atmosphere, which enable a multidisciplinary approach to tackling challenges.

“It’s powerful to be able to just take a five-minute walk and to be talking to a collaborator and expert on a topic,” Kao said.

Clites said that UCLA’s collaborative environment is pivotal to the future of prosthetics, with many technologies created in isolation ready to be integrated into complex systems.

Underscoring the multidisciplinary nature of bionics, Cramer noted that “you need the brain to optimize the success of prosthetics.”

In the second panel of the series, titled “Neuroengineering Therapeutics: From Spinal Cord to Organ Function,” which was held on December 2, UCLA engineers and neurologists discussed advancements in engineering the nervous system. Over the coming months, the series will continue to delve into aspects of bionics, including biological functionality, restorative therapies and robotic awareness in the panels “The Future of Prosthetics: Memory, Vision, andCommunication” on January 27, 2021 and “How Close are We to the Bionic Brain?” scheduled for late February.

Registration is now open for the series and advance questions for the panelists can be submitted.