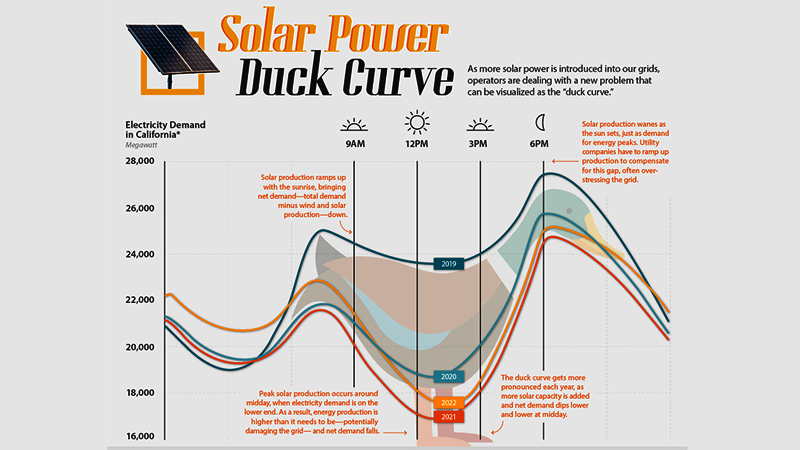 A graph of power production over the course of a day, dubbed the duck curve, showing the growing imbalance between peak demand and renewable energy production

As California and much of the West continue to grapple with the scorching heat wave that has shattered many records and wreaked havoc on the power grid, there are growing concerns for rolling blackouts and increased wildfires.

Rajit Gadh, a professor of mechanical and aerospace engineering at the UCLA Samueli School of Engineering and director of UCLA’s Smart Grid Energy Research Center, has studied the supply and demand of the electric grid, as well as the role electric vehicles can play in easing the system. He shared his insights this week with many media outlets, including the Washington Post and Spectrum News 1. We sat down with Gadh to learn more about the subject and his ideas for some long-term solutions.

Q: On Sept. 7, the California Independent System Operator, which oversees the state’s electric grid, sent an emergency text asking everyone to lower their electricity usage to avoid exceeding supply. With the additions of renewables to the grid, even with the unprecedented demand, why did we edge that close to rolling blackouts?
A: We are seeing high highs and high lows in our energy consumption, and unfortunately, we are here today because we have been behind in our transition toward clean energy and transportation. The growing number of high-heat days has drastically increased the load on the grid, especially during the evening hours of 4 to 9 p.m. — the peak load hours when there is significant use of air conditioning and other household appliances as people return home from work.

On these high-heat days, the total amount of power consumption during the peak load hours starts to approach the total dispatchable capacity that the grid operator has and therefore there is a risk of rolling blackouts, which are unplanned power outages that can affect anyone. Complete loss of power is not something anybody wants and so with flex-alerts and messaging, electricity consumers are asked to voluntarily reduce their loads during peak hours.

Q: What can people do to help ease the stress on the power grid during such heat events but still manage to stay cool?
A: Californians can try to consume less electricity from 4 to 9 p.m. when demand for power is at its peak during extreme heat events, such as those we have experienced in recent days. Some of the changes they can implement include increasing the temperature setting for the thermostats from 70 to 78 degrees Fahrenheit, which still keeps us cool and results in a significant reduction in energy consumption. Certain high energy-consuming appliances such as electric  dryers can use as much as, or even more, power than an air conditioner, so utilizing them outside of those hours can help. Next in line would be dishwashers, which also consume significant amounts of power. Finally, charging electric cars outside peak hours, which is easily achievable for the vast majority of people who use their vehicles for work during the day, so they can change the charging schedule settings within the vehicle to after peak hours. In general, turning off any appliances during peak hours is helpful.

In the last several high-heat days, many of these measures have been adopted and thanks to the willingness of the public to cooperate, they have been by and large effective in preventing rolling outages. But if the number of days of high heat continues to increase in the future, a purely voluntary approach may not be sufficient and financial incentives may be needed.

“Pre-cooling the house before peak hours shifts a lot of the energy consumption to before the peak hours, and enables residents to achieve comfort while helping the grid operator,” Rajit Gadh said.

Q: With global warming, heat events are likely to be more often and extreme. How can we better prepare for the next heat wave so folks do not worry about inadequate air conditioning and power outage?
A: Looking into the future at the next heat wave, which is highly likely to occur a year from now, there are several things we must plan for right away so that we are better prepared when the time comes. Changing temperature set points in thermostats for air conditioners ahead of time would help tremendously. Pre-cooling the house before peak hours shifts a lot of the energy consumption to before the peak hours, and enables residents to achieve comfort while helping the grid operator. For those who do not have programmable thermostats, chances are that their electricity provider would supply those for free. For example, my electric utility not only gave me a smart thermostat for free, they also did an inspection of my Heating Ventilation and Air Conditioning (HVAC) system, performed fine tuning to optimize the equipment for higher efficiencies and replaced the air filters for free. Now, I can use a smartphone to monitor, control and program my HVAC. It is also important to replace regular light bulbs with LED lights, which consumes less power.

The utilities, for their part, offer incentive programs called demand response whereby their customers get compensated for reducing the load, and by having customers participate in such programs, utilities can better plan and prepare for high heat events.

“An electric vehicle is essentially a rolling battery. When the car is parked and connected to the grid, it can also provide power,” Gadh said.

Electric vehicle (EV) owners can and should, in advance of heat events, program their charging time to occur after midnight when the load on the grid falls significantly. An electric vehicle is essentially a rolling battery. When the car is parked and connected to the grid, it can also provide power.

Q: Is it possible to have an economy fully reliant on sustainable energy? And if so, where are we now on that path, and how will electric vehicles play a role?
A: Renewable energy with 100% zero emissions plug-in transportation is a solution that is not only possible but we are well on the way toward that goal for all vehicles to be zero emissions — from cars and trucks to buses.

Some of the newer electric cars in the market have the ability to discharge power into the grid, at the choice of the vehicle owner. This is called Vehicle-to-Grid, or V2G — an emerging tech that I have been researching for over a decade as head of UCLA’s Smart Grid Energy Research Center. The reserve power needed by the utilities during extreme heat events is about 5 to 10% of the grid load. If all of the current 1 million electric vehicles on the road in California were outfitted with this capability and appropriate financial incentives existed, the battery resources of all these EVs combined would easily be able to provide the reserve support for the high-peak hours on the high-heat days when energy is most needed.

Q: Aside from contributing to the state’s electric grid itself, how can electric vehicles help address energy demands for individual homes?
A: Electric vehicle batteries can be used as backup reserve energy sources to power your home for up to one week. They can power your air conditioning when the grid goes down on hot days or be used in the evenings to light up your home at night when you don’t have solar energy to light up the space.

Q: Can you further break down how anticipated improvements in battery technologies and the continuing adoption of electric vehicles contribute to the energy availability, especially during periods of extremely high demand? And how could that work with additional renewable energy generation increasingly coming into play?
A: During the peak energy use hours of 4 to 9 p.m., we use approximately 50 GW of power per hour from the state’s energy grid, meaning 250 GWh are needed in that part of the day. During the rest of the day, we use 40 GW per hour, meaning that to power California for the other 19 hours in the day, 760 GWh are necessary. Thus, in one full day, Californians use about 1000 GWh of energy.

By 2035, if California meets its zero-emission vehicle standards, the 30 million electric vehicles on the road by then would make available 375 GWh of energy. Plus, by 2035, the battery size in electric vehicles should double, which could mean up to 750 GWh of energy storage. Electric vehicles, alone, could store enough energy to power the energy grid for most of the day with intermittent energy. But during the day, the sun also provides energy through solar power, meaning batteries — such as those in electric vehicles — would not be required for power during daylight hours and could be used solely at night.

So basically, in about 12 years, 100% of the California grid can be powered by renewables including solar and wind, as well as electric vehicles, with no other source of energy needed.

Q: With regard to adopting renewables into the grid, how does California stand in relation to the rest of the U.S and the rest of the world?
A: First, it’s important to note that the electric grid and the basic technologies that underpin it are more than 100 years old. In the midst of this global climate emergency, we’re trying to incorporate new technologies and new, cleaner and sustainable energy sources in this old system. And that’s going to take some time. But certainly we’re on the way there. Specifically with regard to California, we have been taking the lead for some time, here in the U.S. and globally. That’s through policies that encourage and even mandate changes, and through the collective of individual early adopters of cleaner technologies such as electrical vehicles, or solar. So it’s going to take some time, but again, we are on a good path to a grid that is completely powered by clean and renewable sources.

Q: What are you working on at UCLA to help develop smart energy solutions?
A: At Smart Grid Energy Research Center, we facilitate collaborations among industry leaders, academia and government policymakers by organizing thought leadership events during which leadership from government agencies such as the California Energy Commission, electric utilities (SCE, PG&E and SDGE) and industry (GE, ABB, Siemens, etc.) discuss ways to collaborate to achieve common goals. Since the center’s launch about a decade ago, we have hosted more than 25 such events.

The center is also a partner in the CalTestBed program — an initiative funded by the California Energy Commission (CEC) that provides $8.8 million in testing vouchers to clean energy innovators to use at one of the more than 60 world-class testing facilities throughout California. We are now working on a second CEC-funded project focused on solar-integration testing.

In addition, UCLA is part of a program that involves multiple UC campuses, other universities, Lawrence Berkeley National Laboratory (LBNL) and Lawrence Livermore National Laboratory (LLNL) to provide a holistic assessment of California’s deep decarbonization pathways and synthesis of key technology and deployment gaps, as well as policies needed for California to meet the 2045 goal of carbon neutrality.

The study will involve multiple sectors — such as transportation, electricity and building — and will consider the cross-sector interdependencies, climate change impact and the emerging environmental justice concerns to fill in the gap of the existing emission-reduction pathways. This interdisciplinary effort will build multi-layer decarbonization pathway scenarios and perform cross-sector simulation evaluations at multiple temporal and spatial scales, based on which the policy implications will be derived to support emission regulations and new structure changes.