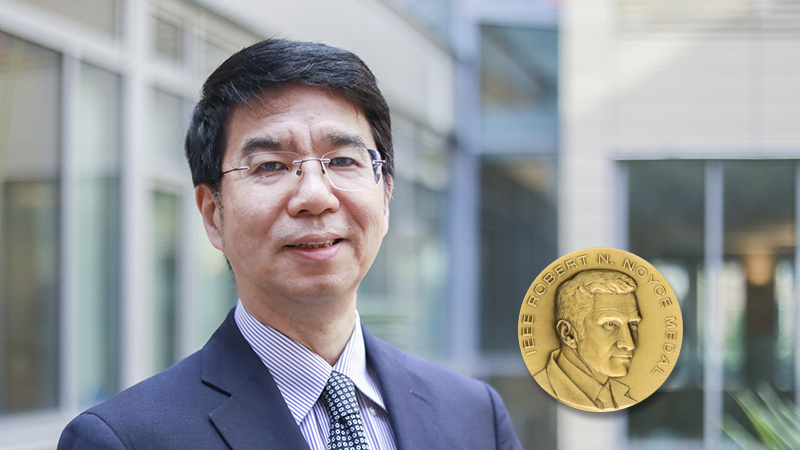 UCLA Samueli Newsroom
Jason (Jingsheng) Cong, UCLA’s Volgenau Professor for Engineering Excellence and a distinguished professor of computer science and of electrical and computer engineering, has received the 2022 Robert N. Noyce Medal from the Institute of Electrical and Electronics Engineers (IEEE), in recognition of his exceptional contributions to the microelectronics industry.

First awarded in 2000, the medal is named after the Silicon Valley giant Robert Noyce who co-invented the integrated circuit and co-founded Fairchild Semiconductor and Intel. IEEE is the world’s largest professional technical society with more than 400,000 members in more than 160 countries. The past winners include illustrious leaders in the microelectronics industry, such as the Taiwan Semiconductor Manufacturing Company founder and former CEO Morris Chang, Intel’s former CEO Craig Barrett and, most recently. Advanced Micro Devices’ CEO Lisa Su.

Cong is the director of the UCLA Center for Domain-Specific Computing and leads the VAST (VLSI Architecture, Synthesis and Technology) Laboratory. At the UCLA Samueli School of Engineering, Cong has supervised more than 40 Ph.D. graduates, many of whom now lead their own research labs at top computer science schools or hold research and development leadership positions in the microelectronics industry.

Among the numerous honors Cong has received for his pioneering contributions to computer science are his election to both the National Academy of Engineering and the National Academy of Inventors. He received the University Research Award for excellence in semiconductor design research from the Semiconductor Industry Association and the Semiconductor Research Corporation in 2019. He is a fellow of the IEEE and the Association for Computing Machinery (ACM). He has received 16 best paper awards, three 10-year retrospective, most influential paper awards and the 2011 ACM/IEEE A. Richard Newton Technical Impact Award in Electric Design Automation. He is the first person to have received technical achievement awards from both the IEEE Circuits and Systems Society and the IEEE Computer Society.

Cong is also a successful entrepreneur, having started several companies spun out of UCLA research on tools to automate and improve the design of microelectronics.