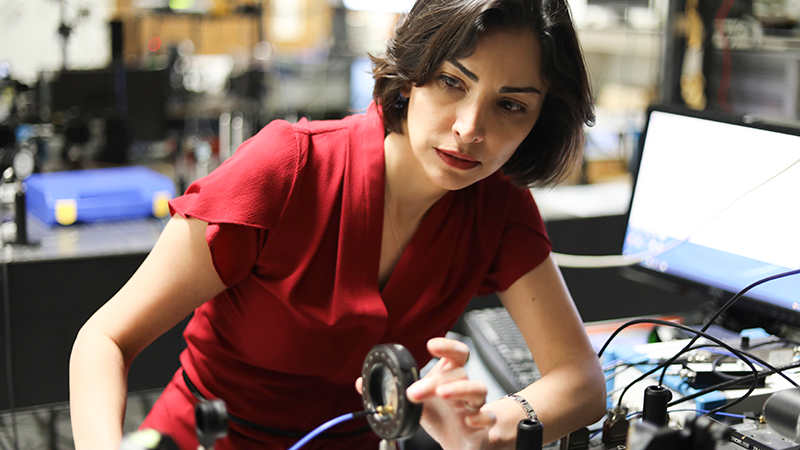 UCLA Samueli Newsroom
Mona Jarrahi, a professor of electrical and computer engineering at the UCLA Samueli School of Engineering, has been awarded the 2021 A F Harvey Engineering Research Prize from the Institution of Engineering and Technology (IET), making her the first faculty from a U.S. public university to receive the global organization’s most valuable prize of £350,000 (approximately US$465,829).

Jarrahi has made groundbreaking contributions to utilizing the untapped potentials of the electromagnetic spectrum in terahertz, millimeter-wave and microwave ranges for a wide variety of ultrafast sensing, imaging, communication and computing applications. Her research optimizes the complementary functions of electronic and photonic devices to introduce a hybrid methodology for designing systems with operation frequencies beyond traditional transistor technologies.

The award will be used to further Jarrahi’s research in developing key building block components of the next-generation terahertz optoelectronic systems so they can be integrated into one platform. Currently, these system components require different manufacturing methods, complex setups and bulky housing in order for them to connect and work properly.

Jarrahi will present her research on March 17, 2022, at a lecture hosted by the IET, followed by a Q&A session moderated by IET President Sir Julian Young. The presentation will be livestreamed on the IET’s YouTube channel and will be available after the lecture.

“The IET’s A F Harvey Engineering Research Prize supports the world’s best scientists and engineers to advance their research,” Young said. “The technological revolution in the terahertz field is highly promising, and we are excited to support the pioneering work of Professor Jarrahi and her team. This research should transform our approach to high-performance, integrated systems that have a wide-range of important applications and will benefit us all.”

Established in 2011, the IET A F Harvey Engineering Research Prize is awarded annually to a researcher in one of three engineering areas on a rotating basis: medical engineering and technology, lasers and optoelectronics, and radar and microwaves, which is this year’s focus. The prize commemorates the late British electronic engineer Arthur Frank Harvey, whose gift to the IET supports research in the aforementioned fields. The U.K.-based organization, with nearly 160,000 members in more than 150 countries, seeks to inspire, inform and influence the global engineering community to engineer a better world.

Jarrahi is the director of the Terahertz Electronics Laboratory and a member of the California NanoSystems Institute. She has received numerous prestigious honors for her work, including an inaugural Moore Inventor Fellowship from the Gordon & Betty Moore Foundation in 2016 and a Presidential Early Career Award for Scientists and Engineers in 2014. She is a frequent collaborator with researchers at UCLA, other institutions and industry.