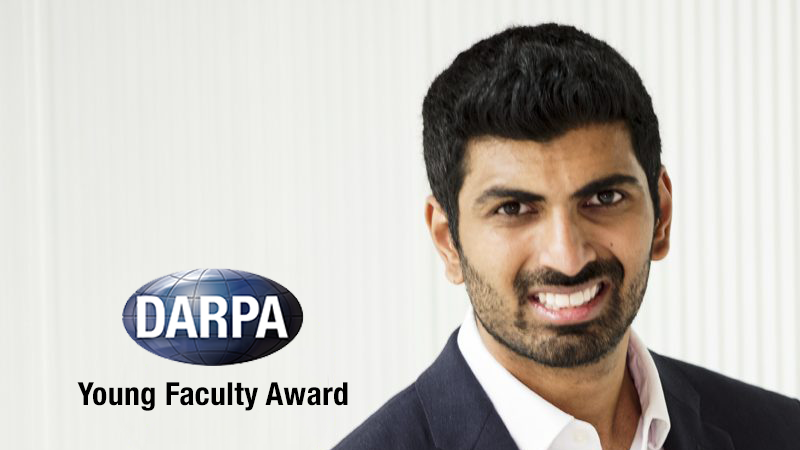 UCLA Samueli Newsroom
Achuta Kadambi, an assistant professor of electrical and computer engineering, has received a 2021 Young Faculty Award from the Defense Advanced Research Projects Agency (DARPA) of the U.S. Department of Defense. This is Kadambi’s third early career award in 2021. He received a CAREER Award from the National Science Foundation in March and an Army Young Investigator Award in May.

The two-year, $500,000 DARPA grant will support the development of a contactless, nearly instantaneous COVID-19 test that has the same accuracy as many chemical tests. The test will use light sensors to detect subtle details on the skin, indicating changes in body chemistry caused by the virus, and audio sensors to detect signs of the disease that modulates a person’s voice. Such a system could be used in hospitals, airports and many other places with high foot-traffic. The test could also be adapted to help diagnose a range of other infectious diseases. The project may receive additional $500,000 in funding following the initial two years of research.

DARPA’s Young Faculty Award program recognizes rising research stars at U.S. academic institutions and provides funding, mentoring and industry contacts to awardees early in their careers so they can develop their research to meet national security needs. The program aims to develop the next generation of scientists and engineers in the research community who will focus a significant portion of their future careers on defense and national security issues.

Kadambi, who co-founded Akasha Imaging, joined the UCLA Samueli School of Engineering faculty in 2018. He leads the Visual Machines Group at UCLA, which develops computational-imaging systems to enhance sight for machines, with a focus on technologies that can see and account for complexity, diversity and nuance. Such technologies could apply to autonomous vehicles, search-and-rescue robots, as well as advanced imaging for medicine and health care. Kadambi’s other recent accolades include his election as a senior member of the National Academy of Inventors in 2020 and being named to Forbes’ “30 Under 30” list in science in 2018. He also recently penned a piece published in Science about issues of equity and fairness in medical devices and ways to address them.