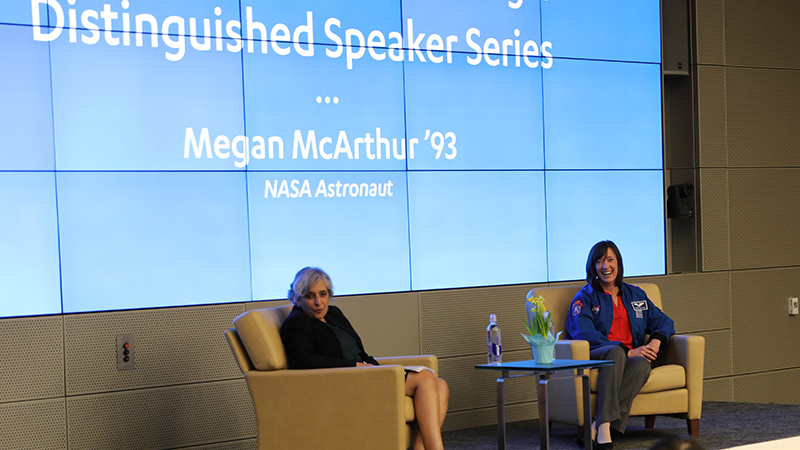 UCLA Samueli
Megan McArthur’s stellar career trajectory has taken her from piloting submarines in a campus pool as an engineering student to piloting the SpaceX Crew-2 mission as a NASA astronaut. She shared her inspiring journey with nearly 300 UCLA Samueli engineering students and alumni on March 30 when she visited her alma mater as the featured speaker in the latest installment of the Ronald and Valerie Sugar Distinguished Speaker Series.

In addition to an in-person audience at the Mong Learning Center in the Engineering VI building, which included several high school students from the Geffen Academy at UCLA, the event was also livestreamed to accommodate alumni and NASA audiences from around the world.

McArthur was in space for 199 days aboard the International Space Station before the crew of four returned to Earth last November.

Astronauts undergo a readjustment process after such a long mission. “Space travel takes a toll”, McArthur said. “Your spine is stretched in the zero-gravity environment and recompresses upon return to Earth; your brain has to adjust to being in a constant state of free fall while experiencing weightlessness.” Such experiences put day-to-day normalcy in perspective. McArthur said she was happy to once again experience the “little things” on Earth.

“Feeling the wind on your face, hearing the birds chirping; it’s incredible how much you miss that,” she said.

The process of training to get to space was also a challenge, McArthur said, especially during the pandemic. She and three other Crew-2 members trained for nine months with limited personnel in specially engineered rooms designed to maintain social distancing while running many emergency training drills. Poor weather conditions along the flight path of the Crew Dragon Endeavour pushed back the original launch by one day, but ultimately, the spacecraft docked at the International Space Station successfully on April 23, 2021.

“Once we took off we all had a hoot; once I saw the commander giggling I knew it was OK to smile and have fun,” McArthur said. She sat in the same seat in this mission that her husband, NASA Astronaut Bob Behnken, used on the previous Demo-2 mission. The Crew-2 mission was the first with astronauts on board that employed a previously used booster launch vehicle.

“You train your brain here at UCLA to solve problems, take in a lot of information and learn quickly,” Megan McArthur said.

McArthur and the crew faced some challenges aboard the Crew Dragon on their way to the ISS on the first night, experiencing a warning class event in which the crew had to prepare for potential collision with debris in orbit flying in their path, which luckily did not make contact. But the course wasn’t clear until after the crew had to put back every single item they took out of their bags and helped one another laboriously get into their space suits as they were just getting comfortable in their pajamas ready for some shuteye.

Originally slated for a six-month stay on the ISS, the descent back to Earth was delayed by the broken lavatory in the capsule and poor weather conditions. But the crew managed to successfully run hundreds of scientific experiments before safely splashdowning off the coast of Florida on Nov. 8. 2021.

When asked how she worked on such a variety of scientific experiments, some of which not within her field of expertise, McArthur mused. “Often the most challenging thing is the sheer volume of different things, which is also the most appealing part, too.” But handling tiny test samples that could easily float away in microgravity presented its own challenges. Fortunately, Velcro came in handy to keep tools and other items secured when not being used. Thanks to internet access, a recent addition to the ISS, she was also able to get real-time help from the mission control with trained specialists talking her through the procedures to make sure everything was done properly.

The Crew-2 mission was McArthur’s first trip to the ISS but second venture into space. In 2009, the then Mission Specialist McArthur was a flight engineer and robotic arm operator of NASA’s final mission to service the Hubble Space Telescope aboard the Space Shuttle Atlantis. Hubble recently captured an image of the most distant star ever seen, a feat announced by NASA on the same day of McArthur’s UCLA appearance, and one in which she is proud to say she played a role.

“Anytime a new discovery is made by Hubble I can say, ‘I did that; you’re welcome,’” she said with a smile.

“There are women at every level of leadership now. I have a seat at the table,” Megan McArthur said.

After recounting her experiences in space, McArthur reflected on her time as an aerospace engineering student at UCLA, where she was a member of the Human Powered Submarine team. She fondly recalled the days and nights spent building the submarine with her teammates, citing the project as a formative experience. After earning her B.S. in aerospace engineering at UCLA in 1993, McArthur went on to obtain a Ph.D. from the Scripps Institution of Oceanography at UC San Diego.

“You train your brain here at UCLA to solve problems, take in a lot of information and learn quickly,” McArthur said. “Those experiences at UCLA changed my life and set me up for my path.”

While at UCLA, McArthur interned at NASA, where she was one of the few women in her entire department. She recalled in the early days, women practically could each take a bathroom for themselves because of how few of them worked at NASA. There is definitely a line now, McArthur joked.

“There are women at every level of leadership now. I have a seat at the table,” McArthur said. So her message to aspiring women engineers was simply, “Go for it — that’s the bottom line.”

When asked by a student what it was like to see Earth from space for the first time, McArthur was visibly moved by memories of the experience.

“I saw lightning over the surface of the Earth. It was mesmerizing. It made me realize that this is a real living system,” McArthur said. “Seeing the atmosphere that’s all that’s keeping us alive down here, … it elicits a protective response. We talk about terraforming Mars, but seeing Earth makes you realize we need to conserve it first.”

At a reception following the event, students lined up to ask more questions, requesting photos to be taken with UCLA’s space-traveling celebrity. “We are so proud that you are a UCLA engineer,” some students exclaimed as they asked McArthur to autograph anything from a cell phone cover to, well, whatever they could find.

The full recording of McArthur’s talk can be found on UCLA Samueli’s YouTube channel.

The Ronald and Valerie Sugar Distinguished Speaker Series was established in 2016 thanks to the generous support of triple Bruin engineer Ronald Sugar ’68, MS ’69, PhD ’71, former CEO and chairman of the board for Northrop Grumman, and his wife Valerie Sugar ’71. The series brings national and international leaders in engineering and related fields to UCLA and is designed to provide engineering students and alumni with the opportunity to hear firsthand from technology leaders and innovators on relevant topics.