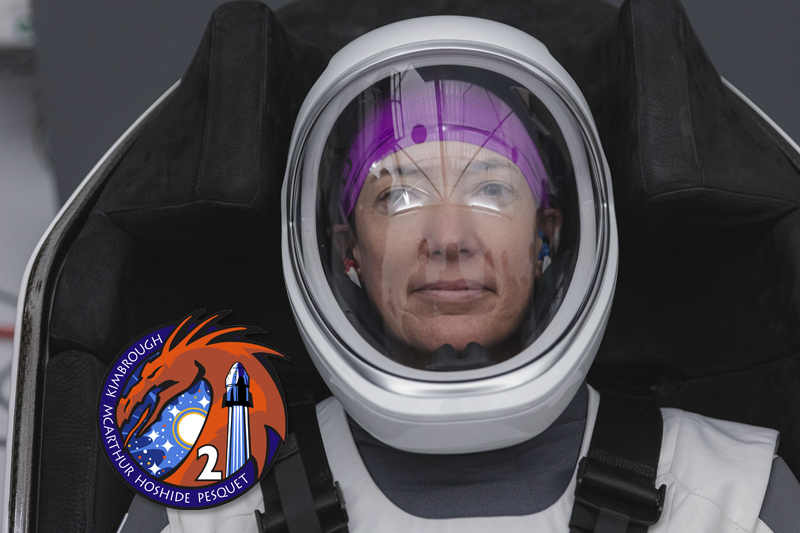 SpaceX
Megan McArthur seated inside a mockup of the SpaceX Crew Dragon vehicle during a training session at the SpaceX training facility in Hawthorne, California

Set to launch on April 22, the six-month mission will allow the crew to conduct hundreds of scientific and medical-technology experiments with the help of teams on the ground. The group will also perform maintenance on the ISS and install new solar arrays to boost the ISS’s total available power.

The four-member, international crew recently got together on March 1 at a pre-launch media briefing, held virtually by NASA at its Johnson Space Center in Houston, Texas. McArthur, who will be second in command as the mission pilot, was joined by spacecraft and mission commander and fellow NASA astronaut Shane Kimbrough, and two mission specialists — Akihiko Hoshide from the Japan Aerospace Exploration Agency and Thomas Pesquet from the European Space Agency.

The spacecraft will lift off from the Kennedy Space Center in Florida and is expected to return to Earth in the fall of 2021. The astronauts will remain aboard the space station as expedition crewmembers, and will join three other members — one NASA and two Russian astronauts — who are scheduled to launch on April 9 in a Soyuz spacecraft from the Baikonur Cosmodrome in Kazakhstan.

The NASA crew discussed preparations underway and their multifaceted training program, getting the astronauts ready to work and live in close quarters on the ISS.

“The thing that makes the training intense is really the volume and variety of the things that we have to cram into our brains before we get ready to launch,” said McArthur, who is responsible for spacecraft systems and performance. “We’re not only learning a brand new vehicle that we are going to launch in, and how to monitor and operate in that vehicle, but we’re also learning all of the things we’ll be expected to do while living aboard the space station. That’s not only caring for the space station, but it’s also conducting a variety of different science experiments.”

This mission will mark McArthur’s first trip to the ISS but her second trip back to space. She was previously selected as an astronaut in 2000, and served as a mission specialist aboard space shuttle Atlantis on her first space mission in 2009. During that flight, she repaired and upgraded the Hubble Space Telescope on its final servicing mission, operating the shuttle’s robotic arm during the course of the 12 days, 21 hours she spent in space.

As the only woman on the SpaceX Crew 2 mission, McArthur is an inspiration to many young women who want to pursue a career in aerospace. “The fact that Megan is our pilot, and she’s awesome, should inspire a lot of girls,” her fellow crewmember Pesquet commented during the hour-long briefing. NASA will upload videos on its YouTube channel for the public to follow the launch and the mission alongside the crew.