Materials scientists at the UCLA Samueli School of Engineering and their colleagues in China have developed an ice-prevention coating inspired by the way Antarctic fish species keep their blood from freezing.

Their study, which is published in Matter, suggests that the new coating could be an inexpensive and versatile solution for preventing critical parts on airplane wings, outdoor pipes and other equipment from freezing over in cold temperatures. It is the first material that prevents ice from forming by acting on three distinct aspects of ice formation.

“Ice formation starts from nucleation, when a small seed crystal of ice first forms, before it grows and then finally adheres to a surface,” said Ximin He, who led the study and is a UCLA assistant professor of materials science and engineering. “While there are anti-ice solutions out there, they’re designed to tackle only one of these three aspects of this complex process, or they only work on certain types of surfaces. This new coating is simple to make and very durable; it is an all-in-one solution to prevent ice formation on many different surfaces, from plastics to metals to ceramics, and under different conditions.”

​The gel is made mostly of water, but its key ingredient is polydimethylsiloxane, a nontoxic, silicone-based polymer used in contact lenses, cosmetics, lubricants and other applications that require some slipperiness. 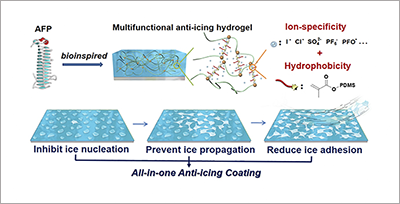 When sprayed onto a surface, it forms a thin, transparent coat that helps prevent freezing in three different ways: lowering the freezing temperature of water on the surface, delaying ice crystals from growing and making it difficult for the ice to stick to the surface.

Water usually freezes when the temperature is around zero Celsius (32 degrees Fahrenheit), although the precise freezing point depends on environmental conditions.

The hydrogel also set a record for the amount of time it delayed ice from forming at a temperature of 25 degrees below zero Celsius (13 degrees below zero Fahrenheit). In the study, materials including plastic, glass, ceramics and metals that were coated with the hydrogel took more than 65 minutes for ice to form at that temperature, more than 40 minutes longer than the previous record, which also was set during the 2016 study.

Even if ice does form on an object’s surface, the hydrogel’s slipperiness makes it easy to remove the ice by simply brushing or blowing it off, with no scraping or heat needed.

In the 1960s, scientists discovered that several species of Antarctic fish make proteins that work as an antifreeze for their bloodstreams. Similar proteins have since been found in insects, microorganisms and plants. The new coating works in part through mimicking the molecular structure of those proteins.

The researchers conducted much of the experiment in a laboratory, although one test was performed outdoors, in Beijing, at below-freezing temperatures.

In addition to Ximin He, other UCLA authors of the study included Zhiyuan He, Mutian Hua, Shuwang Wu and Dong Wu, all members of Ximin He’s research group. The other authors were Chenyang Wu and Jianjun Wang of the Chinese Academy of Sciences in Beijing, and Xinyuan Zhu of Shanghai Jiao Tong University.

This project combined Ximin He’s expertise on hydrogels with anti-icing research from Wang’s lab at the Chinese Academy of Sciences.