From a Love of Math to a Ph.D. in Civil Engineering 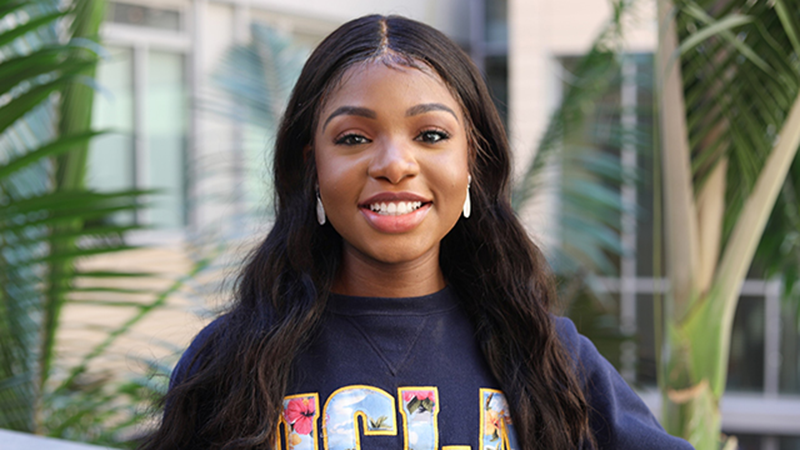 “Growing up, I noticed that after long car travels in Nigeria, I always came back with back pain because the roads were so bad,” says Morolake (Rolake) Omoya, a Ph.D. candidate in civil engineering at the UCLA Samueli School of Engineering.

“After that, I started talking about becoming an engineer and I noticed that there was some type of stigma related to females going into engineering — civil engineering in particular. So I decided that I was going to go to one of the best schools and get the best education possible and earn the most respect for my field.”

Omoya won numerous prizes in math competitions throughout middle school and high school, placing second in a national competition when she was only in 9th grade.

“That was the first time that everyone began to tell me, ‘You’re good at this and you need to make sure that you pursue this to the fullest.’”

“UCLA has taught us that the worst thing we [women and minority engineering students] could do is be quiet. So if you notice something is not right, you have to say something respectfully — whether it’s to be an ally or to stand up for yourself.”

One of her most memorable experiences was attending a two-week intensive program in Uganda devoted to math and applied engineering applications when she was 15. The camp was organized by British African entrepreneur and philanthropist Tom Ilube, who went on to establish the African Science Academy (ASA) in Accra, Ghana, The ASA school provides free STEM-focused education to young women from across Africa.

Omoya visited the school for a week in August 2019 as a mentor (arriving with abundant swag courtesy of UCLA Engineering).

“I really want more black women in engineering,” she said. “The students were so intelligent and for them, it was a moment of seeing, ‘Oh, someone who looks like me in STEM.’”

Becoming a champion of diversity

Omoya arrived at UCLA as a freshman when she was 17. “I had only been out of Nigeria once before — to attend the math camp in Uganda. Everything was different here,” she recounted. The culture shock was profound.

“Plus the first year at UCLA, I was the only undergrad freshman from the continent of Africa — there was me, from Nigeria, and a transfer student from Angola,” she said.

Although a 2021 PEW Research report found that gender, racial and ethnic diversity is increasing in STEM fields in the U.S., it also found that women, Blacks and Hispanics remain significantly underrepresented, especially among students earning undergraduate degrees in (non-computer) engineering fields and in the (non-computer) engineering workforce.

Omoya has benefited greatly from two UCLA Engineering programs specifically designed to increase and sustain diversity and retention in engineering: the Center for Excellence in Engineering and Diversity (CEED) and Women in Engineering (WE@UCLA). She has been an active participant in both and is currently the social media director for WE@UCLA.

Another pillar of support for the talented student has been the UCLA chapter of the National Society of Black Engineers (NSBE), for which Omoya consecutively served as secretary, vice president and president of NSBE at UCLA from 2013 through 2016. She remains an engaged chapter member until today.

“I couldn’t imagine my experience at UCLA without these programs,” related Omoya. “I always say, diversity is not for the person, it’s for the world.”

“UCLA has taught us that the worst thing we [women and minority engineering students] could do is be quiet. So if you notice something is not right, you have to say something respectfully — whether it’s to be an ally or to stand up for yourself,” she said.

Omoya, who has a warm and easygoing personality, said she was initially shy and had to learn to speak up. “I find being an ally is easier, but being an ally many times makes it easier over time to stand up for yourself,” she said.

Today, the doctoral student is offhand about the types of bias she has encountered. Recalling an undergraduate group project, she said it wasn’t until she sat down at a computer and fixed the errors in the MATLAB software code that her male peers recognized her proficiency.

“That was the first time I was confident enough to say, ‘Actually, let me do this, because I really, really know it.’ And that taught me that you have to keep speaking up. It’s exhausting — that’s why having a support group is important, that’s why raising awareness is important.”

Describing a WE@UCLA leadership academy that featured women alumnae of UCLA Engineering who are now executives, Omoya commented, “You realize, we’re all going through this experience — these women who are CEOs and presidents are still going through it.

“It’s not personal; the problem is with the system, not me. When you can get out of that headspace and just commune with amazing women in the field, it becomes less problematic.”

The young engineer values the support and guidance she has received from her many mentors, starting with her parents. At UCLA Engineering, those mentors include Scott Brandenberg, professor of civil and environmental engineering and former associate dean of diversity and inclusion; her dissertation advisor Henry Burton, Englekirk Professor of Structural Engineering and director of the Burton Research Group at the engineering school; and the “awesome” Audrey Pool O’Neal, director of WE@UCLA and adjunct associate professor of mechanical and aerospace engineering.

Love of research leads to Ph.D.

The CEED program placed Omoya in a research lab during her first year of school. “I worked in a construction lab that was investigating cement, sand and other additives to check for strength and tension. Turns out, I was really good at measuring things,” recounted Omoya.

After several quarters there, she transferred to Professor Burton’s lab. By then, she had caught the research bug. “I always enjoyed the research part of school, not just the coursework,” she shared.

Omoya made the decision to earn a doctorate in steps. She liked doing research, so she decided to do a master’s degree.

“I think the Ph.D. revelation came when I realized that I liked the master’s program. And with a Ph.D., you’re making a knowledgeable change in your field that you can give to people — that’s what inspired me.”

Her dissertation, for which she taught herself Python (a programming language used in computer modeling), is focused on structural engineering. Using her considerable skills in math, Omoya revised an existing product to develop a model that uses Bayesian statistical analysis to predict how earthquakes will affect specific buildings and the time required to restore those buildings to their pre-earthquake condition.

Although she’s not yet certain of her long-term path, the young scholar is considering working in the environmental risk management industry for a few years and then perhaps pursuing an academic career.

“It’s been an incredible privilege to have a front-row seat and watch as Rolake finds her voice, follows her passion and makes her mark on our school, the male-dominated field of engineering and those from underrepresented groups aspiring to become engineers/computer scientists. I don’t know what’s next, but I can’t wait to see it!” said her mentor, Professor O’Neal.