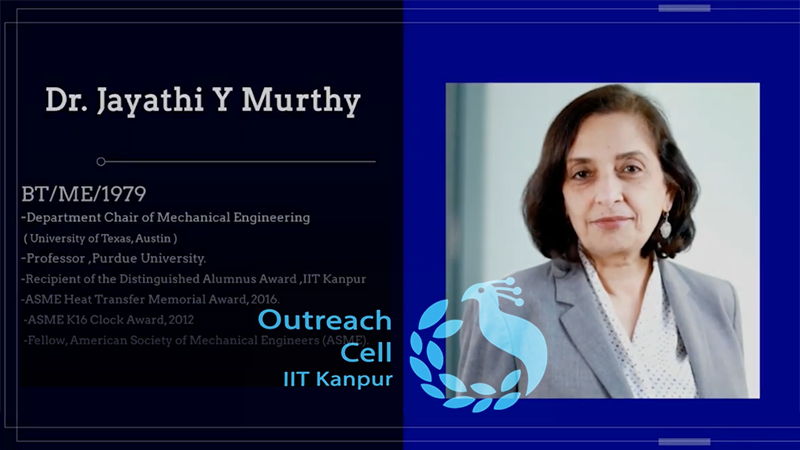 UCLA Samueli Newsroom
When Jayathi Murthy began her undergraduate studies at the Indian Institute of Technology, Kanpur, (IITK) in the 1970s, she was one of only two women in her class of more than 250 students. Now, as the first female dean of the UCLA Samueli School of Engineering, she hopes to continue to improve gender parity and foster an environment that encourages young women to pursue careers in science, technology, engineering and math.

In a recent episode of Destiny of Her Own, a webinar series featuring interviews with some of the institute’s most accomplished alumnae, Murthy detailed the not-always-easy path she’s taken from pursuing her degree to working in both industry and academia.

“Sometimes you were the only woman in class,” Murthy said about her time at IITK. “It meant that in labs and workshops, you wouldn’t have lab partners. People were reluctant to work with you. So those were real disadvantages when it came to academics and trying to find your way.”

“I set up WE@UCLA as a way of recruiting and retaining young women into engineering,” Murthy said.

Although gender balance in STEM fields has since gotten better, Murthy acknowledged there is still room for improvement. When she became Dean of Engineering in 2016, Murthy led the effort to establish Women in Engineering at UCLA (WE@UCLA), a program that supports the full participation of women in engineering.

“I set up WE@UCLA as a way of recruiting and retaining young women into engineering,” Murthy said. “We want them to be successful. And then creating a community that would be supportive of them when they graduated and found jobs or other careers.

“In 2021 fall, we are going to be, if everybody who signed up shows up, above 36% women in the freshman class and that’s a heck of a change, right?” Murthy said. “Even five years ago, that number was something like 23% at UCLA.”

Beyond the classroom and as she entered the workforce, Murthy noticed many challenges facing women working in STEM.

“There are very real losses of women from STEM,” Murthy said. “A chunk of that has to do with support for women and families.”

When women aren’t supported within their workplaces, Murthy continued, it is difficult to maintain a work-life balance, but there are actions both companies and universities can take to address that. 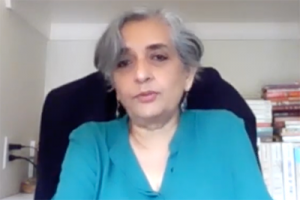 At the university level, for example, schools can ensure female representation within their faculty, showcasing the success of women in STEM fields and placing more women in leadership roles, Murthy said.

“There is a change of culture that has to happen,” Murthy added. “The change won’t happen by itself — we have to make it happen.”

After Murthy graduated from IITK in 1979 with a mechanical engineering degree, she completed her Ph.D. and worked a few years in academia before joining the startup Fluent Inc., a developer and vendor of computational fluid dynamics software with fewer than 10 employees at the time.

Murthy quickly learned how to be a good salesperson for the product she was creating, a lesson she has carried into her career at the university level.

“In academia, of course, you have to be a strong researcher,” Murthy said. “But it also means selling your ideas to get others to know about and fund your work.”

After leaving the private sector, Murthy taught at multiple universities before being named the Ernest Cockrell Jr. Memorial Chair in Engineering at University of Texas at Austin. This position led her to UCLA’s engineering school, where she is now the Ronald and Valerie Sugar Dean of Engineering.

“I want to open up access to engineering to a wide variety of people and to make them successful,” Murthy said.

Now in her sixth year at the helm, Murthy said she wants to recruit students who embody what she has learned are the central qualities of a successful engineer.

“I’m looking to see whether students know the basics,” Murthy said. “But I’m also looking for evidence of creativity and an ability to communicate.”

Murthy said she also hopes to more broadly impact education and research at UCLA, particularly by encouraging both female and other underrepresented students to pursue engineering.

Over the last five years, Murthy has already taken steps toward accomplishing these goals. She has deepened relationships with community colleges surrounding UCLA, increased outreach to underrepresented groups in engineering and eased the transition process for transfer students.

“I want to open up access to engineering to a wide variety of people and to make them successful,” Murthy said. “I also want my faculty to push the boundaries of research and the creation of knowledge. I want students to feel excited about the future of engineering.”