A research team led by UCLA materials scientists has demonstrated ways to make super white paint that reflects as much as 98% of incoming heat from the sun. The advance shows practical pathways for designing paints that, if used on rooftops and other parts of a building, could significantly reduce cooling costs, beyond what standard white ‘cool-roof’ paints can achieve.

The findings, published online in Joule, are a major and practical step towards keeping buildings cooler by passive daytime radiative cooling – a spontaneous process in which a surface reflects sunlight and radiates heat into space, cooling down to potentially sub-ambient temperatures. This can lower indoor temperatures and help cut down on air conditioner use and associated carbon dioxide emissions.

“When you wear a white T-shirt on a hot sunny day, you feel cooler than if you wore one that’s darker in color – that’s because the white shirt reflects more sunlight and it’s the same concept for buildings,” said Aaswath Raman, an assistant professor of materials science and engineering at UCLA Samueli School of Engineering, and the principal investigator on the study. “A roof painted white will be cooler inside than one in a darker shade. But those paints also do something else: they reject heat at infrared wavelengths, which we humans cannot see with our eyes. This could allow buildings to cool down even more by radiative cooling.” 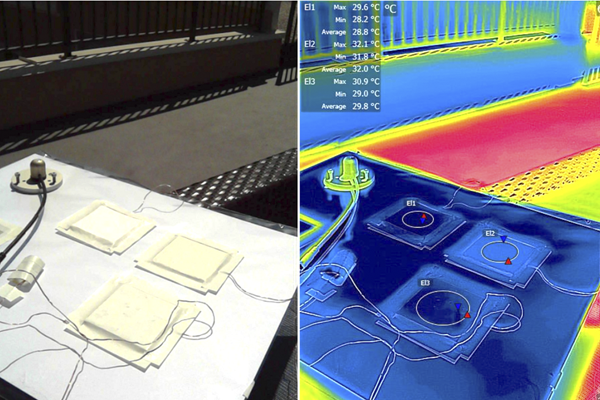 The best performing white paints currently available typically reflect around 85% of incoming solar radiation. The remainder is absorbed by the chemical makeup of the paint. The researchers showed that simple modifications in a paint’s ingredients could offer a significant jump, reflecting as much as 98% of incoming radiation.

Current white paints with high solar reflectance use titanium oxide. While the compound is very reflective of most visible and near-infrared light, it also absorbs ultraviolet and violet light. The compound’s UV absorption qualities make it useful in sunscreen lotions, but they also lead to heating under sunlight – which gets in the way of keeping a building as cool as possible.

The researchers examined replacing titanium oxide with inexpensive and readily available ingredients such as barite, which is an artist’s pigment, and powered polytetrafluoroethylene, better known as Teflon. These ingredients help paints reflect UV light. The team also made further refinements to the paint’s formula, including reducing the concentration of polymer binders, which also absorb heat.

“The potential cooling benefits this can yield may be realized in the near future because the modifications we propose are within the capabilities of the paint and coatings industry,” said UCLA postdoctoral scholar Jyotirmoy Mandal, a Schmidt Science Fellow working in Raman’s research group and the co-corresponding author on the research.

Beyond the advance, the authors suggested several long-term implications for further study, including mapping where such paints could make a difference, studying the effect of pollution on radiative cooling technologies, and on a global scale, if they could make a dent on the earth’s own ability to reflect heat from the sun.

The researchers also noted that many municipalities and governments, including the state of California and New York City, have started to encourage cool-roof technologies for new buildings.

“We hope that the work will spur future initiatives in super-white coatings for not only energy savings in buildings, but also mitigating the heat island effects of cities, and perhaps even showing a practical way that, if applied on a massive, global scale could affect climate change,” said Mandal, who has studied cooling paint technologies for several years. “This would require a collaboration among experts in diverse fields like optics, materials science and meteorology, and experts from the industry and policy sectors.”

The other study authors are Yuan Yang and Nanfung Yu, both associate professors at Columbia University’s Department of Applied Physics and Applied Mathematics.

Mandal is funded by the Schmidt Science Fellowship, in partnership with the Rhodes Trust. Research in the Raman group is supported by the Alfred P. Sloan Foundation.

UCLA has applied for a patent on the technology.