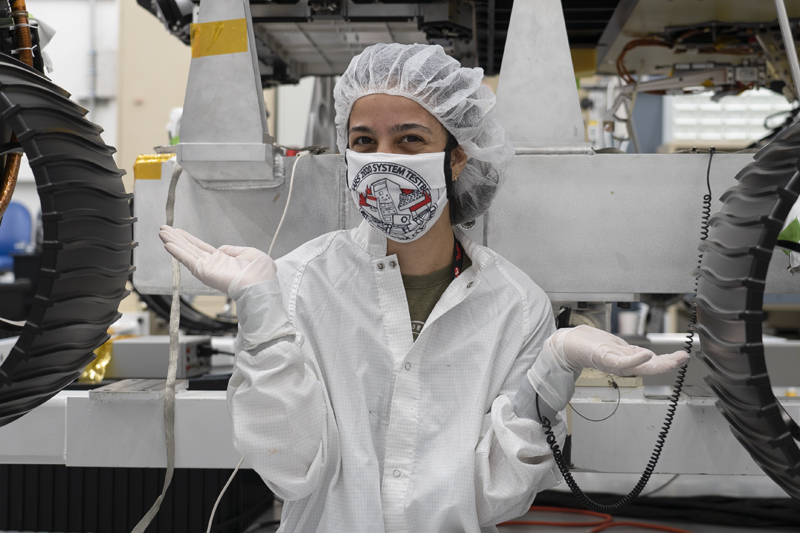 Zarifian is a NASA system testbed engineer at the Jet Propulsion Laboratory and helped test the rover’s mobility systems prior to its launch last July. She worked on everything that has to do with how the rover drives — the actuators that drive and steer the wheels, the sensors on the suspension system, the rover’s computer vision and its autonomous driving behaviors. All of this functionality was tested on Perseverance’s twin rover OPTIMISM, which she helped build in the Mars Yard at JPL.

Recounting the experience watching the rover landing remotely on February 18 with some of her colleagues, Zarifian still can’t contain her excitement. “I don’t think anything prepares you for the reality of landing a 1-ton rover on Mars,” she said. “I was thrilled just hearing the callouts for the telemetry we received. But when we first saw the pictures of the surface, and then these incredible videos of the rover being lowered onto the surface with the sky crane, it just became that much more real. I replay those videos of EDL [entry, descent and landing] all the time and I don’t think I’ve watched them without screaming!”

Nowadays, Zarifian lives and works in Martian time literally as she operates Perseverance on Mars. She is in charge of examining the data from the rover’s inertial measurement unit, which helps NASA know how the rover is oriented and where it is located on Mars. This informs the ground crew that the rover is safe and sound until the next time the team “talks” to it again.

A California native, Zarifian grew up in the San Fernando Valley raised by Armenian parents who both emigrated from Iran and met in Los Angeles. Her mother, in particular, left Iran by herself during the revolution when she was just 20 years old and managed to work her way up, becoming a software engineer after attending an occupational school. Zarifian remembers the time when she would go to work with her mother sometimes, watching her mother debug a code while waiting for it to be dinnertime so they could go home.

“Because of her, it never occurred to me that engineering was not something that women did,” Zarifian explained. “What’s inspiring to me is her courage and bravery in leaving her home and her family to go to a place completely foreign to her, knowing that she had the potential to make a better life for herself.”

As a child, Zarifian said she was always interested in space, and after a field trip to JPL in her senior year at a small Armenian high school in Canoga Park, she decided to pursue an engineering education at UCLA following a visit to the campus. She chose to major in mechanical engineering initially because it allowed her to explore structures, materials, mechanisms, thermodynamics, fluids, etc. Later on, she took an interest in mechanisms and robotics in particular, as mechanical design met electrical and software engineering to create a finished product.

For engineering students needing some career tips, Zarifian offers this advice: “Always work on what you’re passionate about. Join a club or team that’s working on a project, apply for internships and go after every opportunity. Work at those internships and see what you like or don’t like about working in the industry. All of it helps you in deciding what you want to do.”

With the high school fieldtrip still fresh in her mind, Zarifian applied for an internship at JPL working in the Curiosity rover testbed the summer after her second year at UCLA. This experience led her to become part of the team that built UCLA’s first CubeSat, ELFIN — the Electron Losses and Fields Investigation twin satellite for space research.

“As a woman of color, I’m certainly not the first person anyone pictures when they think ‘engineer,’ so that has a lot of effects on me and on others,” Zarifian said.

“Spending long days and nights and weekends working on our CubeSat definitely prepared me for what it would be like working on spacecraft in my career,” Zarifian said. She joined JPL right after graduation from UCLA.

Pursuing a career in a field traditionally dominated by men, Zarifian said that she first noticed the apparent gender disparity during her college years. “As a woman of color, I’m certainly not the first person anyone pictures when they think ‘engineer,’ so that has a lot of effects on me and on others,” she recalled. “Younger women don’t necessarily see themselves working in the aerospace industry since they aren’t as well represented.”

While acknowledging there are barriers facing women in the forms of unconscious bias during the hiring process or even after their entry, Zarifian remains hopeful for the next generation of engineers. “The people I work with have been nothing short of brilliant and our mutual respect for each other is what allows us to build and land rovers on Mars. I really do think it will only get better from here. In the meantime, we persevere,” she said.

Working odd hours, including night shifts and weekends building and testing a rover can be grueling, especially in a challenging year when the world is turned upside down by a global pandemic. Zarifian, who has always thrived on problem-solving, nevertheless sees a silver lining presented by COVID restrictions.

“The pandemic has made the nonstop work hours a little easier since there hasn’t been anything to really miss out on,” Zarifian deadpanned. “The reward is getting to be a part of a mission that explores Mars, going to places nothing’s ever been to before, and inspiring the next generation of scientists and engineers. With the way this past year has gone, I think we all needed a win. Landing on Mars just happened to be the win I needed!”