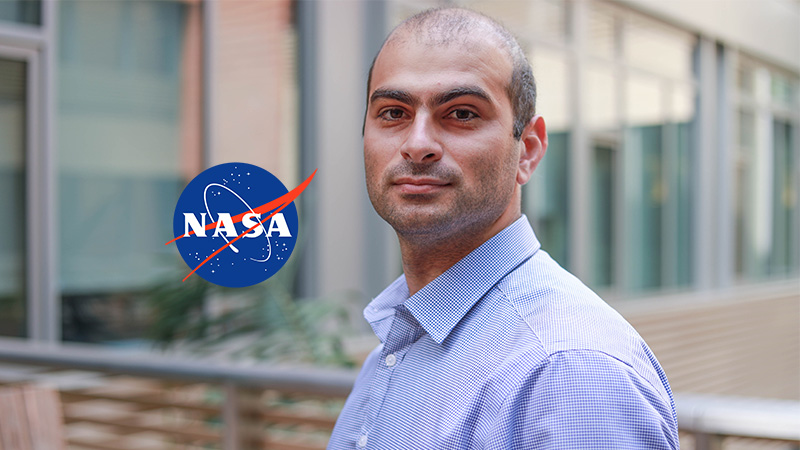 Artur Davoyan, an assistant professor of mechanical and aerospace engineering at the UCLA Samueli School of Engineering, has received an Early Career Faculty Award from the National Aeronautics and Space Administration (NASA). The award, one of seven selected for 2022, includes a three-year, $600,000 grant to support Davoyan’s ongoing research into solar sail technologies for spacecraft propulsion and maneuvering.

Solar sails work much the same way as sailboats. Instead of being powered by wind, however, solar sails are propelled by the light of the sun itself. The technology offers unprecedented capabilities for space exploration at extraordinary speeds — from orbiting solar probes to spacecraft that can get to the outer solar system, even beyond the interstellar medium to reach other star systems. Such sails could cut the transit time to the outer planets from several years down to a few months.

However, the current class of solar sails are limited in their maneuverability, especially for lighter and larger sails that may be required for future voyages. Davoyan has been working on developing advanced materials with unique capabilities that could be integrated into the sail. Such materials, known as metamaterials, could adjust their orientation to the sun independent of a sail anchored in place on the spacecraft. This would allow for precision control of a spacecraft’s direction, movement and momentum transfer — even with lighter and larger sails.

At UCLA, Davoyan heads the Advanced Space Systems Laboratory exploring how light and materials interact at the nanoscale, with a focus on spacecraft propulsion, energy harvesting and communications. He leads NASA’s Extreme Solar Sailing mission study, with a goal of enabling fast-transit interstellar probe missions. In addition to being an active contributor to NASA’s Solar Gravity Lens Concept, Davoyan is also involved in Breakthrough Starshot — part of the Breakthrough Initiatives that aims to send a light-propelled probe to the Alpha Centauri star system 4.37 light-years away. Prior to joining the UCLA faculty in 2018, Davoyan held postdoctoral fellowships at Caltech and the University of Pennsylvania.