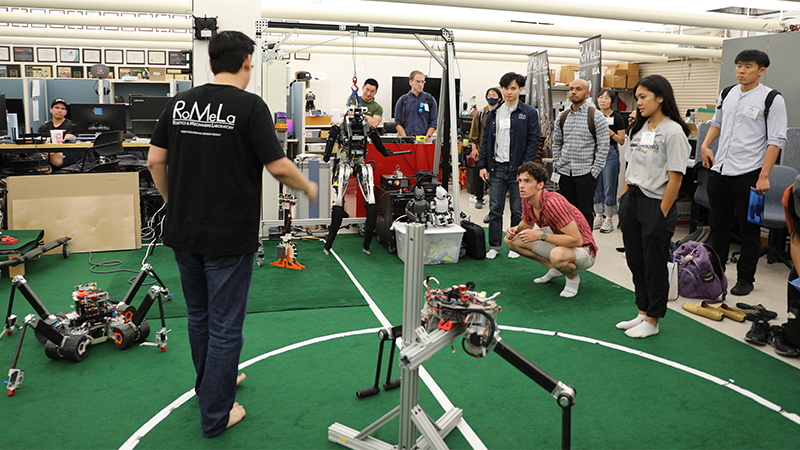 For the first time, UCLA played host to the annual Southern California Robotics Symposium, which made its triumphant return after a two-year hiatus. The sold-out day-and-a-half event attracted nearly 250 robotics researchers and entrepreneurs from various corporations and 11 universities. From microrobots and surgical robots, to origami robots, to legged robots and powered prothesis walking, researchers from across the region showcased a wide spectrum of robotics capabilities at the conference.

Previously held at USC, Caltech and UC San Diego, the symposium was originally slated to take place at UCLA in 2020 but was postponed until September due to COVID. The theme of this year’s conference was “real solutions to real problems impacting real people” and attendees were dazzled by robotics demonstrations, workshops, poster contests and networking opportunities.

“After the isolation of the pandemic, the community was antsy to reestablish human connections,” said Ankur Mehta, a UCLA assistant professor of electrical and computer engineering and the lead faculty advisor for the conference organizing committee. “The event thus held more importance, especially for the new members of the community over the past three years.”

The symposium kicked off Sept. 22 with an industry demonstration and networking session in the afternoon at the UCLA Samueli School of Engineering, featuring representatives from some of the conference sponsors Amazon Robotics, AWS Open Source, FTX, XPRIZE, Disney Research, Hello Robot, Horizon Surgical, UCLA Samueli and Relativity Space.

“We intentionally emphasized early-stage career academics in our programming because these grad students, postdocs and new faculty will soon become the future of robotics,” Alexis Block said.

The second day of the symposium opened at the UCLA Meyer and Renee Luskin Conference Center, with remarks from UCLA Samueli Interim Dean Bruce Dunn. In addition to welcoming guests from across Southern California, he also noted that the school is currently renovating a 10,000-square-foot space in Boelter Hall to house several of the school’s robotics research groups. The collaborative space, projected to be completed in 2024, will also be made available to researchers from across UCLA and the larger robotics community.

One by one, student and faculty researchers took the opportunity to present their projects and learn from other roboticists at the conference. Graduate and postdoctoral scholars as well as assistant professors from UCLA, Caltech, USC, UC San Diego, UC Irvine and UC Riverside hosted presentations throughout the day. Researchers and students, including a few from local high schools, also took turns in a poster “blitz” talk in which each participant had 45 seconds to share their research highlights, followed by a poster session that allowed more in-depth discussions between conference attendees and poster presenters.

“We intentionally emphasized early-stage career academics in our programming because these grad students, postdocs and new faculty will soon become the future of robotics,” said Block, whose HuggieBot and other robotics research led to her earning an Otto Hahn Medal from the Max Planck Society. “This shift in focus made the entire conference environment more welcoming to newcomers and made it comfortable to meet new people.”

The conference concluded with an award ceremony honoring the attendees’ choices for new faculty talk, rising star talk and poster presenters, as well as a dinner to celebrate new-found connections and future opportunities in everything robotics.

Dannela Lagrimas and Riley de Jong contributed to this story.