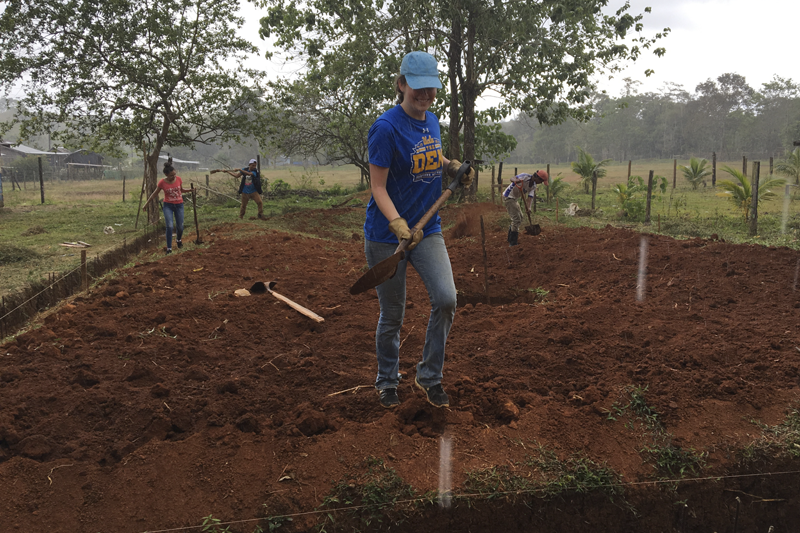 COVID-19 has forced much of student life online, but this has not deterred UCLA’s chapter of Engineers Without Borders (EWB) from making progress on their community development initiatives, both within the U.S. and across the globe.

Founded in 2006, EWB-UCLA focuses on projects that enable club members to apply their engineering skills to improving the quality of life for the communities they serve. The organization is currently working on two projects.

In Nicaragua, a 15-member team led by third-year civil engineering student Anabella Noguera is designing and building a schoolhouse in San Sebastián, a town about an hour’s drive south of the capital city of Managua.

The current schoolhouse in San Sebastián does not have enough space to hold more than one class at a time, making it difficult to educate all of the students simultaneously. The building also has structural issues that cause frequent water leakage. The EWB-UCLA team is adding an additional classroom to the existing schoolhouse and reconstructing the building to solve leakage problems.

In Arizona, 30 EWB-UCLA members led by civil and environmental engineering students Anna Philipp, a fourth-year, and Richard Trujeque, in his third year, will be installing a 300-gallon, solar-powered water tank for a community in the Navajo Nation.

The project includes three technical groups focused on civil design, power and computer-aided modeling respectively. The groups work together to ensure that the solar panel will be powerful enough to run the pump effectively and to create designs of the entire water system using computer software design programs.

Like most student organizations, EWB-UCLA transitioned online after the pandemic broke out last spring. While this change slowed some aspects of EWB-UCLA’s mission, it hasn’t prevented members of the club from accomplishing many of their objectives.

“While this year has been different for us, we have found ways to continue working on our projects,” said EWB-UCLA president Trevor Huffaker, a fourth-year mechanical engineering student.

The teams learned to adapt to remote operations. For example, the Nicaragua project shifted from EWB-UCLA members working on site to hiring a local contractor to carry out the construction.

“We have fundraised for, and designed, a structure that can offer the San Sebastián community a better place to receive education,” Noguera said. Her team used crowdfunding websites to raise more than $30,000 for the venture.

The project suffered a setback last November when hurricanes flooded the construction site. EWB-UCLA members have been working with Los Angeles-based geotechnical engineers to resolve issues from the damage. Construction is on track to resume this month and is projected for a year-end completion, Noguera said.

The Arizona project is currently in the planning stages, with club members doing most of the design and development work on computers. According to Trujeque, while students are gaining less hands-on engineering experience than they would have at the project site, they are instead learning software design programs such as EPANET, AutoCAD and SolidWorks.

Due to past uranium mining, contamination rendered the community’s groundwater unusable. Installing a solar-powered tank would provide both clean water and a source of electricity, Trujeque said. The project is financed by grants from UCLA’s SPARK crowdfunding platform and The Green Initiative Fund.

In addition to their current project, Trujeque and Philipp also have implemented virtual learning workshops, such as building a solar-powered phone charger, to keep members engaged.

EWB-UCLA is also preparing for its next initiative in South America to address structural and water concerns. Led by third-year civil engineering student Logan McDevitt and consisting of 15 EWB members, the long-term project will lay a strong foundation for future club members to continue the humanitarian effort.

What hasn’t dwindled as a result of remote learning is EWB-UCLA’s passion for developing its members’ engineering skills and community-based humanitarian mindset.

“More than anything, I want to see my members grow and learn from their experiences,” Noguera said. “I certainly have, and I want to pass it on.”

EWB-UCLA has previously completed two projects — one in Thailand where they constructed a schoolhouse and another in Guatemala where they built a rainwater catchment system. Learn more about the projects here.