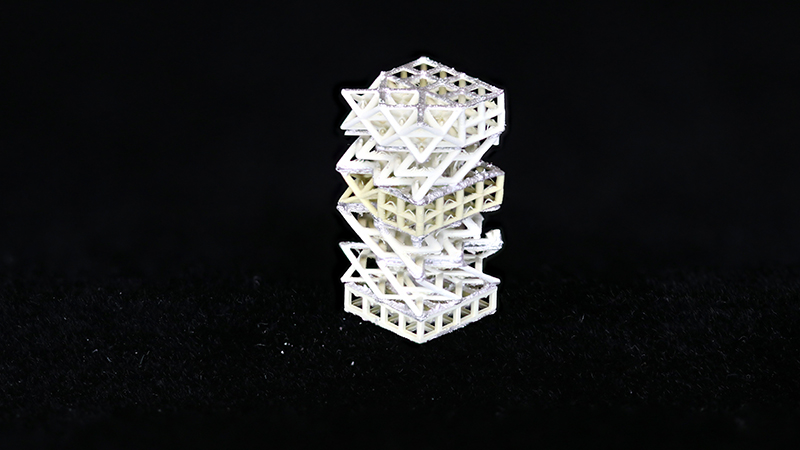 Rayne Research Group/UCLA
A  3D-printed “meta-bot” developed by UCLA engineers is capable of propulsion, movement, sensing and decision-making. It is manufactured all at once by a new type of 3D printing process for engineered active materials with multiple functions (also known as metamaterials).

A team of UCLA engineers and their colleagues have developed a new design strategy and 3D printing technique to build robots in one single step.

A study that outlined the advance, along with the construction and demonstration of an assortment of tiny robots that walk, maneuver and jump, was published in Science today.

The breakthrough enabled the entire mechanical and electronic systems needed to operate a robot to be manufactured all at once by a new type of 3D printing process for engineered active materials with multiple functions (also known as metamaterials). Once 3D printed, a “meta-bot” will be capable of propulsion, movement, sensing and decision-making.

“We envision that this design and printing methodology of smart robotic materials will help realize a class of autonomous materials that could replace the current complex assembly process for making a robot,” said Xiaoyu (Rayne) Zheng.

“We envision that this design and printing methodology of smart robotic materials will help realize a class of autonomous materials that could replace the current complex assembly process for making a robot,” said the study’s principal investigator Xiaoyu (Rayne) Zheng, an associate professor of civil and environmental engineering, and of mechanical and aerospace engineering at the UCLA Samueli School of Engineering. “With complex motions, multiple modes of sensing and programmable decision-making abilities all tightly integrated, it’s similar to a biological system with the nerves, bones and tendons working in tandem to execute controlled motions.”

The team demonstrated the integration with an on-board battery and controller for the fully autonomous operation of the 3D printed robots — each at the size of a finger nail. According to Zheng, who is also a member of the California NanoSystems Institute at UCLA, the methodology could lead to new designs for biomedical robots, such as self-steering endoscopes or tiny swimming robots, which can emit ultrasounds and navigate themselves near blood vessels to deliver drug doses at specific target sites inside the body.

These “meta-bots” can also explore hazardous environments. In a collapsed building, for example, a swarm of such tiny robots armed with integrated sensing parts could quickly access confined spaces, assess threat levels and help rescue efforts by finding people trapped in the rubble.

Most robots, no matter their size, are typically built in a series of complex manufacturing steps that integrate the limbs, electronic and active components. The process results in heavier weights, bulkier volumes and reduced force output compared to robots that could be built using this new method.

The key in the UCLA-led, all-in-one method is the design and printing of piezoelectric metamaterials — a class of intricate lattice materials that can change shape and move in response to an electric field or create electrical charge as a result of physical forces.

The use of active materials that can translate electricity to motions is not new. However, these materials generally have limits in their range of motion and distance of travel. They also need to be connected to gearbox-like transmission systems in order to achieve desired motions.

By contrast, the UCLA-developed robotic materials — each the size of a penny — are composed of intricate piezoelectric and structural elements that are designed to bend, flex, twist, rotate, expand or contract at high speeds.

The team also presented a methodology to design these robotic materials so users could make their own models and print the materials into a robot directly.

“This allows actuating elements to be arranged precisely throughout the robot for fast, complex and extended movements on various types of terrain,” said the study’s lead author Huachen Cui.

“This allows actuating elements to be arranged precisely throughout the robot for fast, complex and extended movements on various types of terrain,” said the study’s lead author Huachen Cui, a UCLA postdoctoral scholar in Zheng’s Additive Manufacturing and Metamaterials Laboratory. “With the two-way piezoelectric effect, the robotic materials can also self-sense their contortions, detect obstacles via echoes and ultrasound emissions, as well as respond to external stimuli through a feedback control loop that determines how the robots move, how fast they move and toward which target they move.”

Using the technique, the team built and demonstrated three “meta-bots” with different capabilities. One robot can navigate around S-shaped corners and randomly placed obstacles, another can escape in response to a contact impact, while the third robot could walk over rough terrain and even make small jumps.

The research was supported by a Young Faculty Award and a Director’s Fellowship Award from the U.S. Defense Advanced Research Projects Agency (DARPA), with additional funding from the U.S. Office of Naval Research, the Air Force Office of Scientific Research and the National Science Foundation.

The advance incorporates 3D printing techniques previously developed by Zheng and Hensleigh while both were researchers at Virginia Tech, which holds the patent. The researchers plan to file an additional patent through the UCLA Technology Development Group for the new methodology developed at UCLA.