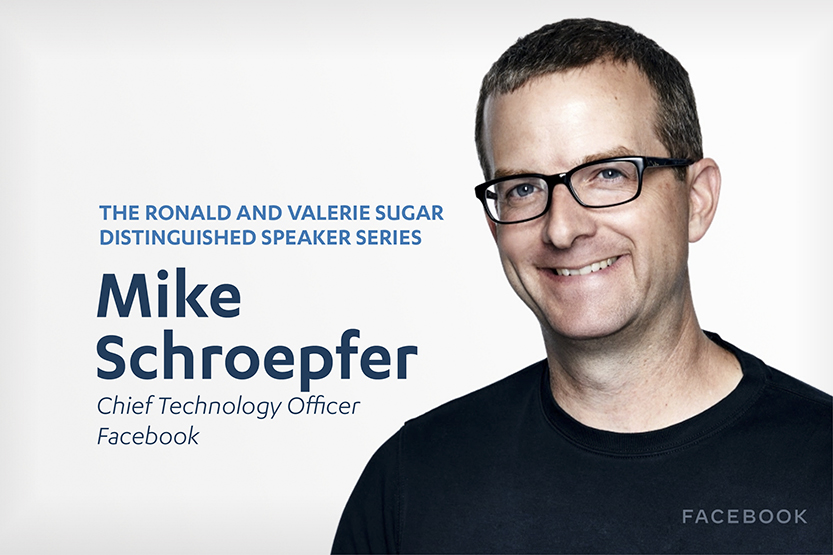 For many UCLA students, their first interaction with Facebook might have been their parents sharing their baby pictures or elementary school photos with friends and family, perhaps much to their dismay. Founded less than 20 years ago, Facebook has become the center of our interconnected social galaxy, helping many stay in touch with friends in different parts of the world.

From a student project started at the dorms that evolved into a global tech giant, Facebook has undergone a myriad of transformation. And no one knows all the technologies involved at Facebook better than the UCLA Samueli School of Engineering’s latest guest speaker — Mike Schroepfer, Facebook’s Chief Technology Officer (CTO).

Harold Monbouquette, associate dean for research and physical resources at UCLA Samueli, introduced Schroepfer over a Zoom webinar on March 3 at the school’s Ronald and Valerie Sugar Distinguished Speaker Series, which has brought together national and international leaders in technology and communication fields since 2016.

Speaking to a record-breaking audience of more than 600 students, faculty and alumni tuning in from 17 different countries, Schroepfer touched on a variety of topics including a career in tech, life at Facebook, evolution of artificial intelligence (AI) and the impact of technology on society. The one-hour event was moderated by Prof. John Villasenor, director of the UCLA Institute for Technology, Law and Policy.

Schroepfer said he didn’t know as a child what he wanted to be when he grew up but he has always liked science, technology and math, and had a fascination with what the future would be like. He holds a bachelor’s and master’s degree in computer science from Stanford University and began his career working at digital-effects startups that developed software used in major motion pictures. He then led product development for the Firefox browser as vice president of engineering at Mozilla and served as a distinguished engineer at Sun Microsystems, which acquired a company he founded, CenterRun, in 2003.

Since joining Facebook in 2008, Schroepfer has led the development of technology that connects billions of people around the world and advances the state of the art in fields like artificial intelligence and virtual reality. When he first joined the company, there were less than 100 million users compared to the billions on the social networking site today. Still, Schroepfer saw massive potential for growth — a quality he advised students to seek out in career opportunities. “Look for opportunities with tremendous possibility and growth and look for colleagues and coworkers who will challenge and inspire you,” Schroepfer said. “So much of your growth will come from the peers that you work with rather than the specifics of what you do.”

Looking back on his tenure at Facebook, Schroepfer broke down the company’s developmental journey into four eras. Back in its early stages, the company focused mostly on scaling its services to keep up with its massive user growth and keeping the site running. When the technology world shifted to mobile use almost overnight with the release of the iPhone, the programming paradigm completely changed as the business model and technology shifted all at once. Once the company caught up, Schroepfer and his team began looking to the future and in 2013 launched its AI Group, employing groundbreaking technology such as augmented reality. Most recently, widespread misinformation in online spaces has prompted Facebook to grapple with the challenges of navigating the platform’s societal impact, managing abusive content and bad actors on a large scale and making sure that their products are bending society toward good and not bad.

According to Schroepfer, one of the ways Facebook has been ramping up cybersecurity is through developing its AI systems. First, its internal teams crafted the platform’s content policies. Then, its software engineers developed AI systems that can find banned content. As of 2021, Facebook’s AI systems can detect with up to 97% accuracy whether or not a post is considered hate speech. The challenge with policy-making, Schroepfer noted, is that content in social context is constantly changing. For example, a year ago, COVID-19 and its associated hate-speech language did not exist. In response, he said that Facebook has invested massively on every aspect of the stack — from foreign security experts, data analysts to software engineers and the like — in order to protect its 2.8 billion users.

Looking toward the future, Schroepfer said that the 2020s will be “the most exciting decade ever in humanity.”

Villasenor, who also teaches electrical engineering, law, public policy and management at UCLA, asked about the future of technology. Schroepfer responded without hesitation, saying that the two fields in which students will see the most dramatic change during the first 10 years of their careers are AI and virtual reality (VR).

Like students across the country, Schroepfer said he is all too familiar with virtual conferencing (VC) fatigue, or Zoom fatigue, resulting from users spending their time staring at a rectangle screen with no 3D information or spatialized audio.

“What VR has to do in the next decade is to break down all those fundamental limitations,” Schroepfer explained. “If someone on my left speaks and someone on my right speaks, I can look at one and they’ll know to go first.” He also predicted that it will be a “whole lot more common to effectively teleport in [a meeting] via a VR system than it will be to get on an airplane or use a VC system” within just the next decade of technology development. Though in-person interactions will remain the gold standard of communication, Schroepfer said he believes the VR experience has the potential to replicate at least 90-95% of it, rather than the 30-50% that VC offers today.

So what should students do if they want to pursue a career in tech? Schroepfer encouraged students first to see limitations as opportunities for change and development, a mindset that his own team at Facebook upholds as they push the boundaries of modern technology development. Because technology changes so quickly, he said that learning and refining the fundamentals are important.

“Abstraction, caching, good API (application programming interfaces) design — these all transcend language,” Schroepfer said. “Never get tired of learning and never let your ego get in the way because there’s always something to learn from everyone.”

Schroepfer cautioned students not to choose opportunities for “extrinsic, worldly purposes” simply because “others think it’s cool or a prestigious brand — it gets old quick.” Instead, he recommended working on things that are intrinsically rewarding, “things that you truly care about.” For him personally, it’s “getting technology advanced and out into people’s hands.”

The full webinar recording can be accessed on the school’s YouTube channel.