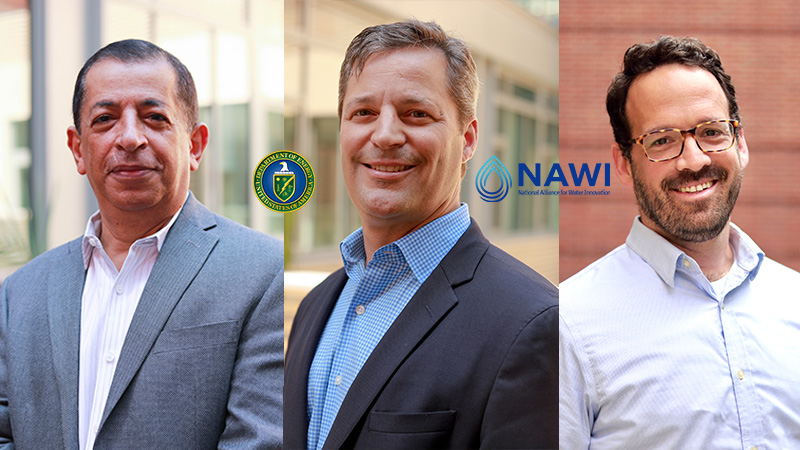 Three UCLA Samueli School of Engineering professors — Yoram Cohen, Eric Hoek and David Jassby — have each received major funding support from the National Alliance for Water Innovation (NAWI) to research energy-efficient and cost-competitive water treatment technologies. Established in 2017, NAWI is a research consortium partnered with the U.S. Department of Energy to create the Energy-Water Desalination Hub designed to address water security issues in the U.S.

Cohen, Hoek and Jassby are also faculty members of the California NanoSystems Institute and Institute of the Environment and Sustainability at UCLA. Each of the three NAWI-funded research projects is highlighted below.

Yoram Cohen, a distinguished professor of chemical and biomolecular engineering and chair of UCLA Samueli’s Faculty Executive Committee, is working with researchers at Lawrence Berkeley National Laboratory and Cal State University, San Bernardino, to develop autonomous, self-adaptive distributed water treatment and desalination systems that are guided by advanced machine learning/artificial intelligence for system control, management and decision support. Cohen and colleagues have already built and demonstrated first-generation working prototypes of such systems for the purification of local water supplies for disadvantaged communities in the Salinas Valley.

The NAWI grant of $2.2 million over three years will support research on using machine learning to optimize autonomous systems, including refining how they adapt to dynamic scenarios, such as changes in water supply and demand, as well as water quality. The researchers will also analyze cost savings in energy consumption, supplies and labor associated with such systems versus costs for current operations.

Eric Hoek, a professor of civil and environmental engineering at UCLA Samueli, and his colleagues will be exploring ways to design reverse osmosis (RO) membranes that are feasible and durable to treat wastewater produced from industrial processes. Such wastewater is extremely high in salinity, with salt concentrations of more than 200,000 milligrams per liter. Seawater, by comparison, averages around 35,000 mg/l for total dissolved solids.

The pressures currently required to treat high-salinity brines are too harsh for existing RO membranes to withstand — they can crush and deform the membranes, causing pinhole-sized defects. The three-year, $3.3 million NAWI grant will help fund research focused on developing a new class of RO membranes that can withstand the required high pressures, cutting down both the energy consumption and the costs of recovering water from high-salinity brines by up to 50%. The UCLA team will collaborate with colleagues in the National Renewable Energy Lab in Golden, Colorado; the University of Connecticut; the University of Wisconsin; and Yale University.

David Jassby, an associate professor of civil and environmental engineering, will work on a modular pretreatment system to remove multiple water contaminants — including organic matter, dissolved minerals like calcium and silicates, and small neutrally charged contaminants — from brackish waters bound for desalination treatment. Brackish water — which has more salinity than freshwater but less than seawater — occurs naturally in the environment and is also a result of certain industrial activities, such as cooling.

The alliance will provide a three-year, $2 million grant for a pretreatment process that will increase the volume of water recovered through membrane-based desalination of brackish water by making the feed stream softer and silicate-free. The process could also improve the water quality of the desalinated stream by eliminating contaminants that permeate through the desalination membranes.

The modular system integrates two methods for separating out and removing contaminants — an electricity-driven coagulation process that targets water hardness, silicates and boron, and a series of membranes to filter out contaminants. This will remove the need for chemical additives used in other types of pretreatment systems and can reduce both treatment time as well as greenhouse gas emissions during treatment. The system will be fitted with sensors to adjust for differences in the feed stream such as groundwater, municipal wastewater, or water used in industrial cooling systems.

Collaborators on the grant include Georgia Tech and WaterTectonics — a water technologies company based in Everett, Washington.

The UCLA Samueli projects were three of 16 total projects selected to receive a portion of $17.7 million in funding from the NAWI and DOE to encourage the development of energy-efficient water-treatment technologies.