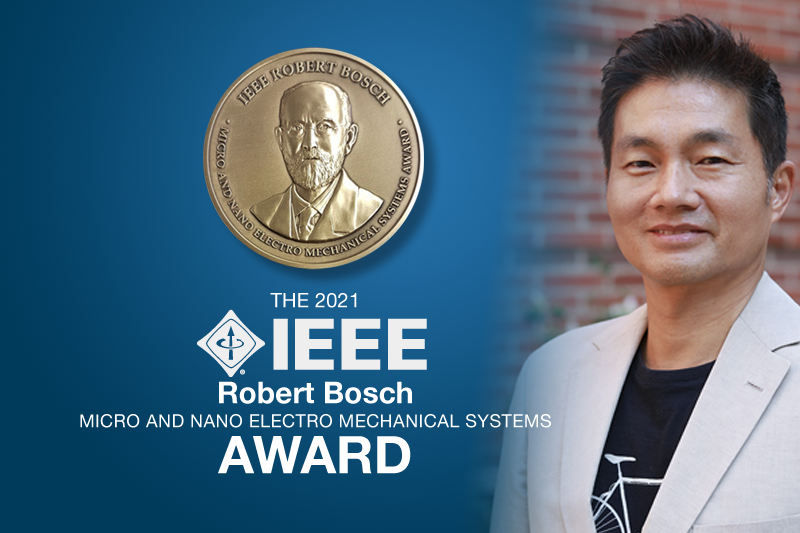 Chang-Jin “CJ” Kim, the Volgenau Professor of Engineering at the UCLA Samueli School of Engineering, has received the 2021 Robert Bosch Micro and Nano Electro Mechanical Systems Award from the Institute of Electrical and Electronics Engineers Electron Device Society (IEEE EDS).

The Bosch Award recognizes individuals who have made advances in the invention, design and/or fabrication of micro- or nano-electromechanical systems and/or devices. The award is considered the highest honor in the field, generally known as MEMS.

Kim, who is a distinguished professor in mechanical and aerospace engineering and the department’s vice chair for academic personnel, was selected for his “pioneering surface-tension-based microelectromechanical systems (MEMS) that led to electrowetting digital microfluidics and superhydrophobic drag reduction.” The technology involves the physical manipulation of microscopic fluid droplets on surfaces using only electric voltages. Applications for this emerging technology include liquid-based camera lenses, compact biochemical analyzers, and drag-reducing surfaces for boats.

The award was presented to Kim last week at the opening of the 2021 International Conference on Micro Electro Mechanical Systems, held virtually Jan. 25-29.

Kim, who also holds a UCLA faculty appointment in bioengineering, received his bachelor’s degree from Seoul National University and a doctorate from UC Berkeley. He joined the UCLA faculty in 1993 and now leads the Micro Nano Manufacturing Laboratory. A fellow of the American Society of Mechanical Engineers, the Institute of Electrical and Electronics Engineers, and the American Institute for Medical and Biological Engineering, Kim is also the recipient of the 2015 Ho-Am Prize in Engineering, South Korea’s highest prize for engineering. In 2017, Kim was named the inaugural holder of the Volgenau Chair in Engineering at UCLA Samueli in recognition of his excellence in research, teaching and mentorship.