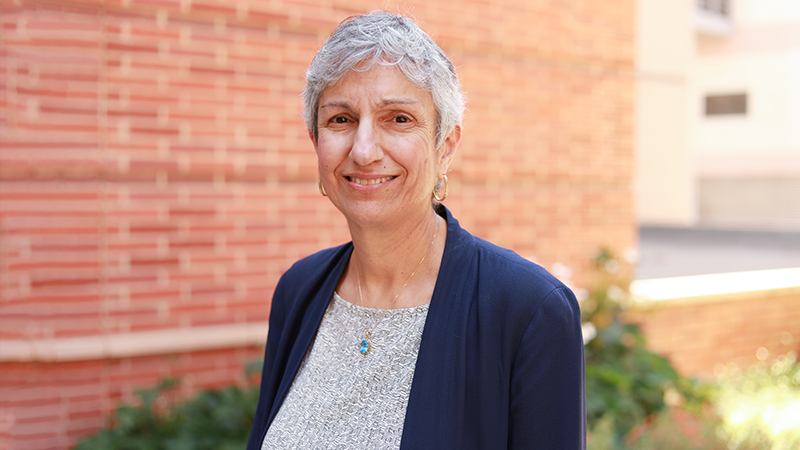 UCLA Samueli School of Engineering has named Ann Karagozian, a distinguished professor of mechanical and aerospace engineering and the director of the Collaborative Center for Aerospace Sciences, the Collins Aerospace Term Chair for Innovation, effective retroactively July 1.

Karagozian ’78 was selected to hold the chair for her contributions to improving the performance of advanced high-speed air-breathing and rocket-propulsion systems.

A UCLA faculty member since 1982, Karagozian conducts research on fluid mechanics and combustion designed to improve engine efficiency and reduce emissions for advanced high-speed air-breathing and rocket-propulsion systems, with applications for alternative fuels. She also leads the Collaborative Center for Aerospace Sciences, operated jointly by UCLA and the U.S. Air Force Research Laboratory at Edwards Air Force Base. Established in 2015, the multidisciplinary center focuses on fundamental and applied research to advance U.S. capabilities in aerospace systems.

Over a span of four decades, Karagozian has held several leadership roles at UCLA, including being elected chair of the Academic Senate in 2010 and serving as interim vice chancellor for research from 2016 to 2017, overseeing the campus’s more than $1 billion research portfolio.  Since 2020, she has served as the inaugural director of the UCLA Promise Armenian Institute — a hub established with a gift of more than $20 million for world-class scholarly work in Armenian studies and for coordinating campuswide interdisciplinary research and public impact with the Republic of Armenia and the Armenian Diaspora.

Karagozian received her bachelor’s degree in engineering from UCLA and her Ph.D. in mechanical engineering from Caltech. She has received numerous awards for her research, teaching and service, including being elected a member of the National Academy of Engineering. She is also a fellow of the American Physical Society, the American Institute of Aeronautics and Astronautics and the American Society of Mechanical Engineers. She has received the Air Force Decoration for Exceptional Civilian Service in 2001 and again in 2010, and currently serves as a member of the Defense Science Board.

At UCLA, Karagozian has been recognized with the UCLA Mechanical and Aerospace Department Award for Outstanding Teaching, the TRW-UCLA Excellence in Teaching Award, the UCLA Samueli University Service Award and the UCLA Faculty–Staff Partnership Award.