UCLA Engineering Alumna Inspires Others through Work at NASA JPL 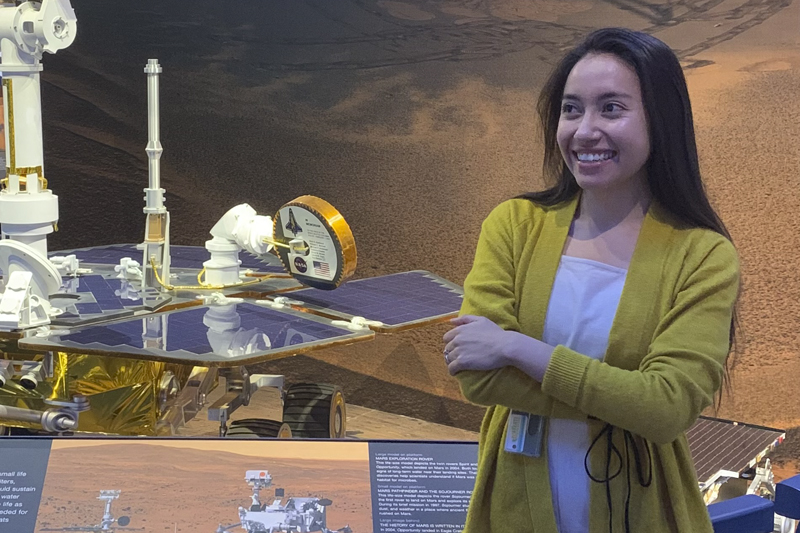 By UCLA Samueli Newsroom
As a child, Kat Echazarreta ’19 was fascinated by electricity. How does electricity work? And why? How can electricity be used to create new technologies? Now, this UCLA electrical engineering alumna is working at NASA’s Jet Propulsion Laboratory (JPL). She knows the answers to all those questions, and more.

Inside her world at JPL, Echazarreta is an electrical engineer with the Ground Support Equipment team where she designs, builds and tests equipment vital to the Europa Clipper mission. NASA’s goal is to launch the spacecraft into orbit around Jupiter’s moon Europa in 2024 to determine whether Europa can harbor conditions suitable for life.

Before landing her dream job at JPL, Echazarreta notes in her blog that her educational journey was not a straight shot.

Born in Mexico, Echazarreta moved with her family to the U.S. at the age of seven after her father received a work visa. She faced a language barrier at first, making it difficult to adjust to her new home. But within two years, she became a fluent English speaker. 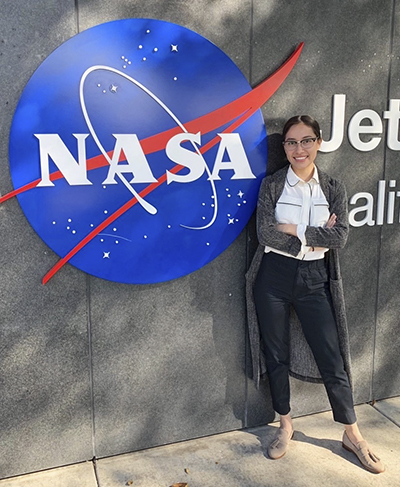 “It was definitely an obstacle for me to learn about a brand new culture and to learn a brand new language,” Echazarreta said. “I recall being made fun of for my accent, but I was determined to push through. It helped me become really hard working from a young age, and to not be afraid of a challenge.”

Echazarreta, a first-generation college student, credits her mom for instilling in her a strong work ethic and encouraging her to follow her passions in space, astronomy and math. After high school, she enrolled in the San Diego City College studying electrical engineering for three years before transferring to UCLA.

“When I first visited UCLA, I felt like I had found my second home,” Echazarreta said. “I had found the place that would help me become the engineer I wanted to become.”

As a transfer student, Echazarreta said it was difficult at first to keep up with the fast-paced curriculum. Navigating the quarter system wasn’t easy, especially because it seemed as though her classmates already knew one another. She overcame these challenges by readjusting her priorities.

“I realized that in order to succeed I needed to take care of myself,” Echazarreta said. “I had to learn how to prioritize myself in order to be fully present during class and study sessions.”

While at UCLA, Echazarreta was involved in robotics research, which provided hands-on experience with developing testing procedures that helped her secure her first internship at JPL.

Echazarreta was also active in the Center for Excellence in Engineering and Diversity (CEED) and the Society of Latino Engineers and Scientists (SOLES), both of which supported her academic endeavors and had a positive impact on her career.

Outside of her work at JPL, Echazarreta uses her social media to embolden and motivate others.

Echazarreta acts as a “big sister” for other young women interested in STEM, she said, creating and sharing content she wishes she had seen when she was in school and searching for internships and jobs.

“I hope that through my work with social media, other young women, girls and aspiring engineers will see that there is a place for them within these large organizations,” Echazarreta said.

With more than 26,000 followers on Instagram, Echazarreta regularly posts photos from her job and videos on what it’s like to be a woman in engineering. She also shares resources and inspiring stories about her personal journey to becoming an engineer.

“I hope that through my work with social media, other young women, girls and aspiring engineers will see that there is a place for them within these large organizations,” Echazarreta said. “It’s important for me to share my story with others who feel like giving up.”

For students interested in following a similar career path, Echazarreta suggests attending career fairs and conferences, and networking as much as possible. Mentors from internships can also help students find jobs after graduation.

“[Finding a job] takes persistence,” Echazarreta said. “It was five months before I heard back from JPL for my first position with them.”

Looking ahead, Echazarreta is starting a part-time Master’s program in electrical engineering this upcoming fall at Johns Hopkins University in Baltimore, while continuing to work full-time at JPL. “I’m excited to keep learning, earn larger technical leadership roles and continue to inspire others along the way,” she said.