Aydin Babakhani, a UCLA electrical and computer engineering associate professor, will develop advanced microchip sensors for a new class of heart pacemakers, thanks to $1 million in funding from the National Institutes of Health (NIH). Babakhani’s funding is part of a four-year, $2.4 million grant to a multi-institution research team.

Babakhani and fellow researchers have combined powerful sensors, stimulators that send out signals, energy-harvesting and delivery capabilities, as well as antennas on a single, ultra-energy-efficient microchip. The technology could lead to a new class of wireless pacemakers and defibrillators that are small enough to fit entirely inside a vein.

The new design works by sending low-energy, electromagnetic pacing pulses to the heart from where they are implanted. These new pacemakers, developed with doctors and engineers at the Texas Heart Institute and Rice University, will be wirelessly powered and will not require batteries. 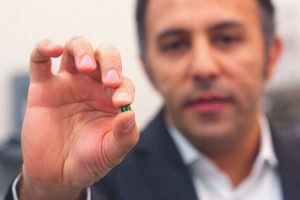 “One of the major challenges of this technology is maintaining the efficiency of wireless power-transfer as the device becomes very small, and the antenna becomes inefficient,” said Babakhani, who leads the UCLA Integrated Sensors (ISL) Laboratory. “We have addressed this issue by significantly lowering the power consumption of the electronics used in the pacemaker, integrating all the elements on a single chip, and designing antennas that resonate strongly with the input circuitry of the pacing chips.”