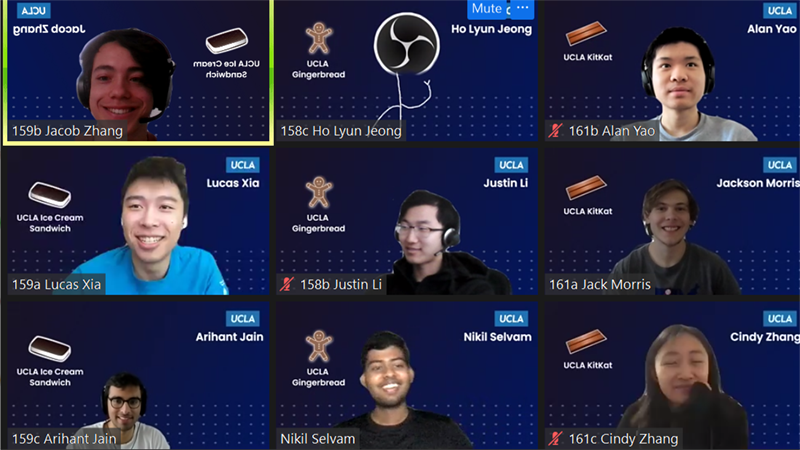 A UCLA Samueli School of Engineering team is one of 19 student groups in North America to qualify for the 2021 International Collegiate Programming Contest (ICPC) — the most prestigious collegiate computer programming contest in the world.

The annual ICPC global competition brings together teams of three students in computing disciplines to participate in multiple levels of regional competition, representing more than 3,000 universities in 100+ countries around the world. Contestants use their computer programming skills to solve real-world problems while fostering collaboration, creativity, innovation and an ability to perform under pressure.

Each of the ICPC regional competitions, held in a different location around the globe, is 3.5 hours long and contestants are tasked with solving a set of challenges using algorithms they design. Teams that solve the greatest number of problems in the fewest attempts, or take the shortest cumulative time, advance to the World Finals.

Over the past few decades, teams from the Association for Computing Machinery (ACM) at UCLA qualified for the ICPC World Finals multiple times and took first place in 1989. Due to the pandemic, the three rounds of regional contests were held virtually this year. Five UCLA teams participated in the competitions, and one of them — along with nearly 150 teams worldwide — made the cut for the 45th ICPC World Finals, which will be held in fall of 2022. The Computer Science Department and ICPC alumni will help fund the students’ travel.

“An interesting problem from this year asked for an algorithm to find the largest size of a cleaning robot that could navigate an entire maze,” Zhang said.

“An interesting problem from this year asked for an algorithm to find the largest size of a cleaning robot that could navigate an entire maze,” Zhang said. “While not a particularly difficult problem, the solution required a combination of several algorithms, such as dynamic programming, binary search and depth-first search, a data structure trick and attention to detail when implementing.”

Senior lecturer David Smallberg, who teaches core computer science courses at UCLA Samueli, has advised the UCLA club for several decades. The club’s members also help the teams prepare for the competitions. According to the students, this year’s regional competitions were more difficult than expected.

“For the team to succeed, the members’ algorithmic strengths should complement one another,” Smallberg said. “They should correctly assess when to work on independent problems and when to collaborate on one.”

Each UCLA team member takes on a different, pre-designated role for the competitions.

“I’m kind of a math specialist,” Zhang said. “Arihant is a Python (programming language) coder, which is rare in competitive programming but can be a big coding time advantage. Lucas covers all the areas and is the leader during competition time, kind of like a team captain.”

“ICPC participation, even if it’s just at the local level, helps students develop their skills in problem analysis and enlarge their algorithmic tool set,” Smallberg said.

ICPC held its first competition in 1970 and evolved into a multi-tier contest seven years later. Since then, the contest has expanded across the nation and much of the world. With corporate recruiters present at higher rounds of the competition, students can demonstrate their skills in front of potential employers by participating in ICPC contests.

“ICPC participation, even if it’s just at the local level, helps students develop their skills in problem analysis and enlarge their algorithmic tool set,” Smallberg said. “Employers love ICPC participation, so this can help in getting considered for internships and jobs, as well as doing well in technical interviews.”

The team will have more than a year to prepare, and although they will have graduated by next fall, they still plan to compete. After taking the summer off, the students will begin practicing again soon — both as a team and individually.

“We’ll be meeting to do extra difficult practice problem sets, since we know that the World Finals will be the most difficult problem set we’ve faced so far,” Zhang said.

For those interested in joining ACM ICPC at UCLA, the club will hold a general meeting on Sept. 30 at 7 p.m. in 4760 Boelter Hall, where students can learn more about the group’s fall kickoff event and tryouts.