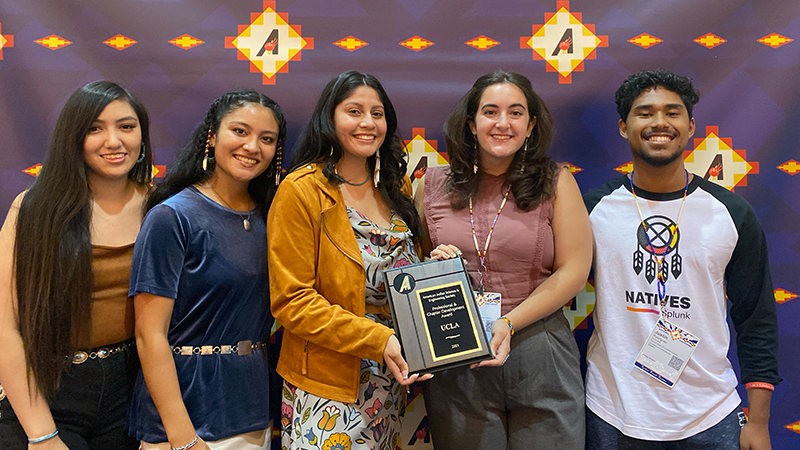 Prior to the award announcement, the UCLA student organization was named one of seven finalists among the more than 200 AISES chapters around the country. In August, 16 UCLA chapter members attended the conference in Phoenix, Arizona, where the group received the award for its efforts in helping student members launch their careers through workshops and networking events.

“Winning this award for the first time in such a hard year is unbelievable,” said Jorge De Dios Suarez, a fifth-year electrical engineering student at the UCLA Samueli School of Engineering and last year’s UCLA AISES chapter president.

“In Cherokee tradition, there is a story with [the moral], … ‘A finger cannot lift a pebble alone,’” said Gillian Vaughn.

In addition to professional development, UCLA AISES focuses on recruitment and retention of student members, outreach to the Native American community in Los Angeles and a technical project in which students design and launch a rocket. These activities are designed to support AISES’ overarching goal of increasing the representation of American Indians, Alaskan Natives and Pacific Islanders in science, technology, engineering and mathematics.

“In Cherokee tradition, there is a story with [the moral], … ‘A finger cannot lift a pebble alone,’” said Gillian Vaughn, a fourth-year electrical engineering student and the current UCLA AISES chapter president. “This story is supposed to teach you that you cannot do things alone, you must find a community or reach out to others when you need help. The reason I joined AISES was to build this community of Indigenous people in STEM and our allies.”

Native American and Pacific Islander students each make up less than 1% of the student population at UCLA so the club’s goal last year was to engage and support as much of the Native population as possible, De Dios Suarez said.

“I believe that both our professional development events and the revamp we did for all of our programs to find and target our events for the small native community helped us to stand out and be present in the national awards,” De Dios Suarez added.

Other programming in AISES at UCLA, which was established in 2005, included a Natives in STEM panel that featured six Native American professionals in the medical, engineering and environmental science fields and a resume review in partnership with AT&T.

“With our work last year, we are closer to the Native community in UCLA and LA than ever before,” De Dios Suarez said.

“Seeing the faces of the students when doing a hands-on project instead of staring at a screen was very fulfilling,” Noguera said.

This year’s UCLA AISES chapter has about 30 active student members. The club is open to all students, whether or not they are of Native American descent, who support the advancement of Native people in STEM. AISES also collaborates with UCLA’s Center for Excellence in Engineering and Diversity to recruit members and create a space for Native American students in STEM.

“I am excited to see what AISES will do in the coming years. With our work last year, we are closer to the Native community in UCLA and LA than ever before,” De Dios Suarez said.