UCLA Again Ranked One of the World’s Best Schools for Engineering, Computer Science 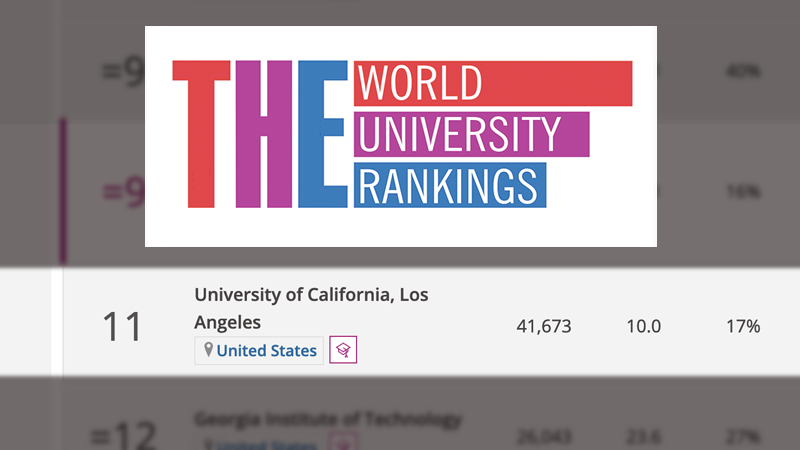 UCLA Samueli Newsroom
An annual global ranking of universities has again placed UCLA among the best schools in the world for engineering and computer science.

Times Higher Education, based in the U.K., released its 2022 subject rankings Wednesday for the two categories. Colleges and universities around the world are evaluated based on their undergraduate program performances across five areas: teaching, research, citations, knowledge transfer and international outlook. UCLA scored notably high in the research and citations indicators in both engineering and computer science.

“These high rankings reaffirm that UCLA is a premier research institution with top-notch engineering and computer science programs, among others. This is where faculty and students can thrive together in an atmosphere that fosters the exploration of big ideas to address the world’s toughest problems,” said Jayathi Murthy, the Ronald and Valerie Sugar Dean of the UCLA Samueli School of Engineering. “We collaborate to engineer change that will improve our shared quality of life. This achievement is a testament to the extremely high standards of excellence that infuse our entire school community.”

In the computer science field, the school was also ranked 11th in the world, seventh in the United States and second among U.S. public universities. This year’s rankings marked a jump from last year’s, which were 16th, ninth and third, respectively. Nearly 900 schools around the world were evaluated in the field.

“We are very proud of this recognition as we continue to grow the UCLA computer science program,” said Eli Gafni.

“We are very proud of this recognition as we continue to grow the UCLA computer science program,” said Eli Gafni, professor and chair of the UCLA Computer Science Department. “In the past few years, we’ve recruited some of the world’s best scholars in computer science disciplines to the faculty. They’ve already been making great strides in their research and in their teaching, and I’m sure their contributions, along with those of our students and veteran faculty, have had an indelible impact on our mission to educate the next generation of leaders in computer science.”