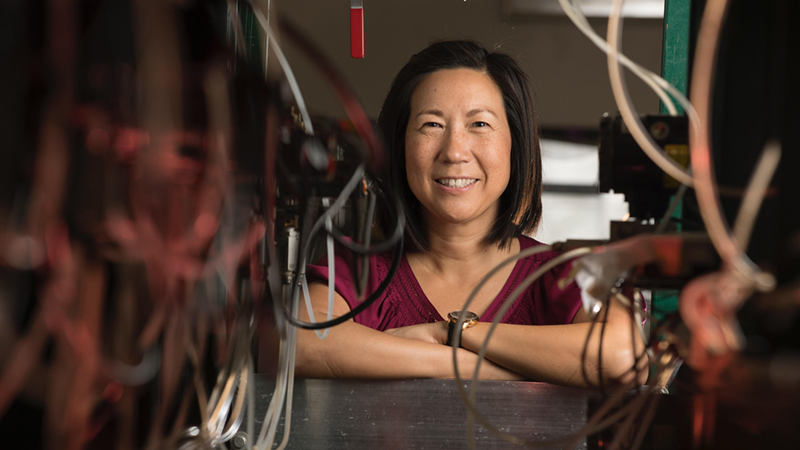 Courtesy of the Winny Dong
Winny Dong is one of 12 recipients of the Presidential Awards for Excellence in Science, Mathematics and Engineering Mentoring.

Dong, a former graduate student of materials science and engineering professor Bruce Dunn, is a professor of chemical and materials engineering and the faculty director of the Office of Undergraduate Research at California State Polytechnic University, Pomona (Cal Poly Pomona). She is one of the 117 teachers, mentors and mentoring organizations named by President Joe Biden on Feb. 8 as recipients of the 2022 Presidential Awards for Excellence in Mathematics and Science Teaching (PAEMST) and Presidential Awards for Excellence in Science, Mathematics and Engineering Mentoring (PAESMEM). Dong is one of only 12 individuals who received the PAESMEM awards.

“The work that I do, I don’t think of it just as the right thing to do, but as my personal responsibility for that privilege,” Dong said.

The awards “honor the dedication, hard work, and important role that America’s teachers and mentors play in supporting learners who will be future STEM professionals, including climate scientists, mathematicians, innovators, space explorers, and engineers.”

Born in New York, Dong spent the first 10 years of her life in her parents’ homeland of Taiwan before moving back to the U.S. and settling down in California, where her father was a mechanical engineering professor at California State University, Long Beach. Dong said she was inspired to become an engineer by her father’s own journey.

As a teenager in rural Taiwan in the 1950s from a low-income family, Dong’s father was faced with a difficult choice.

“He could either quit school to help his parents sell vegetables on the side of the road or he could quit school to become a cobbler’s apprentice,” Dong said.

But his teachers knew that he had the potential to do more and worked with him and his parents to find scholarship opportunities — leading him to become the first in his family to attend college, eventually earning a Ph.D. in physics from State University of New York at Stony Brook.

Now, Dong finds herself thinking of her father often when she works with students at Cal Poly Pomona.

“Not only did my dad inspire me to study engineering, but his story inspires me to try to open doors for my students — many of whom don’t have access to the same opportunities that others may have,” Dong said. “I see the work that I do as a way to pay it forward for the mentorship that my dad received.”

Without the help of nurturing teachers who took an interest in her father, Dong said she knows her life would have turned out very differently. As a result, Dong takes it upon herself to mentor students who themselves are first-generation, low-income or from underrepresented minority groups.

“The work that I do, I don’t think of it just as the right thing to do, but as my personal responsibility for that privilege,” Dong said.

Growing up in Southern California, UCLA was the campus she was most familiar with when applying to schools. Once she arrived on campus, Dong knew it was the right spot for her and ended up staying to complete all three of her degrees.

“The Materials Science and Engineering Department was small so it had the personal touch but the campus was huge, bringing with it all of the resources of a large, top-notch, diverse institution,” Dong recalled.

“The Materials Science and Engineering Department was small so it had the personal touch but the campus was huge, bringing with it all of the resources of a large, top-notch, diverse institution,” Dong recalled.

It was during the summer of her freshman year while working on a research project that she discovered her love of research. She worked with several professors, but it was Dunn, Dong said, who made her decide to stay for her master’s and doctoral degrees.

“He heads up a collegial and collaborative research group that is excellent in the science it produces but also provides a nurturing environment for his students,” Dong said.

Dong worked with Dunn to conduct research on sol-gel synthesized materials for electrochemical applications. Aside from a busy academic career, Dong was also part of the Bruin Masters swim club, which gave her the opportunity to swim alongside former Olympic gold medalist Mark Spitz and now Nobel laureate Andrea Ghez.

“Where else would you have an experience like that?” Dong said. “The best things about my time at UCLA are the people I got to know, from my roommates in Hedrick, to my classmates, to my fellow graduate students in Dunn’s lab, and of course, my faculty mentors.”

Dong credited her Ph.D. education at UCLA for training her to think critically in the lab and figure things out for herself. It was the mentoring by Dunn, however, that inspired her to want to pursue a career in teaching.

“I didn’t really know that I wanted to teach,” Dong said. “But from observing Bruce Dunn and my dad, I knew that I liked the relationships that faculty members formed with their students. That’s what made me apply to teach at Cal Poly Pomona, a primarily undergraduate institution where there are many opportunities to work closely with students.”

Prior to assuming her current role as faculty director of Cal Poly Pomona’s Office of Undergraduate Research, which aims to provide every student at the school with “learn by doing” experiences, Dong was the faculty director of the school’s McNair Scholars Program. The federally funded program prepares students who are underrepresented or first generation with financial need for doctoral studies.

“I am proud and happy to see my students succeed,” Dong said. “But what I also think about is how proud their parents are, how their younger siblings look up to them and are inspired by them, and how their families might have the chance to live a different life because of my students’ decisions to pursue higher education. Their hard work and accomplishments impact so many people besides themselves.”