From a three-person startup to a $1.6-billion global company with more than 5,000 employees–what’s one big reason for Viasat’s success?

Another reason for Viasat’s long-term success, Miller noted, was that it still carries the mindset of a new company. 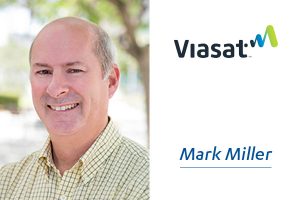 “Even though we were founded 30-plus years ago, we still think of Viasat as a perpetual startup,” he said. “We’re constantly seeking opportunities to disrupt established markets with new innovations.”

Miller was interviewed by Jayathi Murthy, UCLA Samueli’s Ronald and Valerie Sugar Dean of Engineering. She started the conversation asking Miller about his early years growing up in Ventura, and how his burgeoning interests in communications technologies started.

“I was always curious how TVs and radios worked,” he said.

After several years with MA/COM Linkabit, Miller and two colleagues set out on their own, founding Viasat in 1986.

The company’s first contracts were helping other companies with their proposals, he said. Soon after, Viasat started building its own projects, making prototype hardware and scaling it up for production.

Today the company, based in Carlsbad, Calif., operates some of the world’s most powerful communications satellites, providing high-speed, high-quality broadband internet to customers across North America, Central America, the Caribbean, a portion of northern South America as well as the primary aeronautical and maritime routes across the Atlantic Ocean bridging North America and Europe. Its customers include hundreds of thousands of residential subscribers, and its in-flight internet service is available on more than 60,000 flights monthly. It also offers a range of communications products for governments and commercial broadband networks.

As Viasat’s CTO, Miller oversees the teams that do everything from designing and building its next-generation satellites to developing advanced cybersecurity technologies.

But despite his C-level leadership role, Miller noted that the electrical engineer in him has never left.

“I love the technology, and I still do a lot of hands-on work myself,” said Miller, who specializes in modulation, coding, and digital signal processing.

Miller said that one of the company’s next major forays could be in connected cars. But the bigger goal is to make the internet accessible, affordable and secure.

“How can we connect the final 3.5 billion people in the world?” he asked. “Satellite broadband is great for this.”

For students interested in working in the communications industry, Miller advised that adaptability and flexibility are key qualities for a successful career.

“Demand for broadband and video are not slowing down, in fact demand is only getting bigger and more global,” he said of the industry. “It’s important we look for new ways and methodologies to effectively deal with expanding demand and the changes that naturally result in how the internet will deliver meaningful impact.”

Before his talk, Miller met with UCLA Samueli faculty members, then with a small group of students. Viasat recruiters met with students following the formal program.

Established in the 2016-17 academic year, the Ronald and Valerie Sugar Distinguished Speaker Series brings national and international leaders in engineering and related fields to campus. The program is primarily geared toward UCLA Samueli Engineering students, giving them an opportunity to hear first-hand from technology leaders and innovators on what it took to get where they are, and the critical issues facing society that engineers must address.

The series was made possible by a major gift to UCLA Samueli Engineering from the Sugars, both alumni of UCLA.