THOR, a humanoid robot under the command of UCLA and University of Pennsylvania, has kicked its way to the top of the robotic soccer world, winning first place and a top technology trophy on July 22 at RoboCup, an annual robot soccer tournament held this year in Hefei, China. More than 400 teams from 40-plus countries participated. 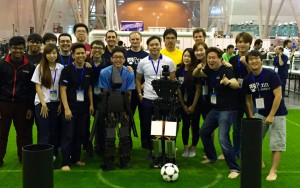 UCLA and University of Pennsylvania students partnered to lead Team THORwIn (named for THOR and Darwin, a smaller robot that the team has competed with in the past) to victory in the adult-size humanoid robot category with a 5-4 win in the finals over Baset Robot Laboratory of Tehran. Team THORwIn also earned RoboCup’s Louis Vuitton Cup Best Humanoid Award, given to the team that best demonstrates advances in artificial intelligence and robotics.

The world championship title is the second in a row for UCLA and the fifth consecutive championship — and second Louis Vuitton award — for team leader Dennis Hong, a professor of mechanical and aerospace engineering at the UCLA Henry Samueli School of Engineering and Applied Science. Hong led RoboCup teams for Virginia Tech before joining the UCLA Engineering faculty in 2014.

THOR, short for Tactical Hazardous Operations Robot, is a 5-foot-tall, 119-pound humanoid with hardware designed and built primarily by students in Hong’s Robots and Mechanisms Laboratory (RoMeLa) at UCLA. The software that guides THOR to make the right moves on the field was developed primarily by students in UPenn’s General Robotics Automation, Sensing and Perception (GRASP) Laboratory, led by professor Daniel Lee. 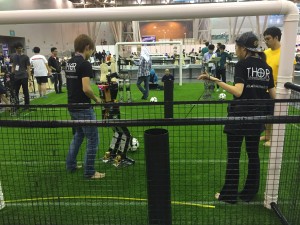 RoboCup athletes are autonomous robots that are programmed to perform independently of humans once they are on the soccer pitch. To be successful they must combine speed and agility, kick a ball with either foot, maneuver around the field and be able to sense the locations of opposing players as well as the goal.

The two laboratories have worked together for years and entered THOR in the DARPA Robotics Challenge last month in Pomona.

In an email to Team THORwIn members who did not go to China, Ahn reported that conditions were challenging in the early rounds: Electricity was spotty as many teams powered up their robots at the same time. And the white background in the competition area made it difficult for the robot’s vision-processing equipment. “However,” Ahn wrote, “as it is the same for all teams and as four-time defending champs, we are figuring out our ways through these obstacles successfully.”

Alumnus Virgil Bourgon, who earned a bachelor’s degree from UCLA Engineering in 1961 and a master’s degree in 1964, and his wife Mary sponsored the team’s China trip. 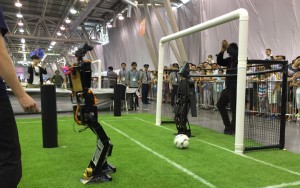 While today’s adult-sized humanoid robots lumber around the field slowly, the smaller robots in other categories are faster and more agile. Winners in these categories included Carnegie Mellon University, the Chiba Institute of Technology in Japan, and the University of New South Wales in Australia.

The ultimate goal of RoboCup is to host a competitive human vs. robot match by 2050.

At the end of the event, the teams met for a symposium to address the latest research in robotics.

“RoboCup is action-packed,” said Hong. “Thousands of people from all around the world with cutting-edge robots and technology are all in one place. While it is great to win, the event is more about friendship than competition.”

See this video of THOR in action at last month’s DARPA Robotics Challenge.