Inspired by how dew drops form on spider webs, UCLA engineers and mathematicians have designed a unique and effective water vapor capture system that could be used to produce clean, fresh water, or to recycle industrial water that would otherwise be wasted.

Their system is a dense array of parallel cotton threads strung vertically, with a steady stream of water droplets flowing down the strings. Rising water vapor, pushed upward by a fan, is captured by the “web” of water droplets and condenses. The resulting water is then moved into a collecting container.

The researchers reported a 200 percent increase in efficiency using this method compared to existing technologies designed to capture water vapor.

The study was published in Science Advances and includes a theoretical model of the system and experimental results from a prototype.

In addition to harvesting water from the atmosphere, the method could be used to produce clean water from the evaporation of high-salinity wastewaters, such as those produced from oil and gas production, or from irrigation runoff.

It could also be used to capture steam escaping from cooling towers in power plants and industrial facilities. The captured water could then be recycled back into the cooling system.

“The growing global concern over the scarcity of fresh water has motivated the development of economically feasible ways to capture water vapor,” said Sungtaek Ju, professor of mechanical and aerospace engineering at the UCLA Samueli School of Engineering and the principal investigator of the study. “This idea of imitating the natural rain cycle to produce clean water, called ‘the humidification-dehumidification process,’ has been around for quite some time. However, making such a system that’s inexpensive to build and operate has been a major challenge. Our system is inexpensive, lightweight and energy-efficient. These factors can potentially help overcome challenges for its adoption.”

Some proposed water vapor capture methods have used chilled metal to make water vapor condense on a surface. But limited surface areas, as well as weight, material and manufacturing costs, have slowed their adoption. Similarly, methods using spray nozzles or electric fields use too much electricity to be viable.

A key element in the UCLA team’s system is its ability to consistently generate water droplets of the same size and constant flowing speed. These water beads enable the system to effectively capture water vapor, without causing significant pressure drop, and hence fan power consumption.

“The liquid beads form highly curved surfaces that enhance the rate at which water vapor diffuses through the air,” said Abolfazl Sadeghpour, a UCLA mechanical engineering graduate student and a co-lead author of the study. “Simply said, this is analogous to a snowball rolling downhill. The beads are picking up water vapor as they travel down. And while a drop may seem small, think of an entire array of threads working constantly. The water vapor harvested could add up to quite a bit.”

The research was supported by the National Science Foundation and the Simons Foundation. 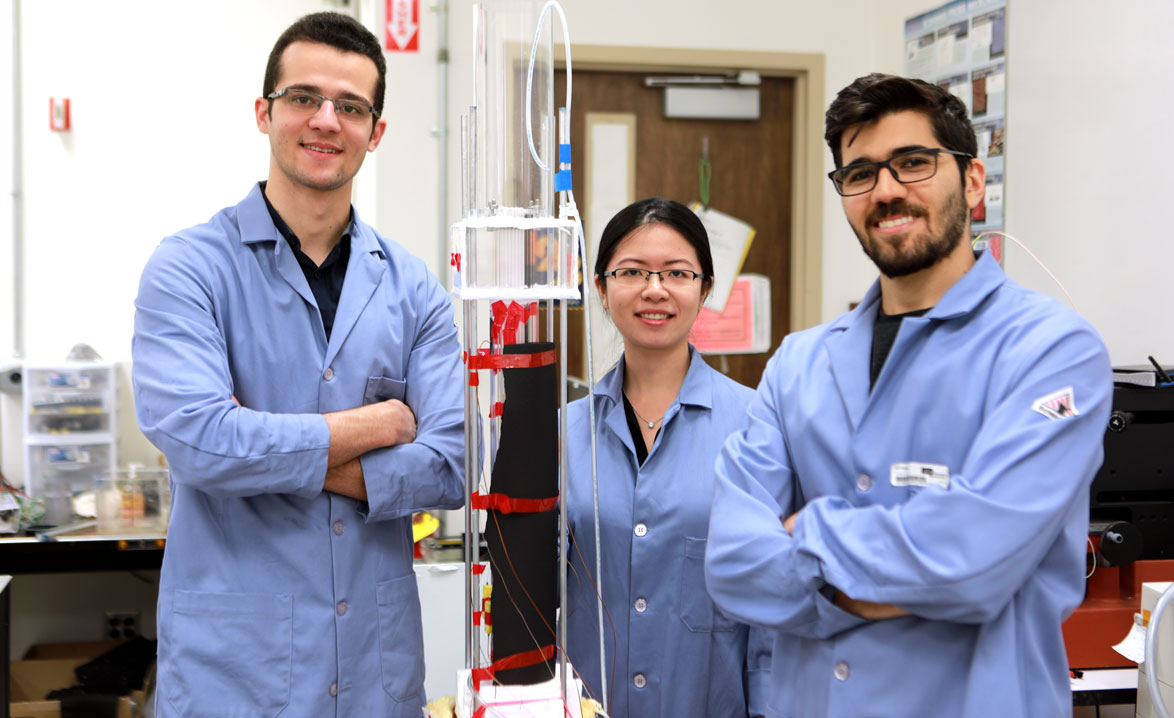