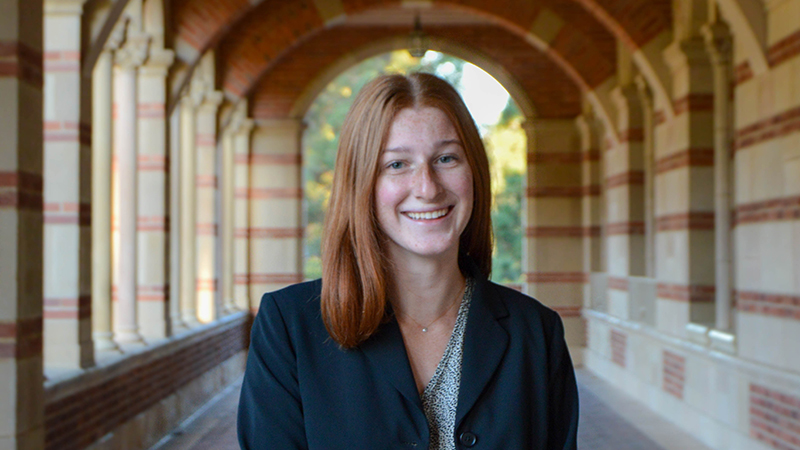 If you’ve taken a tour of the UCLA Samueli School of Engineering lately, chances are you may have met fourth-year mechanical engineering student Aleksandra Dudek.

An Engineering Ambassador since her freshman year, Dudek welcomes new and prospective students to UCLA by taking them on tours of the school, and sharing with them her firsthand knowledge of what it’s like to be an engineering student.

Dudek’s love for the field runs deep. From space-related projects in elementary school to recent internships at major technology companies, engineering has always played a major role in Dudek’s life.

Growing up near Pasadena in a house less than half a mile away from NASA’s Jet Propulsion Laboratory (JPL), Dudek said many of her schoolmates’ parents worked at JPL and would often volunteer their time at the school.

“I remember having a small, after-school program in the fourth grade where we worked with NASA scientists to make comets out of dry ice and dirt while learning about the Rosetta Mission,” Dudek said.

“I believe you can’t truly know whether you like something until you try it, so… I always encourage my tour groups to seek opportunities and take advantage of them when they come,” Aleksandra Dudek said.

Later in high school, Dudek had an opportunity to participate in the new Space Academy — a partnership between JPL and the public school she attended — where students grouped in teams of four were presented with a challenge to design a launcher using solely elastic energy. Dudek and her teammates managed to launch a payload of a light bulb and a camera to the highest altitude at JPL’s Mars Yard.

“[It] was super exciting considering that before this academy, none of us had used a saw, and by the end we had custom cut and fastened two-by-fours and elastic exercise bands to make this powerful launcher!” Dudek said of her all-female team’s experience on the project.

A first generation Polish American and the youngest child in a family of doctors and dentists, Dudek followed her two older sisters’ footsteps in becoming a Bruin. At first, she tried to combine her love for math and physics with her family’s passion for medicine by choosing to major in bioengineering, but she quickly realized that she preferred the mechanical aspects of engineering so she switched her major while keeping her focus on exploring medical devices.

She said she particularly enjoyed mechanical and aerospace engineering class MAE 107: Introduction to Modeling and Analysis of Dynamic Systems.

“This course is known to be one of the most challenging mechanical engineering courses offered, but I really appreciated the mathematical component and this introduction to controls,” Dudek said.

In the fall, she will be starting research in mechanical and aerospace engineering assistant professor Brett Lopez’s Verifiable and Control-Theoretic Robotics Laboratory to further explore controls engineering, a path she said may lead her to pursue a graduate degree with a focus in the area.

Often the only woman in her group projects or lab sections, Dudek said one of the greatest challenges she has faced is a sense of impostor syndrome and isolation.

“Although I have been lucky to not have any of my male peers say anything to question my abilities at UCLA, this feeling is rather difficult to shake off.” Dudek said. But the experience also encouraged her to seek out female mentors at the school and through internships.

Dudek found a community in Den Operations at UCLA, a student group that leads the section of student sports fans (affectionately called “The Den”) at UCLA sporting events. From guarding the Bruin Bear during Beat ‘SC Week to cheering on the Bruins in the PAC-12 basketball tournament, Dudek showed Bruin spirit and made some close friends beyond engineering. The experience has helped her feel especially connected to the Bruin family, she said.

Dudek’s UCLA experiences also opened doors for her to pursue internships in a range of engineering disciplines. Because she’d gotten ahead by taking more courses online during lockdowns in spring and fall of 2020, she was able to take the winter quarter off from school in her junior year to work on Tesla’s Megapack team, where she used computer-aided drafting and finite element analysis to design powerful batteries and sustainable energy products.

“Leaving my comfort zone to work in this industry helped me learn that I can feel fulfilled in a job beyond medicine, but that the role I am in and the company that I work for must have a mission that aligns with my values, whether it be striving to improve health  care or accelerating the transition to sustainable energy,” she said.

More recently, Dudek worked as an intern over the summer in medical device manufacturer Stryker’s neurovascular division, which followed a previous internship with the company’s endoscopy team. She got to work in the medical field to which her family has close ties, even developing test methods and models that help showcase the efficacy of the company’s neurovascular devices to the U.S. Food and Drug Administration and other regulatory agencies.

Dudek said her internships have not only been a great opportunity to get hands-on experience in industry but they also affirmed in her mind the versatility of engineering — an insight she likes to share with new and prospective students while showing them around UCLA Samueli on the tours she leads.

“I believe you can’t truly know whether you like something until you try it, so… I always encourage my tour groups to seek opportunities and take advantage of them when they come,” Dudek said. “You really can’t predict what that opportunity may bring.”