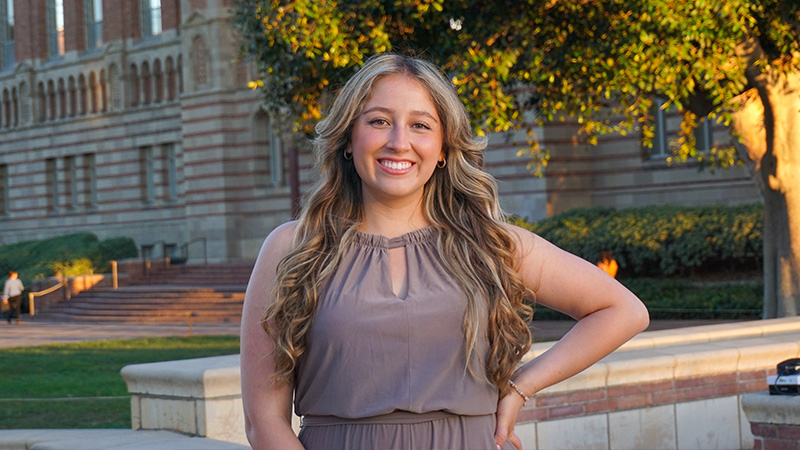 Long before she became a Bruin engineer, Kelly Espino said she knew what she had to do to help fulfill the dreams of her immigrant parents who put their own career aspirations aside to support the family.

The now fourth-year civil engineering student at the UCLA Samueli School of Engineering is a first-generation Mexican American and the oldest of three children in her family. Her parents immigrated to California from León, Mexico. Both her homemaker mother, who had wanted to become a computer scientist, and her truck-driving father, who had aspired to be an architect, gave up their career goals when they moved to the United States. Her parents’ sacrifices and high hopes for their children instilled in Espino an early determination for success.

“Being the eldest sister and grandchild, my family and I place a lot of responsibility on my shoulders to set an example for those after me,” Espino said. “As a little Papi’s girl, I had set out to be an architect like he wished, but the older I grew, the more I fell in love with my own passions like physics, calculus and problem-solving.”

Being the eldest sister and grandchild, my family and I place a lot of responsibility on my shoulders to set an example for those after me,” Kelly Espino said.

But it wasn’t until a graduate of her high school who gave a talk to her junior class that Espino knew she wanted to pursue a career in civil engineering, or “the math of architecture,” as she recalled the guest speaker called it.

Like many first-generation students who came from immigrant families, however, Espino knew little about the American university system — how it works and how to prepare oneself for college academically, financially and socially.

She credited the Center for Excellence in Engineering and Diversity (CEED) at UCLA Samueli for helping her navigate the difficult journey, having to transition from a high school where 90% of the students are Hispanic to a community with far fewer classmates who look like her.

“At school, CEED provided me a home away from home,” Espino said, “CEED is the best thing that could have happened in my undergraduate career. They are the reason I have been able to excel in school and in the industry.”

It was also through CEED that Espino was introduced to the Society of Latinx Engineers and Scientists (SOLES), UCLA’s student chapter of the Society of Hispanic Professional Engineers (SHPE), where she could connect with fellow Latinx students.

“I was able to surround myself with people who spoke my language and understood my experiences, which is invaluable when experiencing impostor syndrome and being under such a heavy culture shock,” Espino said.

Espino enjoys the versatility of the civil engineering major — especially structural engineering —because classes such as Intermediate Structural Analysis challenged her to use her knowledge to solve real-world problems. Outside of the classroom, Espino has had the opportunity to apply her technical skills toward both construction and engineering internships at Granite Construction, PCL Construction, and Burns and McDonnell.

“With all of these experiences, I have learned the value of leaving a good impression and loyalty, never burning a bridge, and [I’m] now receiving full-time offers for after graduation,” Espino said.

Espino also has learned the importance of paying it forward by actively contributing to the Society of Latinx Engineers and Scientists at UCLA.

In her first year, Espino and her friends would attend SOLES’ meetings as general members, but over time, she said the group’s outreach efforts caught her attention and she started working on SOLES’ LeaderSHPE Jr. Retreat for high school students. She had such a positive experience interacting with the students that she became the event’s director in her sophomore year during the COVID-19 shutdown.

At school, CEED provided me a home away from home,” Espino said, “CEED is the best thing that could have happened in my undergraduate career. They are the reason I have been able to excel in school and in the industry.” Espino said.

At the encouragement of the outgoing president, Espino decided to run for president of SOLES in her junior year and won the race against three senior candidates. With the help of her executive board, she set out to improve and expand the organization. Under her leadership, the UCLA chapter was awarded the No. 1 Regional and National SHPE Chapter of the year in 2021 — a first for the organization.

With her reelection as president for this school year, Espino said she hopes to continue growing SOLES, including its outreach events such as Noche de Ciencias that highlight STEM career paths for K-12 students.

“It reminded me of the first time I ever experienced engineering, and how big of an impact it makes to students of my background,” Espino said. “Outreach remains one of the most powerful future changers in my eyes.”

Espino is on track to graduate this spring and says she hopes to either start her career in structural engineering or begin a master’s degree in the field. Attributing her leadership skills to her experiences at UCLA, she said she wants to create new memories in the future and conquer new challenges, just as she has done with CEED and SOLES.

“I hope to take these tools and dominate in all the rooms I enter in the future, showing the power of a Latina who remembers her upbringing,” Espino said. “I plan to instill these teachings in my children [one day] and the community, to help them succeed and use their Latin-ness and background to propel their perspective and career development, but mostly their happiness.”