Robotics may drive the future of healthcare

Robotics may drive the future of healthcare

Robots might someday be a regular presence in hospitals, and that’s not a scary future, says Jacob Rosen. “We are in a midst of a robot revolution,” he says. “It’s focused on meeting the demands of a growing worldwide population and the quest for a high-quality, long life,”

The utility of this technology is clear if you imagine you’re an astronaut on the International Space Station (ISS), says Rosen. Your time is the most valuable asset onboard the orbiting observatory, and let’s say you’ve been tasked with dissecting a rodent as part of an experiment to study the effects of long-term exposure to microgravity on bone density. However, your expertise is aeronautical engineering, not surgery. The presence of a “surgical robot” onboard the ISS would allow scientists who are proficient in surgical techniques on Earth to remotely operate the surgical robot on the ISS via a surgical console, explains Rosen. A professional surgeon on Earth could operate on the rodent while you’re working on an aeronautical engineering project. This technology would also be useful on long-duration missions to other planets, for example. “Surgical robotic systems will accompany astronauts and provide the necessary healthcare for scenarios that may evolve during such a journey,” Rosen says.

Rosen leads multidisciplinary groups developing both wearable robots (exoskeletons) useful in physical rehabilitation—for example, following a stroke—as well as surgical robots that can automate subtasks of surgical procedures based on learning algorithms. He holds dual appointments in the Department of Surgery and the Department of Bioengineering, and he works closely with his collaborators at the department of neurology and serves as a member at the Center for Advanced Surgical & Interventional Technology (CASIT) – in the David Geffen School of Medicine.

“The entire field of medicine is shifting from a human-based service provider to automation enabled by artificial intelligence,” says Rosen. “This trend is promoted and enabled in part by robotic technology.”  Rosen is quick to note that robots aren’t entirely replacing humans, however. “The human is still in the loop as a decision maker.”

Rosen is currently developing a two-armed wearable robotic system—an exoskeleton—useful in physical therapy. The two-armed design is critical because simultaneous arm movements engage both sides of the brain, says Rosen. “And most of the activities of daily living require the involvements of both arms in order to complete the task,” he says. Rosen and his team envision the exoskeleton helping with motor control rehabilitation for stroke patients, a critical need since roughly three quarters of stroke survivors are left with a permanent disability that limits them from utilizing their arms and hands in activities of daily living. “A machine has an endless capacity to treat people, and a patient can practice with the assistance provided by the exoskeleton system as long as needed to recover lost motor control functionality,” says Rosen. Human physical therapists, on the other hand, suffer from fatigue and may not be available in remote areas. The intent of surgical robotics is not to eliminate human care from the therapeutic process, however, Rosen points out. “The therapist’s intuition and decision making is very much needed, but the act of delivering the care itself can be conducted by the robotic system.”

Recent advances in virtual reality create an ideal framework for robot-assisted rehabilitation, says Rosen. A gaming environment that is both physically and intellectually engaging is one of the keys to the success of therapy that may require multiple repetitions of arm and hand movement, he says. Rosen and his team are exploring how to make physical therapy both fun and effective by engaging the patient in immersive games. “We’re intelligent and curious creatures. We like to play games.”

When Rosen isn’t designing or building robots, he’s rowing. Rosen has competed internationally as a rower, and he assists the UCLA men’s rowing head coach by getting rowers involved in research analyzing the kinematics and dynamics of the rowing stroke. 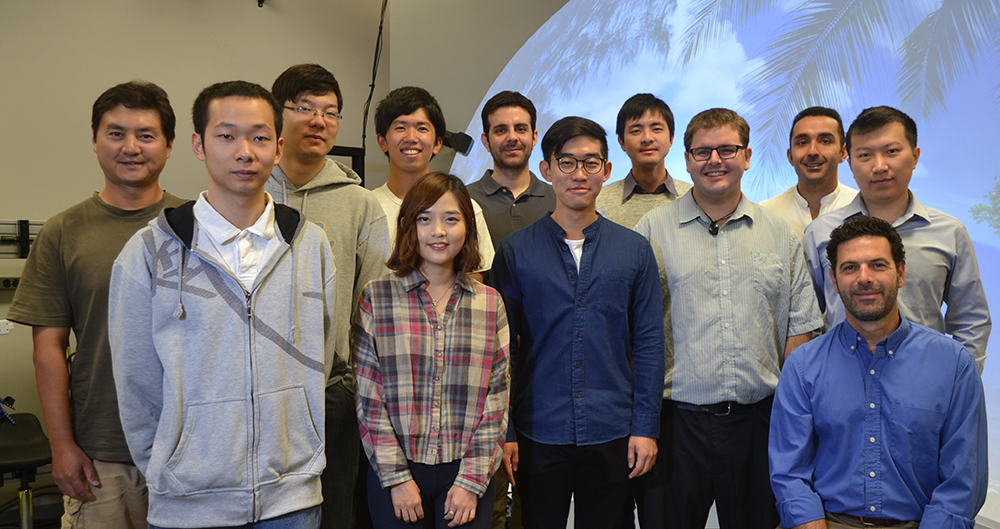