Yang Yang, a professor of materials science and engineering at the UCLA Henry Samueli School of Engineering and Applied Science, has been named the holder of the Carol and Lawrence E. Tannas Jr. Endowed Chair in Engineering. This chair is the first in the world dedicated to the area of electronic information displays.

The chair was established with a gift from Lawrence Tannas Jr., a UCLA Engineering alumnus and executive in the electronic information display industry, and his wife, Carol.

Yang’s research focuses on conjugated polymers and organics, polymer LEDs (light-emitting diodes), and related polymer electronic, photonic and bio-devices. His work with polymer solar cells has led to the creation of higher quality, more affordable and energy-efficient materials for use in consumer electronic devices such as flat-panel televisions, plasma displays and cell phones, as well as electronic information displays.

“In the last decade, Yang has made significant advancements in the application of organic LEDs (OLEDs) to electronic displays. Further, his groundbreaking work in the area of polymer solar cells has also achieved considerable attention,” said Vijay K. Dhir, dean of UCLA Engineering. “This chair will not only help Yang continue his work as a leading academic and educator, but it will also support his continued efforts in making vital contributions in these very important areas of research.”

Yang has published more than 200 scientific papers, been invited to give more than 100 presentations and holds 11 U.S. patents. Last year, he was featured as one of 2010’s “hot” scientists by Thomson Reuters’ ScienceWatch, and the publication’s “Hot Papers” database categorized eight of his recent reports as highly cited. In particular, a study in Nature Photonics from 2009 was cited more than 200 times in just 18 months.

“It is a tremendous honor to become the Carol and Lawrence E. Tannas Jr. Endowed Chair,” Yang said. “I am particularly impressed by Mr. Tannas’ vision and contributions to the area of electronic display technology. I look forward to using this endowment to enrich education here at UCLA Engineering, as well as enhance research that will help create more energy-efficient display technology.”

Yang received his bachelor’s degree from National Cheng-Kung University in Taiwan and went on to earn his master’s and doctorate in physics and applied physics from the University of Massachusetts at Lowell. Prior to coming to UCLA in 1997, Yang worked at UC Riverside as a postdoctoral researcher and at UNIAX Corp. (now DuPont Displays) in Santa Barbara as a research staff member.

Yang is the faculty director of the Nano Renewable Energy Center at the California NanoSystems Institute at UCLA and serves as director of the Center for Organic Opto-electronics Technologies at Zhejiang University in China. He is also the faculty adviser for the UCLA student branch of the Society for Information Display (SID), which was founded at UCLA in 1962. 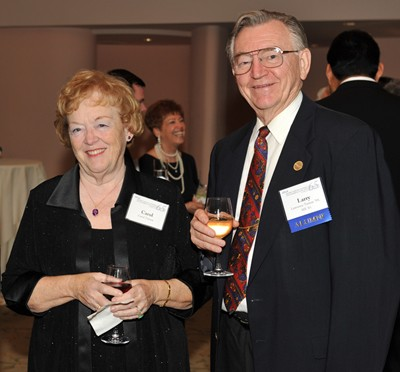 “It is gratifying to know that our gift will help UCLA Engineering for many generations to come by supporting the teaching and research activities of a distinguished faculty member like Professor Yang,” Lawrence Tannas said.

Tannas, who earned his bachelor’s degree in 1959 and master’s in 1961 from UCLA, is president of Tannas Electronic Displays Inc., a company specializing in research, development and licensing of intellectual property for preparing liquid crystal displays used in avionics. As president of Tannas Electronics, he also devotes his time to consulting, lecturing and research. Tannas is considered one of the foremost experts on electronic displays.

Tannas is also a fellow and past president of SID and is presently on its board of directors. Today, the UCLA Engineering library has the only complete repository of SID publications in the world, the result of Tannas generously donating his comprehensive library of SID journals.