Recently, we received a note from alum Ivan Gargurevich MS ’80, PhD ’97 not about his own accomplishments but those of chemical and biomolecular engineering professor emeritus Eldon Knuth.

As a past member of Knuth’s Molecular Beam Lab, Gargurevich asked, “Would it be possible to let the UCLA engineering community know of Professor Knuth’ s World War II service? In a time when there seems to be many challenges facing the nation, it is good to remember our country’s heroes.” We couldn’t agree more.

Prior to his 35-year tenure at UCLA, Knuth helped liberate the city of Metz, France, while serving in the U.S. Army during World War II. In 2019, nearly 75 years after his wartime service, the French government appointed Knuth a Knight in the French National Legion of Honor and awarded him the corresponding medal. The Legion is the highest French order of merit, established in 1802 by Napoleon Bonaparte to recognize and commend civilians and soldiers. 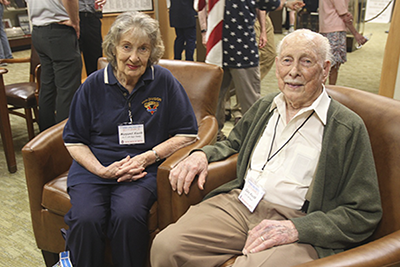 Knuth was drafted into the Army at the end of his first term at Iowa State College and soon found himself reporting to the 95th Infantry Division, which was preparing for deployment to General George Patton’s 3rd Army in France.

One of the objectives of Patton’s Army was to liberate the heavily guarded city of Metz. On Nov. 14, 1944, Knuth’s battalion attacked the German-held Fort Jeanne d’Arc, the largest of the forts surrounding Metz. He and about 30 other soldiers were trapped for five days behind enemy lines in the dead of winter with meager supplies.

“When we attacked, our troops to our right and to our left were repelled by the intense fire from the German line,” recalled Knuth. “The German line closed behind those of us who had penetrated the line. We — about 10% of the battalion — were trapped! Supplies were dropped to us from an artillery spotter aircraft. I received D-rations of chocolate bars but no dry clothing or blanket.”

Despite being within the view of the enemy fort, the trapped group suffered only one death. On the fifth day, Nov. 19, friendly troops broke through the German line and came to their rescue. Knuth was diagnosed with trench foot, a painful condition caused by prolonged exposure to cold and wet conditions. Three days later, on Nov. 22, the German general in Metz surrendered. After nine months of hospitalization, Knuth was discharged with 50% disability.

Knuth started his engineering career by enrolling at Purdue University where he received a bachelor’s and master’ s degree in aeronautical engineering. He received his Ph.D. in aeronautics from Caltech in 1953. After a short stint in the aerospace industry, Knuth joined UCLA Engineering in 1956. He became a full professor in 1965 and served as department chair for six years. While at UCLA, Knuth wrote the book “Introduction to Statistical Thermodynamics” and authored or co-authored more than 100 scientific papers.

On the occasion of this belated award from France, we thank Professor Knuth not only for his service to the university, but also for his commendable efforts during World War II.