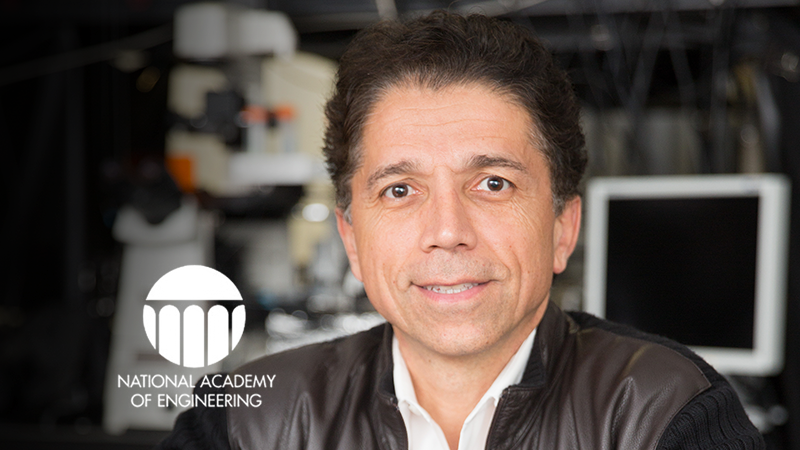 UCLA Samueli
Bahram Jalali has been elected to the National Academy of Engineering.

UCLA Samueli
Bahram Jalali, a professor of electrical and computer engineering at the UCLA Samueli School of Engineering has been elected to the National Academy of Engineering, among the highest professional honors that can be granted to an American engineer.

The academy announced today its 2022 class of 111 members and 22 international members. Jalali, who holds UCLA’s Fang Lu Endowed Chair in Engineering and a joint appointment in the Bioengineering Department, was elected “for contributions to silicon photonics, high time-resolution scientific instruments, and biomedical imaging.”

A member of the California NanoSystems Institute at UCLA, Jalali has made landmark advances in silicon photonic technologies, which enable light to be utilized on silicon-based platforms such as semiconductors. Most prominently, he led the development of the first silicon laser and the first lightwave integrated circuits on silicon-complementary metal-oxide-semiconductors, both of which are key milestones in harnessing optical technologies for computing.

Jalali has led a series of record-setting breakthroughs in imaging and sensing technologies, including some of the world’s fastest cameras that can take snapshots at hundreds of millions of frames per second. He is the inventor of photonic time stretch and radio frequency-based optical imaging, methods that enables nonstop imaging and measurement techniques at billions of frames per second without using a camera. Combined with artificial intelligence, these technologies have opened up new applications in cell biology and diagnostics, such as detecting rare cancer cells in blood.

An author of more than 300 papers in peer-reviewed publications that have been cited more than 25,000 times, Jalali holds 32 U.S. patents and 11 foreign patents. His inventions have led to the founding of several successful start-up companies.

Among the many accolades he has received are the R.W. Wood Prize from the Optical Society of America for creating the first silicon laser; Institute of Electrical and Electronics Engineers (IEEE) Optical Society’s Aaron Kressel Award; the Achievement Medal from the U.K.-based Institution of Engineering and Technology; and the Pioneer in Technology Award from the Society of Brain Mapping & Therapeutics. He is a member of the National Academy of Inventors, and a fellow of IEEE, the Optical Society of America, the American Physical Society, the American Institute for Medical and Biological Engineering and SPIE, an international professional society for optics and photonics.

Jalali received his Ph.D. in applied physics from Columbia University in 1989. Prior to joining the UCLA faculty in 1993, he worked at the Physics Research Division of Bell Laboratories in Murray Hill, New Jersey, from 1988 to 1992. He currently serves on the Board of Visitors of Columbia University School of Engineering and Applied Science.

Founded in 1964, the National Academy of Engineering is a private, independent, nonprofit institution. It is part of the National Academies of Sciences, Engineering, and Medicine, with more than 2,000 peer-elected members and international members, comprising senior professionals in business, academia and government who are among the world’s most accomplished engineers.