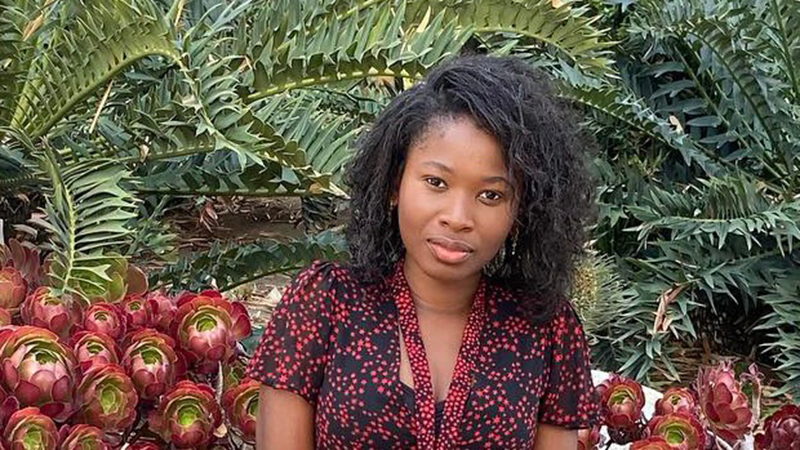 UCLA Samueli
On a high school field trip in Burkina Faso, Awa Kologo visited another school in a neighboring town in the landlocked country in West Africa. The schoolhouse was a red clay structure with no windows or classroom doors, and the average room strains to accommodate nearly 100 students despite being built to hold far fewer.

The trip was intended to help Kologo’s class appreciate the luxury they had in their own school, but for Kologo, the experience served as an inspiration.

“Since that day, I decided I wanted to become a civil engineer and build schools around the world in marginalized neighborhoods,” said Kologo, now a fourth-year civil engineering student at the UCLA Samueli School of Engineering.

After graduating from high school with a science degree, Kologo decided to move to the United States by herself so she could pursue a college education. She lived with her sister who relocated to California a few years earlier. Kologo took English language classes through UC Riverside’s extension program and then enrolled at San Bernardino Valley College, a community college in Southern California, for two years.

“The transition from high school to Valley College was extremely hard,” Kologo said. “Coming to a new country and having to learn a new language at a grown age is challenging.”

Nevertheless, she persevered through the hardships of learning a new language and culture, and in 2020, she earned her associate degrees in mathematics and physics, and physical and biological science before being accepted to UCLA as a transfer student.

While at Valley College, Kologo worked as a lab technician and math tutor. The combination of her academic and work experiences prepared her well for UCLA, she said, but to begin her Bruin career through online learning because of the pandemic posed an additional challenge.

“I was extremely proud of myself for getting closer to my educational goals despite all the challenges,” Kologo said.

“I was extremely proud of myself for getting closer to my educational goals despite all the challenges,” Kologo said. “But I didn’t really get the chance to prepare for my transition to UCLA since my first year was entirely remote, and I, like many, fell into that quarantine routine. I wasn’t very motivated nor in the right mindset, which made my first year very hard for me.”

Despite the difficulties, Kologo said she still felt that she made the right choice. UCLA’s diverse student population and faculty with wide-ranging backgrounds made her feel comfortable as someone who grew up internationally.

“I love the diversity here, and I feel at home. When I hear a professor with an accent teaching the class, it makes me feel good and less bothered by my own accent,” said Kologo, a native French speaker.

Even before her first day of classes, Kologo said she felt supported as a UCLA student because of resources offered by programs such as the ones found at UCLA Samueli’s Center for Excellence in Engineering and Diversity (CEED).

“One of the first things I noticed about Awa was her determination to succeed,” said Cathy Douglas, director of CEED. “She was not afraid to ask for help immediately when she faced problems. She is confident in her abilities and does not let roadblocks get in her way.”

Kologo credited Cathy and the support of CEED for making her feel that she belongs at UCLA Samueli. “She and CEED are the only reasons why I am here,” Kologo said.

As a student worker at CEED, Kologo said she hopes to contribute to the program’s support for engineering students. She also helps outreach to other transfer students through her work at UCLA Samueli’s Transfer Student Center. To help tackle societal challenges as a civil engineering student, she is conducting research on seismic retrofits for underserved communities in Los Angeles through the UCLA Earthquake Brace + Bolt program.

With her June graduation fast approaching, Kologo says she hopes her own academic journey could serve as an example of improved access to higher education for traditionally marginalized communities.