UCLA engineers have made major improvements on their design of an optical neural network –a device inspired by how the human brain works – that can identify objects or process information at the speed of light.

The development could lead to intelligent camera systems that figure out what they are seeing simply by the patterns of light that run through a 3D engineered material structure. Their new design takes advantage of the parallelization and scalability of optical-based computational systems.

For example, such systems could be incorporated into self-driving cars or robots, helping them make near-instantaneous decisions faster and using less power than computer-based systems that need additional time to identify an object after it’s been seen.

The technology was first introduced by the UCLA group in 2018. The system uses a series of 3D-printed wafers or layers with uneven surfaces that transmit or reflect incoming light – they’re reminiscent in look and effect to frosted glass. These layers have tens of thousands of pixel points – essentially these are artificial neurons that form an engineered volume of material that computes all-optically. Each object will have a unique light pathway through the 3D fabricated layers.

Behind those layers are several light detectors, each previously assigned in a computer to deduce what the input object is by where the most light ends up after traveling through the layers.

For example, if it’s trained to figure out handwritten digits, then the detector programmed to identify a “5” will see the most of the light hit that detector after the image of a “5” has traveled through the layers. 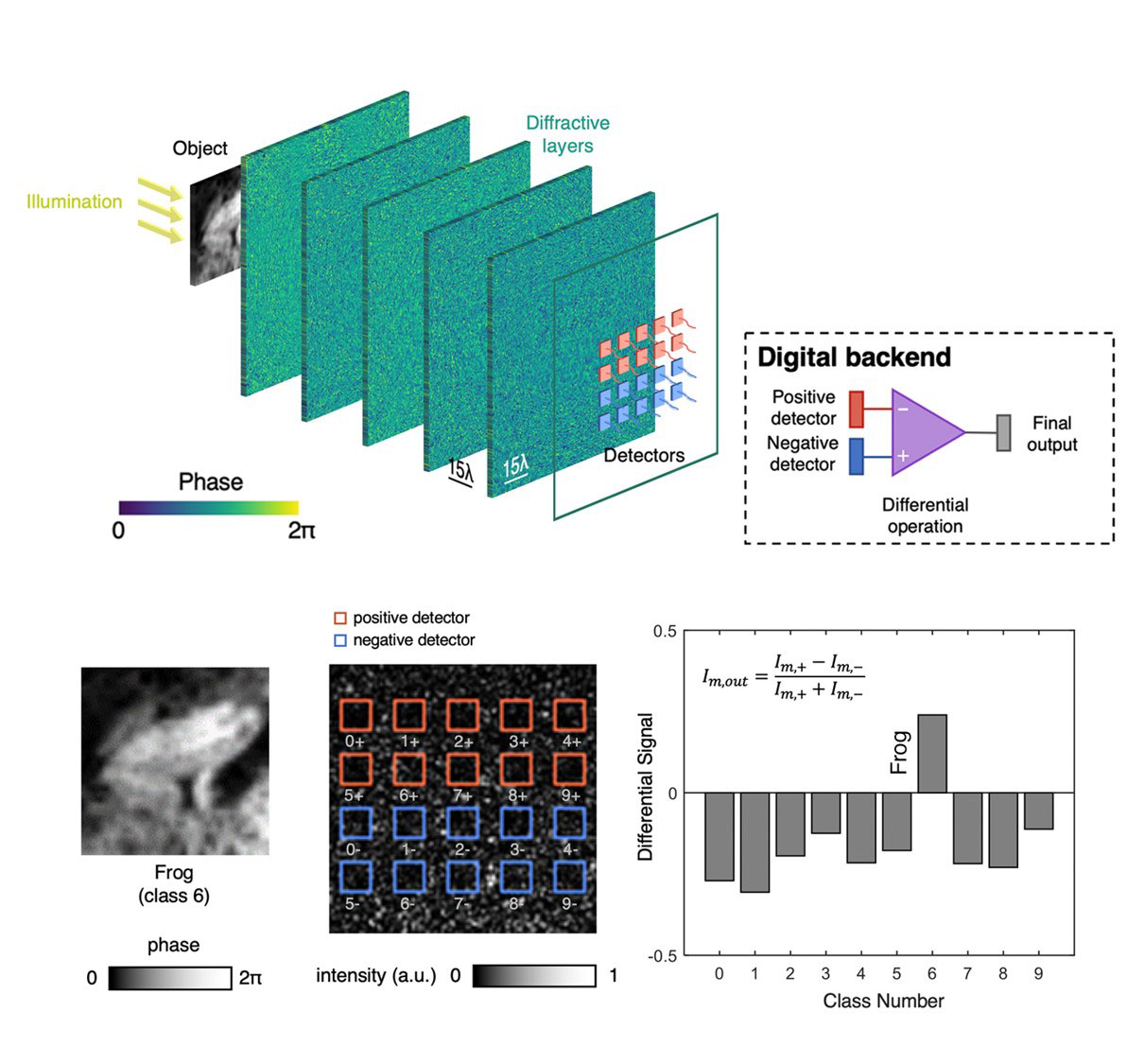 In this recent study, published in the open access journal Advanced Photonics, the UCLA researchers have significantly increased the system’s accuracy by adding a second set of detectors to the system, and therefore each object type is now represented with two detectors rather than one. The researchers aimed to increase the signal difference between a detector pair assigned to an object type. Intuitively, this is similar to weighing two stones simultaneously with the left and right hands – it is easier this way to differentiate if they are of similar weight or have different weights.

This differential detection scheme helped UCLA researchers improve their prediction accuracy for unknown objects that were seen by their optical neural network.

“Such a system performs machine-learning tasks with light-matter interaction and optical diffraction inside a 3D fabricated material structure, at the speed of light and without the need for extensive power, except the illumination light and a simple detector circuitry,” said Aydogan Ozcan, Chancellor’s Professor of Electrical and Computer Engineering and the principal investigator on the research. “This advance could enable task-specific smart cameras that perform computation on a scene using only photons and light-matter interaction, making it extremely fast and power efficient.”

The researchers tested their system’s accuracy using image datasets of hand-written digits, items of clothing, and a broader set of various vehicles and animals known as the CIFAR-10 image dataset. They found image recognition accuracy rates of 98.6%, 91.1% and 51.4% respectively.

Those results compare very favorably to earlier generations of all-electronic deep neural nets. While more recent electronic systems have better performance, the researchers suggest that all-optical systems have advantages in inference speed, low-power, and can be scaled up to accommodate and identify many more objects in parallel.

Other authors on the study include graduate students Jingxi Li, Deniz Mengu and Yi Luo; and Yair Rivenson, a UCLA assistant adjunct professor of electrical and computer engineering.

Ozcan also has UCLA faculty appointments in bioengineering and in surgery at the David Geffen School of Medicine. He is the associate director of the UCLA California NanoSystems Institute and is an HHMI professor.

The study was supported by the Koç Group, the National Science Foundation and the Howard Hughes Medical Institute.