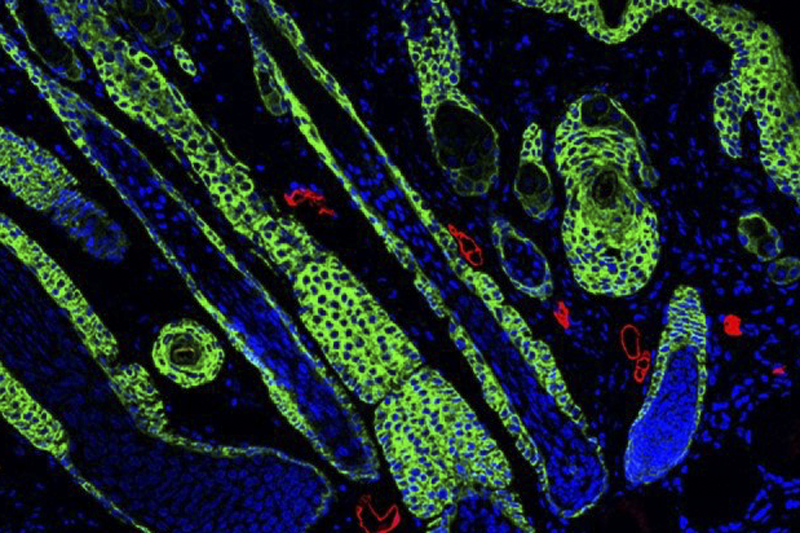 Duke University
The image shows regenerated hair follicles at the center of a wound. The hair follicles appear as tear drop structures, and they have Keratin 5 positive tips, which appear in green.

UCLA scientists with colleagues at Duke University and other institutions have developed a wound-healing biomaterial that could reduce scar formation, allowing skin tissue to regenerate, resulting in healthier and stronger skin. The team found that the new hydrogel triggers an immune response normally involved in long-term immunity to pathogens or vaccines, and this immune response was critical for the hydrogel to induce tissue regeneration.

The researchers suggest the gel could be used to heal injuries such as burns and deep cuts, as well as diabetic ulcers and other wounds that generally heal with significantly noticeable scars that are more susceptible to re-injury.

The advance, published in Nature Materials, builds upon UCLA’s 2015 research development of injectable microporous annealed particle (MAP) gels. Composed of microscopic spheres and applied to a wound, the gel can act as a highly porous scaffold that allows new tissue to latch on and grown within the cavities between the gel’s linked spheres. As the gel gradually dissolved, however, it started to lose porosity, thereby limiting support needed for the tissue to repair properly.

Rather than creating an entirely different gel with new materials, the researchers hypothesized that by slowing down the gel-degrading process, it would allow new tissue more time to grow into the scaffold. They switched in a different type of amino acid, the mirror image of the ones typically used to make proteins within the body, to act as the chemical link to other molecules in the gel. Much to their surprise, the modified gel placed in mouse wounds actually disappeared from the wound site almost entirely within three weeks, leaving behind just a few particles.

“There are two types of immune responses that can occur after injury –– a destructive response and a milder regenerative response,” said co-corresponding author Dr. Philip Scumpia, an assistant professor in the division of dermatology at UCLA Health and the West Los Angeles VA Medical Center. “When most biomaterials are placed in the body, they are either pushed out like a splinter or walled off by the immune system and degraded or destroyed, but in this study, the immune response to the gel induced a regenerative response in the healed tissue.”

With the new gel, the regenerated tissue is much stronger, with hair follicles and sebaceous glands — instead of scar tissue — forming correctly over the scaffold. The researchers determined that the amino acid they used, one not found naturally in the body, was the key behind the regenerative immune response and improved healing.

“The modularity of the chemical and physical properties of the spherical gel building blocks, which we manufacture using scalable microfluidic chips, is a key advantage of the system that enables precise tuning for an optimal tissue response,” said Dino Di Carlo, a senior author on the study and professor of bioengineering at the UCLA Samueli School of Engineering.

The study’s co-lead authors are Donald Griffin, an assistant professor of biomedical engineering and chemical engineering at the University of Virginia, who helped develop the original gel while he was a postdoctoral scholar at UCLA Samueli; and Maani Archang, a graduate student in Dr. Scumpia’s and Dr. Di Carlo’s labs.

The study’s other corresponding author was Tatiana Segura, a professor of biomedical engineering, neurology and dermatology at Duke University, who was a professor of chemical and biomolecular engineering at UCLA Samueli when the work on the modified MAP gel was initiated.

The team also worked with Maksim Plikus, a regenerative tissue expert and professor of developmental and cell biology at UC Irvine. The technology is licensed by Tempo Therapeutics, a UCLA startup, which is commercializing the MAP hydrogel to regenerate tissue in complex wounds.

As the researchers continue to study the regenerative immune response to the new MAP hydrogel, they are also exploring the possibility of using the gel as an immunomodulatory platform for tissue regeneration and vaccine development.