Making the Most of Online Learning — an Audience with Internet Pioneers 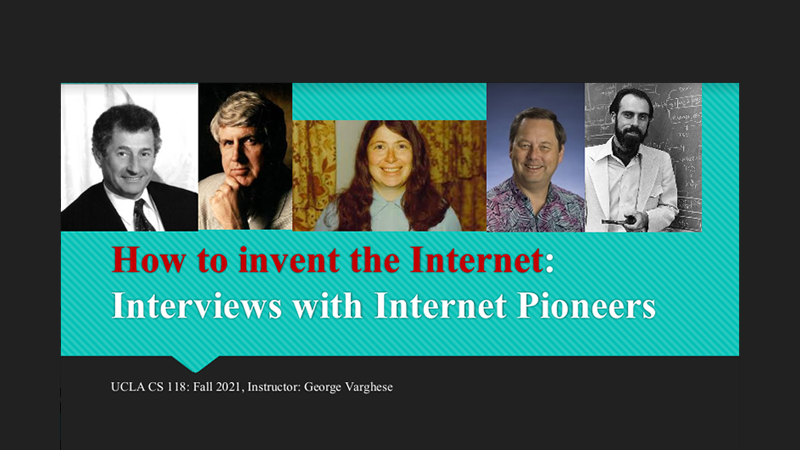 When the COVID-19 pandemic first hit in March of 2020, it took some creative thinking for faculty across the globe to transition in-person lectures to virtual instruction. But UCLA computer science professor George Varghese found a silver lining.

“It struck me that Zoom, while it lacks physical presence, makes it possible to interview any expert anywhere in the world in class without the expense and hassle of travel to Los Angeles,” Varghese said.

The UCLA Henry Samueli School of Engineering is the birthplace of the internet, without which remote learning and work would not have been possible over the past 18 months. So what better way to teach a class of future engineers and computer scientists, Varghese thought to himself, than to have the students learn the origin of the internet directly from its pioneers?

That’s exactly what Varghese did for his fall quarter 2020 lectures, supplementing his undergraduate computer science networks course with live Zoom appearances from five scientists who brought the internet to life.

The guests included UCLA Distinguished Professor Leonard Kleinrock, who developed the mathematical theory of packet-switching that underpins the internet and directed the transmission of the first internet message from 3420 Boelter Hall to the Stanford Research Institute on Oct. 29, 1969; UCLA alumnus Vinton Cerf M.A. ’70, Ph.D. ’72, the co-inventor of transmission control protocol/internet protocol (TCP/IP); Robert Metcalfe, who invented Ethernet technologies used in local area networks; Radia Perlman, who invented the spanning tree protocol that connects Ethernet networks; and Paul Mockapetris, inventor of the internet domain name system (DNS). The class of 160 computer science students was able to pose questions for these internet inventors over the course of five, 40-minute interview sessions.

In late October, Varghese posted highlights of the recorded interviews in a YouTube video titled “How to Invent Anything – Using the Internet as an Example.” The video has been viewed by thousands and shared by many on social media.

Through this exercise, Varghese was able to illustrate some of the internet inventors’ firsthand experiences that he hopes will serve as a blueprint and inspiration for all students.

On Dec. 14, Varghese and fellow UCLA computer science professor Lixia Zhang were inducted into the Internet Hall of Fame’s 2021 Class. The honor “recognizes individuals worldwide who have played an extraordinary role in the conceptualization, building, and development of the global Internet and recognizes those who have made crucial, behind-the-scenes contributions.”