Jason Droege: From a UCLA dorm room to leading UberEverything

Jason Droege came to UCLA in the mid-90s to study film and get away from the Bay Area’s tech culture That didn’t last long. As a student, he quickly became interested in the emerging internet’s commercial potential. He changed his major to computer science and he dove head first into an entrepreneurial career while still living in the dorms.

With two decades and several successful starts-ups under his belt, Droege, who is Uber’s vice president of UberEverything, returned to UCLA on January 15. He spoke in front of a full house of UCLA Samueli Engineering students in the second program of the year in the Ronald and Valerie Sugar Speaker Series. 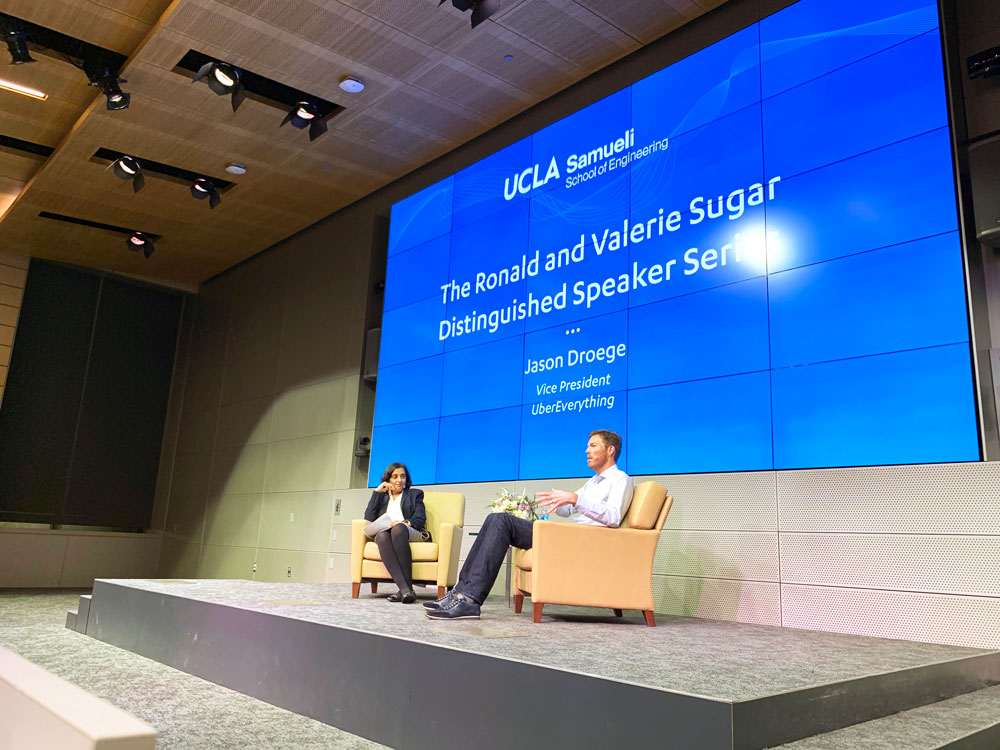 Droege was interviewed by Jayathi Murthy, UCLA Samueli’s Ronald and Valerie Sugar Dean of Engineering in the Dr. William Mong Memorial Auditorium. At Uber, he oversees Uber Eats, an on-demand food delivery app and website available around the globe.

“I raised a few hundred ‘K’ while still in the dorms,” he said “Then I took a year off to give it a shot and raised $4 million and decided to stick with that.”

The company only lasted a few years but Droege found his entrepreneurial calling in internet-based technologies. Following Scour, he held executive roles in e-commerce, enterprise software, and internet services companies.

Still for the entrepreneurial-minded students in the audience, he offered cautionary advice on what they’ll face.

“The pressure of being an entrepreneur is intense,” he said “It’s good to be naive. If you knew what you were getting into, no one would say, ‘Yes, that sounds awesome!’”

In 2014, Droege joined Uber to lead their division called Uber Everything. It was started figure out what other businesses the San Francisco-based ride sharing company could venture into.

“We ran three experiments, like a convenience store on wheels,” Droege said. “But food was the winner. From day one it was a huge hit. You don’t see consumer interest pop like that unless something is really there.”

That something is Uber Eats, an on-demand food delivery app and website that delivers food in as little as 31 minutes. Fast forward to today and Uber Eats has partnered with more than 160,000 restaurants, in 350 markets, across 35 countries and six continents. Its offerings range from mom-and-pop neighborhood favorites to global chains like McDonald’s and Starbucks.