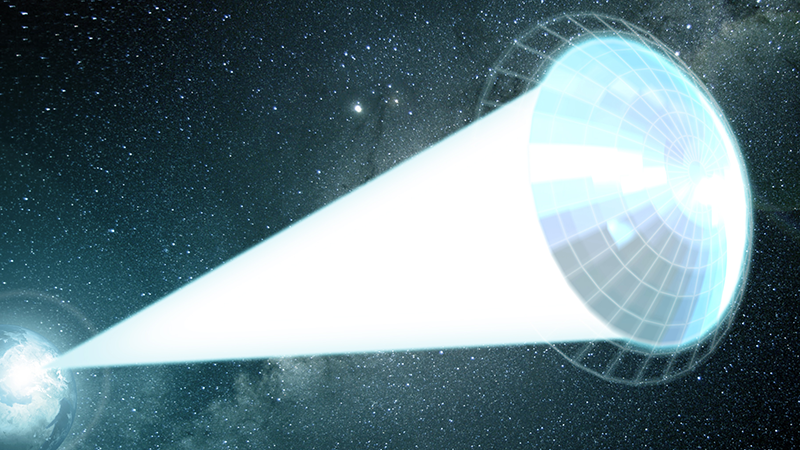 UCLA Samueli
Getting to another star system? It’s commonplace in science fiction. Simply switch on the “hyperdrive” or “warp drive,” depending on the fandom one prefers and you’re there. But getting it done in reality is no easy task.

Traveling to Alpha Centauri, our nearest star system neighbor at 4.37 light years away, would take much more than a lifetime. Even one of the fastest probes humankind has launched, Voyager 1, would take more than 70,000 years to arrive there at its current speed of 61,500 kilometers per hour.

Still, the tantalizing prospect of reaching other stars in our lifetimes has motivated many engineers to come up with creative approaches to accelerating spacecraft propulsion, including laser-driven light sails. Instead of harnessing the wind like their ancient shipboard cousins, light sails are propelled by light reflecting off their surfaces.

Funded by Breakthrough Starshot, a $100 million research and engineering program seeking to develop a new technology for un-crewed interstellar travel, the research was recently published in Nano Letters. In two separate papers, the groups proposed and evaluated new concepts in the shape, size and materials of future light sails designed to accelerate quickly while staying cool so they will not overheat and evaporate in space.

A powerful laser pulse beamed from Earth’s surface would provide the push needed to reach the great speeds required for faster interstellar travel. This beam would accelerate a small “nanocraft”, no heavier than one-third an ounce, through the vacuum of space. If designed correctly, such a spacecraft could reach speeds around 20% of the speed of light, about 3.6 million kilometers per hour. At those speeds, Alpha Centauri-bound spacecraft could reach their destination in about 30 years and could then beam images and measurements back to Earth.

Humanity has never accelerated macroscopic objects to such relativistic speeds before. To achieve this breakthrough, extreme properties are required of all components involved, from the lasers to the ultralight probe, as well as the sail itself.

The sails must be extraordinarily light — much lighter than a feather — yet able to adequately reflect the laser’s light to propel itself forward. A sail that is about 2 meters in diameter might weigh less than a gram, or a few thousandths of a pound.

In one of the papers, the research groups addressed a fundamental challenge faced by laser light sails: absorbing even a small fraction of the laser light on a sail could destroy it.

“We demonstrated designs that have the ability to quickly accelerate the sail and the craft it’s pulling along, while making sure it doesn’t disintegrate immediately.” said Aaswath Raman.

“Unfortunately, when you aim a powerful laser at something, even if it absorbs a very tiny fraction of that laser light, it will tend to get really hot,” said Aaswath Raman, a UCLA assistant professor of materials science and engineering who led this study. “We aimed to solve this problem by designing nanoscale light sails that leverage unique material properties and optical behaviors that arise when materials are structured at scales comparable to the wavelength of incoming light. We demonstrated designs that have the ability to quickly accelerate the sail and the craft it’s pulling along, while making sure it doesn’t disintegrate immediately.”

Previous research on light sails has focused on increasing vehicle speed at the expense of durability or vice versa, but the UCLA-UPenn team aims to strike a realistic balance between both.

The team incorporated molybdenum disulfide, an emerging atomically thin “2D” material with a high index of refraction, along with silicon nitride, a material that also has the properties needed to radiate heat away effectively. Their modeling shows that this sail design could not only survive the initial acceleration phase that propels the light sails forward but also reach the target velocity at a distance close to Earth. This is important because the laser targeting the sail will be beamed from Earth and cannot propel the sail once the vehicle gets beyond a certain distance.

The new sail material could be incorporated into a design in which very small squares of the fabric, about one hundredth of a millimeter in area, are lashed together, rather than a single sheet, to further improve heat dissipation.

The lead author on the paper is John Brewer, a UCLA doctoral student advised by Raman and supported by a National Science Foundation Graduate Research Fellowship. Other senior authors on the paper include Penn Engineering’s Deep Jariwala, an assistant professor of electrical and systems engineering, and Igor Bargatin, an associate professor of mechanical engineering and applied mechanics. Additional authors include UCLA undergraduate student Sachin Kulkarni and Penn Engineering postdoctoral researchers Matthew Campbell and Pawan Kumar.

In the second paper, the researchers proposed that the sail’s design should allow it to bulge out, more like a parachute, instead of being flat.

“The intuition here is that a very tight sail, whether it’s on a sailboat or in space, is much more prone to tears,” said Bargatin, who led the study. “It’s a relatively easy concept to grasp, but we needed to do some very complex math to actually show how these materials would behave at this scale.”

Rather than a flat sheet, Bargatin and his colleagues suggest that a curved structure, roughly as deep as it is wide, would be most able to withstand the strain of the sail’s hyper-acceleration, a pull thousands of times that of Earth’s gravity.

Campbell was the lead author on this paper. Other authors include Brewer, Jariwala and Raman.

Breakthrough Starshot is part of the Breakthrough Initiatives, a suite of space science programs investigating the fundamental questions of life in the universe. Funded by the Breakthrough Foundation, these philanthropic initiatives were established by Yuri and Julia Milner.