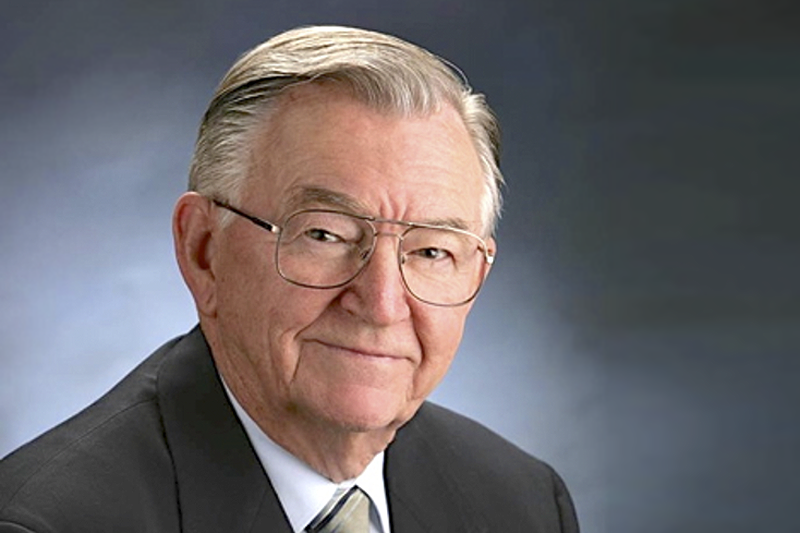 Lawrence E. Tannas Jr., a visionary engineer who pushed the evolution of the electronic displays industry from its early days in avionics to a global presence, and a longtime supporter of the UCLA Samueli School of Engineering, died last Friday due to illness. He was 84.

Known as “Larry” to all, Tannas earned a bachelor’s and master’s degrees in engineering at UCLA in 1959 and 1961, respectively.

After graduation, Tannas worked in Southern California’s burgeoning aerospace industry. He developed automated landing systems at General Electric Co., designed the backup reentry-guidance display for the Apollo reentry vehicle at Honeywell International Inc., and at Martin Marietta Inc., he created a cockpit for the SV-5 manned space vehicle — an Air Force prototype that was an important predecessor to NASA’s space shuttle.

As Tannas progressed in his career, he began to specialize in technologies for flat-panel displays, in particular, liquid crystal displays or LCDs.

Long before flat screens replaced the bulky cathode ray-tube computer monitors and televisions in every household, and later, on mobile phones that never leave our side, Tannas was instrumental in the early growth of this technology and its evolution. It was his work at Rockwell Autonetics in the 1970s that established the world’s first production line for LCDs. He then perfected a manufacturing process for electroluminescent displays while at Aerojet Electro-Systems Corp.

In 1999, he founded Tannas Electronic Displays, Inc., which specialized in research, development, manufacturing and licensing of intellectual property for resizing LCDs. In 2015, he sold the company to Pixel Scientific Inc., but remained active in the industry as president of the consulting firm Tannas Electronics. Throughout his career, he was awarded 28 patents and had more than 10 others pending.

Parallel to his pioneering career, Tannas was also a proponent of elevating electronic displays, also known as information displays, to be a vibrant scientific field in its own. He was a fellow and past-president of the Society for Information Display (SID), and was recognized with the SID Lewis and Beatrice Winner Award for exceptional and long-term service to the organization, as well as its Slottow-Owaki Prize for outstanding teaching. In 2012, SID held a 50th anniversary celebration at UCLA where it was founded. Tannas, who was serving as the organization’s archivist and historian at the time, wrote about the event as well as the organization’s broader history on its website.

Tannas and his wife of 64 years Carol were longtime supporters of UCLA Samueli where he served on the Dean’s Executive Board.

“Larry Tannas was a wonderful friend and a tremendous supporter of our school,” said Jayathi Murthy, the Ronald and Valerie Sugar Dean of Engineering at UCLA Samueli. “He cared deeply about our students, faculty and the world-class engineering education we offer. I will miss his counsel greatly and our hearts go out to his wife Carol and to his family. Larry will be missed immensely by many, especially at school events, where everyone remembers his friendly and gregarious nature. His legacy will live on for generations to come.”

From 1980 to 2000, Tannas developed and taught advanced engineering classes on information displays at UCLA Extension, as well as at other institutions. He was also the author of more than 50 technical papers, and wrote and edited the first definitive book on flat-panel displays, “Flat-Panel Displays and CRTs,” published in 1983 by Van Nostrand Reinhold.

Tannas and his wife of 64 years Carol were longtime supporters of UCLA Samueli where he served on the Dean’s Executive Board. Their first donation to the school was in the late 1960s, long before fundraising became a key part of how the university supports its programs and operations.

The couple had given major gifts to the school’s capital programs, including toward the Engineering VI building, which was completed in 2018 with an alumni suite that bears their name. Most prominently, the Tannases created two endowed faculty chairs at the school, both named in their honor.

In 2012, Tannas received UCLA Samueli’s Distinguished Professional Achievement Award which recognizes outstanding alumni, and in 2017, the school’s Lifetime Contribution Award, an honor for individuals who have made a lasting impact across generations of engineers.

In addition to his deep involvement with SID, Tannas was a Life Member of the Institute of Electrical and Electronics Engineers and the American Institute of Aeronautics and Astronautics.

At UCLA, Tannas also served on the Galactic Center Group Board of Advisors and the Samueli Reunion Committee. He was close to many of his fellow 1959 graduates from the then UCLA College of Engineering and was very active in organizing their class reunions.

An avid aviator, Tannas flew his own airplane from 1960 through 2013 and it was during these flights when he learned many lessons in display technologies and how they are used.

Along with his wife Carol, Tannas is survived by his son Lawrence Tannas III, his daughters Diane Sandberg and Laura Skiff, and 10 grandchildren.