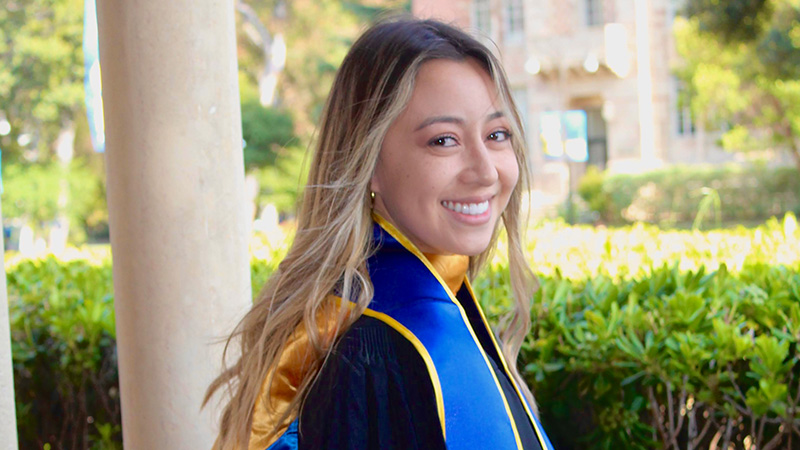 Courtesy of Lea Alcantara
Lea Alcantara saw an opportunity to build connections among students in her master’s program and she responded by planning social events including a Friendsgiving.

Lea Alcantara knows how to take a punch. As a member of her college’s boxing club when she was an undergraduate, she learned how to throw a punch, too. But it’s not just boxing opponents that Alcantara has faced and overcome.

As part of the inaugural graduating class in the UCLA Samueli School of Engineering’s one-year, on-campus master of engineering professional degree program, which launched last fall, Alcantara has overcome challenges both in and outside of the ring over the course of her academic journey, including coping with learning disabilities earlier in her career.

The first woman in her family to pursue a career in engineering, Alcantara is looking forward to earning her master’s degree this summer. She chose the program at UCLA over other graduate schools because of its multidisciplinary approach and its emphasis on integrating technical skills with business training, including an industry-sponsored capstone project and internship opportunities with major companies like Google and Boeing.

Not only has Alcantara been able to pursue her interest in data science at UCLA, but she also got to work as a teaching assistant for undergraduates. The course she taught, on big data in environmental science, challenged her to design new ways to teach coding to people of all backgrounds.

Shortly after she arrived at UCLA, Alcantara recognized the need to cultivate a sense of community for those in the new master’s program, especially because many among the first cohort of nearly 40 are international students. Realizing that forming connections with other students would be even more of a challenge because of the COVID-19 pandemic, Alcantara took matters into her own hands, organizing social events designed to make her fellow students feel welcome and included.

Her persistence paid off in November, when the class of 2022 gathered for a Friendsgiving celebration, sharing traditional Thanksgiving cuisine as well as dishes from the students’ home countries.

“Now, as a cohort, we have a much greater sense of community and are fortunate to be able to learn more about everyone’s cultures,” Alcantara said.

“Now, as a cohort, we have a much greater sense of community and are fortunate to be able to learn more about everyone’s cultures,” Alcantara said.

Alcantara also came up with an idea for an alumni association specifically for graduates of the MEng program, so that she and her peers can serve as mentors and industry liaisons for the UCLA students who follow in their footsteps.

She is currently working with engineering school leadership to bring that plan to fruition.

Alcantara came to UCLA after earning her bachelor’s degree at UC Berkeley, where she majored in data science with emphasis in environment and ecology and public health. But her path to Berkeley wasn’t easy.

Throughout high school, Alcantara suffered in silence with undiagnosed dyslexia and attention-deficit/hyperactivity disorder. She said she felt unable to share her struggles with anyone close to her because of the stigma associated with learning disabilities society.

“This type of problem is not one that was acknowledged nor respected in my culture back then, so I had really no choice but to work much harder just to keep up,” she said.

Alcantara took a gap year before college, largely to give herself time to better understand how to work with her learning disabilities. It was during that period that Alcantara decided she wanted to pursue a career in a STEM field — science, technology, engineering or math — reasoning that it would be the best way for her to make a positive impact.

The extra time taken to acclimate herself for a college education enabled Alcantara to navigate UC Berkeley successfully. She earned her bachelor’s degree in just three years and was an active member of various entrepreneurial organizations.

It was also at Berkeley that Alcantara took up boxing. The club she joined provided her with a sense of home and community, and the sport instilled in her a deep sense of grit and perseverance. “Boxing taught me that no matter how many times you are punched, you must keep fighting,” she said.

Although she no longer boxes competitively, Alcantara has continued to practice throughout her year at UCLA.

“I think my experience with boxing displays a clear parallel with my experience as a minority woman in STEM,” she said. “In both, however, I have not let the doubt about my abilities and passions deter me from pursuing what I most enjoy — even though it can be extremely difficult at times.”

Now, as she prepares to embark on her next journey, Alcantara said she hopes to use what she has learned to help combat climate change and improve public health, either as a data scientist or machine learning engineer. And she hopes to give back to the UCLA community as an alumna.

Natalie Weber contributed to the story.