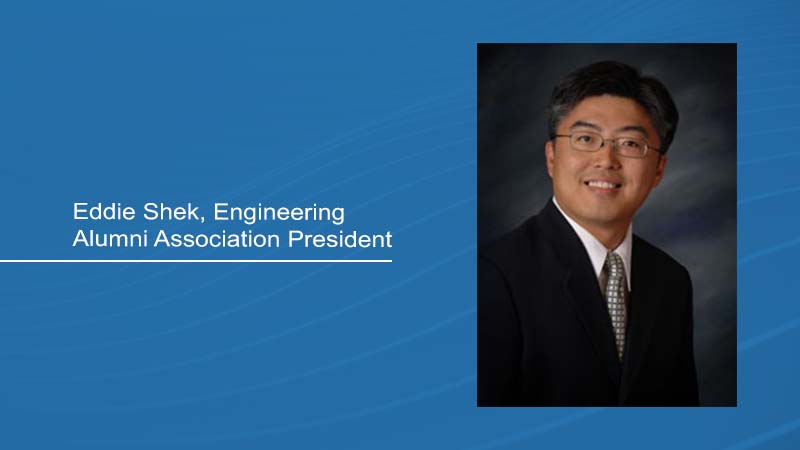 While he was a doctoral student in computer science under the guidance of distinguished professor Richard Muntz at the UCLA Samueli School of Engineering, Shek often went from finishing a full day’s work at Malibu-based research center HRL Laboratories straight to conducting his Ph.D. research in the evenings. He would study through the night and leave just as the sun began to bathe campus in a warm glow to repeat the cycle all over again.

“My best memory was actually walking through campus at 6 a.m., going into the parking lot. It’s such a beautiful campus, [and at that hour] it’s serene and quiet,” said Shek, the newly elected president of the UCLA Samueli Engineering Alumni Association (EAA)’s governing board. He succeeded Marianne So B.S. ’07, M.B.A. ’17, who served as president from July 1, 2018 to June 30, 2022.

While keeping a schedule with little to no sleep sounds grueling to most, Shek said he hardly noticed it while doing research on a communication optimization framework.

“I didn’t feel it. It was the fun of the work itself. It’s the excitement of trying to make something new,” Shek said.

After five years of late nights and early commutes, the double Bruin earned his Ph.D. in 1997 and continued to work at HRL as a researcher and project manager. A few years later, he started his own tech company, Vizional Technologies, developing radio-frequency identification software applications designed to improve the efficiency and effectiveness of business processes by managing and tracing the physical movements of assets and inventory.

Shek later sold the enterprise to Maersk Logistics. But this was just the first in a string of his entrepreneurial ventures. Before becoming a business consultant, Shek founded multiple other tech companies, helping businesses manage their supply chains and products.

This was not the professional journey Shek had envisioned when he started his Ph.D. program.

“If you asked my 15-year-old self, no, I wouldn’t imagine myself being an entrepreneur,” he said. “I could see myself being a professor, which is why I started my Ph.D. in the first place.”

But Shek found that the path he ended up on not only was made possible by his Ph.D. program, where he made industry connections that led him to found companies, but it also has allowed him to be a lifelong learner.

Throughout his time as an entrepreneur and even after he transitioned into his current business consulting role, Shek has found time to mentor undergraduate and graduate computer science students at UCLA, an experience he finds rewarding.

“The kinds of tools they use, the way they approach problems is very different, so I do get a lot out of my interactions with students that I mentor from just thinking about how they think about things,” Eddie Shek said.

After this initial introduction, Shek quickly started finding more ways to be involved with UCLA Samueli, attending board meetings, reviewing student-led projects and offering help wherever he could.

Last year, Shek served on the association’s board as the awards committee chair, helping gather alumni nominations and promote the awards.

In his new role as the president of the EAA board, Shek said he’d like to accomplish a few goals in the two-year term. He plans to coordinate with the school’s different departments to help them expand their own alumni networks. He will also engage alumni outside of the Los Angeles area, fundraise for the school and support the school’s efforts in equity, diversity and inclusion.

“I’ve really enjoyed my time on the board and am definitely looking forward to continuing to play a role,” Shek said.

As the first in his family to finish college, Shek views being actively involved in the alumni community as an extension of the college experience. He has benefited a great deal from his mentors and advisors from his time at UCLA, so Shek hopes to return the favor.

“I finished my [undergraduate degree at Stony Brook University] in three years, so I spent way more time at UCLA; it’s a way bigger part of my educational journey and I definitely have to attribute whatever success in my career — in life — to my education,” Shek said. “It’s all about giving back.”

Launched in 1998, the UCLA Samueli Engineering Alumni Association has built its success on the generous support of the school’s many talented alumni who volunteer their time and efforts to help foster a welcoming and inclusive UCLA Samueli community for its more than 40,000 alumni. Please visit the association’s website at https://samueli.ucla.edu/alumni/ to learn more about its programs and activities.