Engineering and Basketball: Problem Solving On and Off the Court 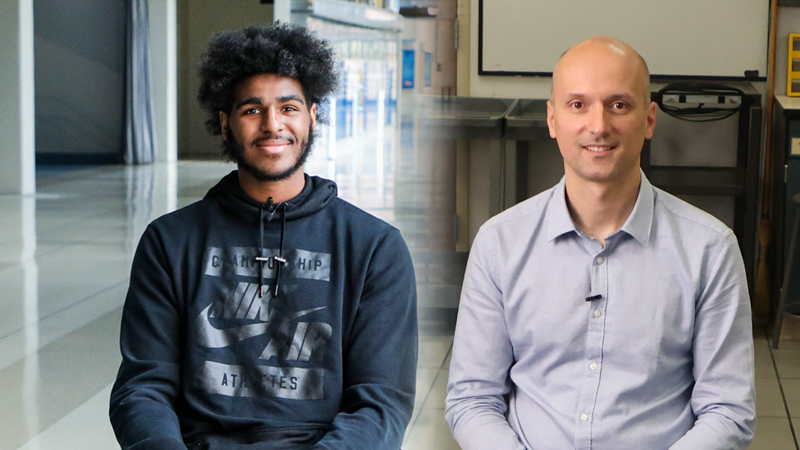 While the 2022 roster mainly consists of returning players, an impactful addition to the team this year is graduate transfer Myles Johnson, a 6-foot-10-inch center, who leads the team in blocks this season.

Johnson’s impressive record doesn’t stop at basketball. He is currently pursuing his master’s degree in electrical and computer engineering at the UCLA Samueli School of Engineering.

Johnson’s impressive record doesn’t stop at basketball. He is currently pursuing his master’s degree in electrical and computer engineering at the UCLA Samueli School of Engineering. He and his graduate advisor Dejan Markovic, professor of electrical and computer engineering, were featured in the most recent episode of UCLA Athletics’ documentary series “Westwood,” which highlights key members and milestones of the team.

Johnson was in the midst of a summer internship with IBM, but he wanted to discuss his course plans for the academic year with Markovic so he could get ahead in preparation for a busy basketball season.

We recently met with Markovic, a Serbian native who happened to cover many NBA games when he was in graduate school, about his experience working with Johnson.

Q: You mentioned you worked as a reporter covering NBA games while attending graduate school at UC Berkeley. Can you elaborate on that?
A: At that time, which was about 2002 to 2005, it was nearly impossible to get tickets to a packed ARCO Arena in Sacramento, and I had two fellow countrymen, Vlade Divac and Peja Stojakovic, starring on the team, so I asked radio and TV stations back in Serbia if they would give me a press pass. I ended up hitting a sweet spot with Serbian television and radio broadcast station B92 that, without my knowing, had TV rights for NBA broadcasts. A week later, I was on my way to ARCO to kick off the 2003 playoffs as a “reporter,” and it was a total blast! B92 was a perfect fit — it being a progressive media outlet. What else could you ask for as a Berkeley student?

Q: Can you tell us what it was like being an engineering student while covering sports?
A: It was a fantastic experience. Being able to gain access to locker rooms, media interviews, and getting to see the day-to-day life of the athletes, team personnel and other reporters — the legit ones. I got to cover the 2004 All-Star game in Los Angeles. Players appreciated my genuine interest in the sport and that I asked them insightful questions, followed their charity events and never looked for anything controversial. I would send sound bites that they approved for folks at B92 to transcribe and publish. One of my most widely cited reporting experiences is my impromptu interview with Chris Webber, which, thanks to ESPN, made it into the international feed. I “retired” in 2005 after watching many games in Sacramento and Oakland, when the Warriors were at the bottom of the Pacific Division, and went “undercover” to the 2008 Lakers-Celtics NBA finals. As an assistant professor here at UCLA, I have many great memories of that final series and playing NBA-hosted pickup games with international media representatives at the UCLA SAC gym.

Q: How has your experience working with NBA players helped you as an advisor to Myles Johnson?
A: It helped me understand his time commitments and dedication. It helped me understand how to balance his duties as an engineer and athlete. It also provided many insights into various aspects of the sport and his career planning. I’ve developed many connections in basketball in the past 20-plus years to gain good insights and appreciate Myles’ career plans. As he is a dual-path student, it comes natural to discuss engineering and basketball with him equally. We share similar interests, and it’s great to see a student like him. He is truly special.

Q: Can you tell us about the sweat sensor research Myles is working on? How did it come about and what does he plan to do with it?
A: It is still in the ideation stage, inspired by a National Institutes of Health study and Myles’ interest in measuring sweat response. I suggested this article to him, in which researchers measured sweat response and voluntary water intake at various temperatures to find minimal post-hydration sweating after a mild exercise in order to find the best natural body response. They found that 16°C (60.8°F) worked best for hydration. It could be an interesting project for Myles to explore further. The sample size used in the study is only four, and he can easily overcome that with his teammates and other athletes at UCLA and apply his knowledge of embedded sensing technology.

Q: What qualities do you think Myles possess that enable him to be successful both in his academic pursuit and in competitive sports?
A: Focus, determination, hard work. Honesty, integrity, accountability. He is a phenomenal young man.

Markovic’s research is focused on designing devices that can monitor brain activity in new and more precise ways. His most recent research on a wearable neuron monitor, dubbed “Neuro-Stack”, is available through the pre-publication service bioRXiv.

Johnson’s teammate and fellow engineering student Russell Stong, with whom we spoke last spring after he received the prestigious Elite 90 award, was also featured in the “Westwood” episode. Since its first airing Feb. 7, the YouTube video has had more than 2,000 views and was covered by ESPN.